A massive retail expansion and a Christmas shopping belch could leave Richmond bloated with space. 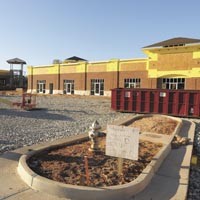 Not so long ago, visions of an upscale shopping mall at the epicenter of the Watkins Centre property off Route 288, surrounded by a faux Main Street, danced in the heads of retail-starved Chesterfielders. After years of planning, the county was set to capitalize on the promise of an extended Route 288 at Midlothian Turnpike, an exurban utopia filled with new urban streetscapes, offices and high-end shops.

Today, with the economy and credit markets in the tank and a bleak Christmas retail season on the horizon, the project's developers are more than happy to announce the shopping center, called Westchester Commons, is on target to open in March. Just don't expect a Nordstrom or a Saks. The good news: There's a Target, Petco, Regal Cinemas and Starbucks on the way. The bad news: the smaller retailers, unlikely to excite the Salisbury set, include Payless ShoeSource, Famous Footwear, Dressbarn, Cici's Pizza, Great Clips, Lee Spa Nails, GameStop and Five Guys Burgers & Fries.

Welcome to the land of powered down shopping strips. Westchester is on schedule to open about 80 percent leased, with more than 50 retailers signed on, which makes it one of the lucky projects.

Richmond is in the throes of one the biggest retail expansions in recent memory — 3.7 million square feet of new retail shopping in the pipeline from spring 2008 to summer 2009, more than the last four years combined and even bigger than the upscale mall boom of 2003 that brought Richmond Stony Point Fashion Park and Short Pump Town Center. This time around, however, it couldn't have come at a worse time. The recent financial meltdown on Wall Street has locked up the credit markets, and retail sales are already receding in what's promising to be an ugly holiday shopping season.

“From the pure retail side of it, I think we are going to have a pretty significant fallout after Christmas. There are chains that are simply not going to be economically viable,” says Brian Glass, senior vice president of retail brokerage at Grubb & Ellis/ Harrison & Bates. “I think it's going to be a pretty broad brush. If you are not No. 1 or No. 2 [in an industry] you really are in a bad place.”

An eight-ball shakedown is putting several major projects on layaway. Projects such as the Woodlands shopping center, featuring a new Costco behind Chesterfield Towne Center, have been quiet for months. A major residential and retail development on about 600 acres along state Route 10, called Watermark, is also on hold.

With so many new retail projects coming online, the recessionary limbo could lead to empty storefronts for extended periods. Projects such as West Broad Village near Short Pump featuring a new Whole Foods grocery store, and the White Oak shopping center in eastern Henrico, have already opened with major anchor tenants, but may struggle to bring in additional smaller retailers. Hancock Village, a 500,000-square-foot retail center that features a Wal-Mart and a new J.C. Penney off Hull Street Road near Woodlake, also recently broke ground.

“We had some delays getting Wal-Mart started and J.C. Penney,” says Douglas Horack, managing partner of EDCO LLC, Hancock's developer. “It took a long time.” Luckily, Hancock, a 428,000 square-foot project, had its chief anchors, Wal-Mart, J.C. Penney, Dick's Sporting Goods and Bed Bath & Beyond, signed months ago. Wal-Mart recently broke ground on its store (scheduled to open along with the rest of the center in July) but J.C. Penney's opening has been pushed back to March 2010.
For projects still in the financing stage, good luck. “We had already closed on our construction loans” before the recent meltdown, Horack says. “Those in the planning stage? If they haven't started, they probably won't.”

The bigger concern, say Horack and others, will be signing the smaller mom-and-pop retailers to fill out the new centers. With so many projects coming on, many worry that the credit crunch will leave the little guys, which are co-dependent on bigger anchors driving customers, in a lurch.

“Our property managers have had a number of smaller mom-and-pop tenants get behind” in rent payments, says Rob Black, vice president of retail services at CB Richard Ellis. Lawrence R. Agnew, an associate broker at the Wilton Cos., says smaller retailers, including franchisees, are stuck in financial limbo.
“Everybody is nervous about whether the small guy is going to make it through the decline,” he says.

In some of the niche markets, the mid-tier national retailers are already weeding out. Linens 'n Things, for example, recently announced it would liquidate and close all 371 stores by the end of the year. Many are similarly worried that Circuit City Stores, based in Richmond, could also go belly up after Christmas.

“Christmas retail is going to be very difficult,” Glass says. “Linens 'n Things is going to be liquidating. You have other retailers that are going to be on the edge.”
In the end, Richmond-area shoppers will just have to make do with scaled-backed retail centers such as Westchester Commons. Promises of upscale retail were dashed long ago, and with the struggling economy, that may be a good thing.

“The economy is having an affect on retail, clearly, but we have an impressive list of confirmed tenants, a superior location with great access and visibility,” Kelly Mize, a spokesperson for Zaremba Group, which is developing Westchester, says via e-mail.

Black, with CB Richard Ellis, says the county's refusal to issue bonds for the project a few years ago ultimately threw off the timing and scared off the original developer, Simon Properties, which planned an upscale lifestyle center that could have drawn more upscale anchors and retailers. Chesterfield, which has long taken a retail back seat to Henrico County and the West End, was denied its crown jewel.

“If you look at the demographics, it's a very high-income area. There incomes are strong there, so there's a bit of a disconnect,” he says of the southwestern tip of Chesterfield. “Unfortunately, that center is opening up a really rough time.”

Richmond has long been considered overbuilt with retail, Glass says. Even before the mass, three-million-square-foot buildup that started this year, Richmond had 57.2 square feet of retail space per capita, compared with a national average of 43.3 square feet per capita. So if a few of the projects get delayed indefinitely, that might not be such a bad thing as January approaches, and the post-Christmas blues set in.

“There are some nonanchored centers that will probably be postponed all around the metro area,” he says. “We don't know how long the economy is going to be in the doldrums.” S