Strip Mall Duck: Why the next great local chef might not be in the city proper.

Suburbanites are used to venturing to the city and struggling to parallel park for trendy dining, but now urbanites may find themselves making a reverse commute out to the strip malls. Shaved Duck restaurant, which opened in October, could hold its own in Scott's Addition or Church Hill. Instead, owner Joe Kmetz and chef Matt Kirwan planted this gem in the featureless parking lot that is Westchester Commons at Routes 288 and 60.

After visiting Shaved Duck, I will never again poke fun at suburb dwellers who complain about coming downtown to eat. I get it: We drove forever. The roads were scarily unfamiliar. I made wrong turns. It got so dark that I had to figure out how to use my high beams. Finally, I squeezed our Prius into a long row of black SUVs. I can't pull-in park to save my life. And there we were in Midlothian. Midlothian?

"Matt and I both grew up less than five miles down the road," says Shaved Duck owner Joe Kmetz, 31. "We went to Midlothian High School and our friends and family still live here. Midlothian made sense because we felt there was a huge gap for these type of restaurants on this side of town."

Kirwan, 29, started his culinary career at the Country Club of Virginia after high school. He helped open the Rogue Gentlemen and then ran the kitchen at Eurasia before moving to New York to cook for three years.

"I always wanted to come back to Richmond," Kirwan says. "Joe called me on, like, a Monday or Tuesday, and I was back down here that Sunday."

Suburban dining means this 138-seat restaurant serves more families and children than we see in downtown eateries. Seated at a table by the generous 16-seat bar — there is also a private dining room available — my husband and I had the best view of the open kitchen, staffed with a busy brigade of cooks managed by sous chef Milton Suarez.

Kirwan's menu is heavy on — surprise — duck. He breaks down the whole bird to render the fat, then makes confit and duck stock. Apart from a classic duck breast entree, Kirwan also works duck into the house-made fettuccine carbonara, duck ragout and various specials. We were happy to see that he often browns potato chunks in duck fat — a crispy, indulgent version of home fries.

Kirwan says his style is French bistro, and he delivers on that promise: The airy Parisian gnocchi features bits of sweet parsnips and tender Brussels sprout leaves, sprinkled with buttery toasted breadcrumbs. A light broth with crumbles of mild blue cheese and thyme brings together fat mussels and fingerling potatoes, which cry out for the crisp, mineraly albariño wine on the menu. His ragout with pappardelle is a warm homage to family cooking, updated with duck instead of beef. 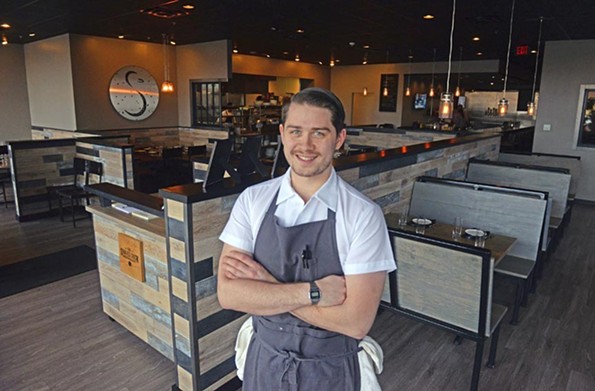 Young chefs have a tendency to get ingredient-happy, cramming too many confusing elements into dishes in efforts to dazzle diners with buzzword food. But Kirwan has confident restraint, creating texture and balance with a handful of harmonious ingredients.

Kirwan pulled a fellow Eurasia alum, Tori Sipe, from Lemaire to manage the bar. Shaved Duck's cocktail program is emerging under her deft hand with a mix of pre-Prohibition classics and modern twists. By the Fireside features Elijah Craig bourbon with orange and chocolate bitters in a coupe glass filled with cedar smoke. Unfortunately our bartender buried the preparation behind the bar instead of showing off the clever little hand smoker.

The eight taps, plus cans, lean strongly toward local brewery favorites alongside the requisite Michelob Ultra. The abbreviated wine list is more safe than sexy, with a notable lack of Virginians.

When we arrived at Shaved Duck early Saturday evening, the joint was full and the bar was buzzing. By the time we finished our meal at 8:30 p.m., we looked up to find an empty bar and a handful of tables on dessert.

Note to self: Head to the strip mall for next weekend date night. And learn to pull-in park.  S