Striking Workers in the Richmond Area Keep Pressure on Verizon

by Leah Small and Peter Galuszka 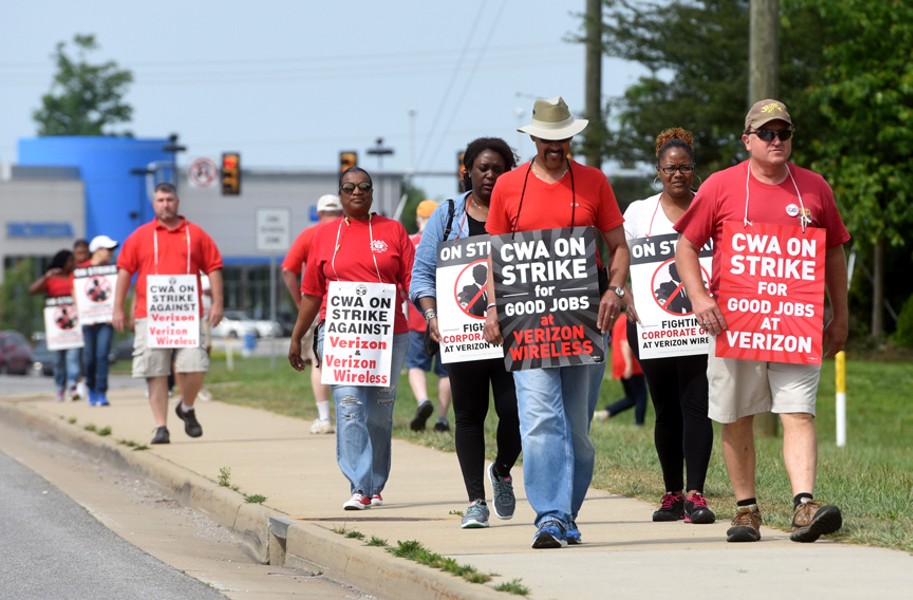 Scott Elmquist In their strike against Verizon Wireless, workers picket on Hull Street.

With the rain pelting down on a dreary day last week, Ryan Couch was one of a half-dozen union workers picketing outside of a Verizon Wireless store on Hull Street in Chesterfield County, just west of Brandermill.

Across the country, Verizon is working to negotiate terms with more than 40,000 striking workers, mostly in its wireline division, who have clamored for wage increases and more affordable health insurance since early April. Verizon's wireline division provides phone service, internet access and television to residences and small businesses, via copper wire or fiber optic cable.

The company has offered concessions, such as a 7.3-percent pay hike and budged on employee insurance contributions. But there are other concerns such as job outsourcing and a company practice of sending employees to work out of state temporarily. Verizon weathered a similarly large strike in 2011.

Couch, who is a Verizon technician, is a member of Communications Workers of America Local 2201. Next to him a colleague, who asks not to be identified, holds a sign that reads “CWA on Strike for Good Jobs at Verizon Wireless.”

“This is all about keeping good jobs in the community where we live,” says Couch, who’s been on strike for the past three weeks. “We have children here. We are soccer coaches.”

The average Verizon technician makes about $60,000 in base salary before forced overtime, Couch says. That work can boost salaries to about $85,000.

One problem is that Verizon isn’t filling jobs lost through attrition such as retirements and would rather have workers fill the gap with overtime, the two workers say.

Verizon says that it’s working to keep service disruptions to a minimum during the strike, and in the Richmond area has posted advertisements on its website for 11 temporary installation technicians. Dozens of candidates have applied, a company spokesman says.

Across the country, Verizon has hired thousands of temporary workers. In response, the union has dug in its heels by covering worker benefits with its $400 million strike fund.

The strike could be showing signs of pressure locally. Cynthia Mulvaney, clinic manager for the Spinal Correction Center of Richmond, says that the practice has been without Internet access for three weeks. She says she was put on hold for three hours during a call to Verizon’s tech support line.

Mulvaney says online access is imperative for the office, which uses a cloud-based system to store patient information. Verizon promised to send out a technician several times before a service representative eventually told Mulvaney that delays were due to the strike, she says. When a technician did arrive, the problem wasn’t fixed. Now Mulvaney says that the clinic is switching wireless service providers.

“You have to do what you have to do to maintain business as usual,” Mulvaney says. “We’ve had a good experience for nine years. I didn’t want to switch but it was frustration of them saying they were going to come and no one showed up.”

Editor's note: This story has been corrected to note that most of the roughly 40,000 workers on strike are part of Verizon's wireline, not wireless, division. We apologize for the error.