As the economy tanks, sponsorships and participation increase at some children's sports leagues; others crank up the salesmanship. 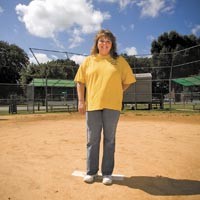 For Denise Dowdy, keeping children in play during the worst recession in 75 years is a daily struggle. As president of the Highland Springs Little League, the region's oldest youth sports organization, she struggles to find money to pay for uniforms, bring in new sponsors, declining revenues, participation and the weather.

But more importantly, she's battling to ensure that Little League, which offers baseball among other sports, remains accessible to its roughly 110 children who need stability now more than ever.

“Probably about 90 percent that play in our league are usually from a single-parent home or both parents are out working,” says Dowdy, a former business manager with Commonwealth's Juvenile Correction Centers' Youth Industries Program. “I don't want to see anyone in Highland Springs working in those facilities.”

The league's declining participation is the result of a mixed-bag of economic forces, Dowdy says: a sluggish economy, competition from travel squads for older players and a diversified array of sports offerings across the area.

“We've had several in the league where both parents have lost their jobs,” Dowdy says, “but in Little League we're not going to turn a child away.” Her league started fielding teams in 1954. “We're struggling this year paying for our uniforms,” she says. “We sort of cut back. We're biting the bullet right now to pay off those bills.”

Highland Springs, a minnow compared with regional giants such as Tuckahoe Little League or the Richmond Strikers Soccer Club, is persevering at a cost just like many other youth sports leagues. Unlike the on-field product, no clear story exists of winners or losers while organizations brave the recession. Broadly, establishments held their own during the year in terms of participating children, but fewer dollars for most programs has meant cost-cutting and creative measures to make up the shortfall.

Across the region, Chesterfield's youth leagues continued their relatively steady participation rates in the past eight years with around 30,000 youth. But they've been forced to do some belt-tightening, county athletic manager Bill Carlson says. Richmond saw a 23-percent increase to 6,346 children enrolled in youth sports, says Tesha Davis, a spokeswoman for the city's parks and recreation department. Henrico doesn't keep track of participation numbers, a county official says.

There are good reasons for the scattershot reaction. A recession means that fewer people take vacations, leading to more time in the community but it also could lead to fewer families spending money on sports and equipment. Even when an organization benefits from economic uncertainty — recreational sports serve as a low-cost activity in tight times — it often finds itself working with fewer funds.

“What's been happening in youth baseball and a lot of youth of sports, some of the competition is expanding so teams are traveling farther. … My guess is that families would be a lot more sensitive to the expense of that,” says Raymond D. Sauer, an economics professor at Clemson University. “Just in terms of people playing on the diamonds with their kids and their city leagues, I'd expect that to be pretty robust.”

Meanwhile, local governments, which maintain most of the public fields that youth sports groups use, struggle with their own budgetary constraints.

With a growing population and a constricted budget, parents and players might start seeing what Carlson called a “gentle reduction” here and there. In Chesterfield, the football and soccer fields will be lined every other week — rather than weekly — or the batter's box won't be lined for adult softball games.

For the Richmond Strikers Soccer Club, which plays both on public and private fields, times have been good. Participation has remained at its target level, even in more expensive options such as its 50 travel teams.

“I'm very positive. I think that a tough economy is playing into our hands,” the Strikers' executive director, Scott Turner, says. Recently the soccer club landed a new sponsorship deal with Volkswagen — which loans the Strikers a minivan — while local dealers were scaling back television advertising and looking for less-expensive promotional opportunities. The soccer club also recently began playing at new fields at Goochland County's West Creek business park, where Markel Corp. offered up 40 acres.

Such a picture can't be painted by the Glen Allen Youth Athletic Association, where the recession struck harder than anticipated.

“Concessions were down drastically,” says Patrick Logan, the association's president. “We run a fall baseball program and we have noticed registration is down.” Usually, he says, they're up 10 percent a year: “It's the first year anyone can remember our registrations are down.”

The summer's downturn — concession sales at games dropped by 30 to 40 percent — took Logan and the league somewhat by surprise. The organization expected some tough times, but the 2008-2009 winter basketball season saw no drop in activity, suggesting a cushioned economic blow heading into the busy baseball and softball seasons. He suspects that people are paring back the number of sports in which their children participate, rather than enlisting youths in a variety of programs.

Whatever the reason, the association faces some belt tightening.

“There's capital improvements that we're trying to do on our fields and facilities that we can't do because we don't have the revenue sources,” Logan says. “Our general registration money doesn't cover the cost of what it costs to put the uniform on the kid.”

The Greater Richmond YMCA faces a similar situation. Through Aug. 31, participation matches 2007 participation rates, but are down from last year. More telling is the amount of financial assistance the organization provides to members. The YMCA doled out $3,712 in sponsorships through June 30 to families in need of assistance through its Planting Seeds of Hope campaign.

“We won't turn away anybody,” says Drew Klammer, senior program director at the Tuckahoe YMCA. “If they come it and it's a financial situation, then we'll work it out on a sliding scale.” He adds that salesmanship's become more important: “I have to explain the value of what our kid is going to get out of the program. … They're going to meet friends, there's going to be camaraderie out of the team — it's more to it than soccer. We've got to explain it more than six, seven years ago.”

The financial situation caused a surge in membership for the city, Davis says.

“We've prided on being the most economical way to keep kids engaged and not on the streets,” Davis says. It's a resource for people who quite honestly can't go anywhere else.”

Even in a tight economy, the public investment in youth sports remains a socially profitable one, says Sauer.

“The public investments in ballfields and whatnot seem to me make a lot of sense,” Sauer says. “They'll be around when all these fashionable problems go away.” S