Tis the season for visitors, and whether they're here for the Virginia Museum of Fine Arts' "Hollywood Costume" exhibit or in town for Thanksgiving, the gallery scene offers some compelling entertainment. One of the benefits of living in a city with a world-class art school such as Virginia Commonwealth University is being able to catch artists on the way up. To that point, Page Bond Gallery's new show provides a look at two promising young artists worth checking out.

Like Marcel Duchamp and Robert Rauschenberg before him, Aaron Koehn appropriates the stuff of modern life and re-purposes it — through buffing, printing, chroming — to create something wholly his own.

"I'm drawn to objects not because of what they are but because of some sense of abstraction," he says, standing in the gallery and surrounded by his latest work, a major departure from the striking, light-filled paintings he'd last shown.

"On One," his latest exhibition, represents a shift in how the artist works. Previously he was, by his own admission, very meticulous, plotting out what was going to happen in each piece. "But I wasn't having fun with it anymore," he says. "Now I allow myself to not know what I'm doing before I do it." 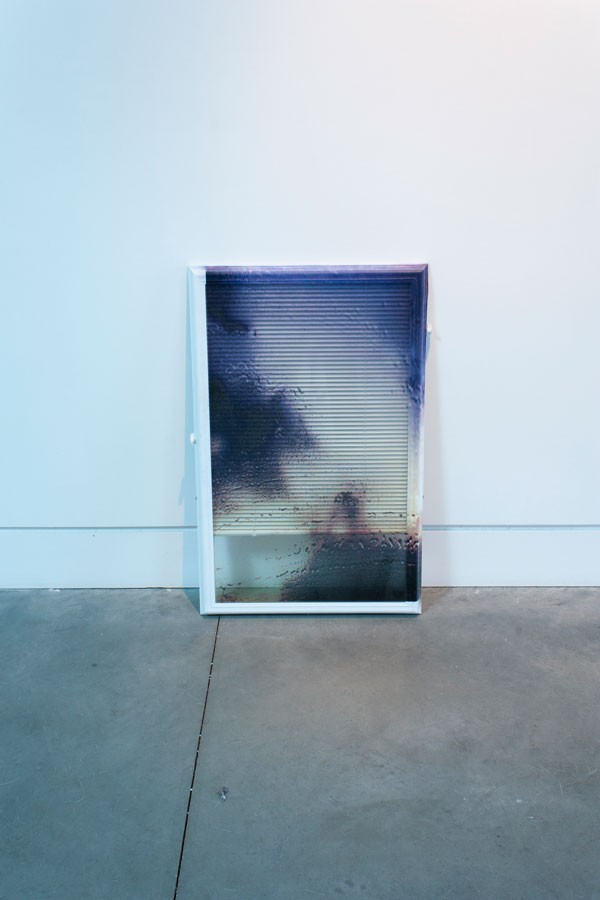 Pulling from his own history, multiple pieces in the show began with childhood drawings made before he was 6 and kept by his artist parents through the years. He scans the drawing, printing it on canvas, but because canvas isn't a truly flat surface, the image is skewed and morphs into what is essentially a new image based on the inconsistencies and variations of the process and materials. Each of these is titled "This Is Not Abstract Painting," with some done in color and others in black, with enough subtle variation in tone to see the childhood imagery.

"I hope people have a moment with the work," he says. "I expect people to project their own moments with it."

Sarah Irvin's "False Colors" represents just as much of a stylistic leap for her, with a new direction in technique and concept. The colorful abstract water lily blooms that once covered her canvasses and paid homage to her grandfather's water lily gardens in Texas have been replaced with abstract works with limited palettes that appear almost sculptural.

All involve the artist putting down text on yupo, a synthetic paper known for its ability to hold ink with precision, and then moving the ink around with a squeegee. By dragging the ink across the non-absorbent surface, wide, transparent areas of saturated color are created, almost resembling stained glass illuminated from behind.

Some have an almost photographic quality, causing viewers to read their own interpretations of the work. "I'm not taking away any ink, just rearranging it," Irvin says. "That way, there's not a trace of what it said before."

"I wanted to hone in on the fact that I'm hiding the text," she says. "With my work, material and process come after the idea. This gets at the limits and powers of language."

Like Koehn's, Irvin's work encourages a personal reaction that varies widely depending on what the viewer brings to the experience. It's the kind of show to see with others because the art inspires multiple viewpoints and conversation.

"I like mining the VCU student body for new and different artists," gallery owner Page Bond says. "People who like traditional art may not be instantly drawn to works like these, but they increase our visual vocabulary. It's important to stretch the public that way." S