Library of Congress Newsies such as Willie Hutchinson, 6, and Richard Green, 5, were tough-footed salesmen back in the day who did whatever it took to move newspapers. This photo dates from June 1911.

Inside his brick colonial home just west of Carytown, author Harry Ward sits surrounded by herons. Not live ones, mind you, but colorful portraits of the majestic, long-beaked birds crowding his living-room walls. He’s collected more than 30 of them, including a limited-edition print by famed naturalist John James Audubon.

Ward is a tall, 86-year-old former American history professor who taught at the University of Richmond from the mid-1960s until his retirement in 1999. He has a doctorate from Columbia and has written more than 20 books. The best-selling one was 1985’s “Richmond: An Illustrated History,” he says.

His latest book, “Children of the Streets of Richmond, 1865-1920,” came out last month. It uses newspaper accounts of court sessions to reveal a grim, matter-of-fact picture of local street life back when gritty couldn’t begin to describe it. This was a time when newspapers occasionally reported that an infant had been eaten overnight by rats — rodents that also liked to visit funeral homes and devour dead bodies. The U.S. Department of Justice of that day called Richmond’s legalized prostitution area on Mayo Street “the best in the United States.”

“The most redeeming characteristic of Richmonders in the late-19th and early-20th centuries was an avid sense of humor,” Ward writes in the preface.

His book is concerned with detailing the justice being delivered, or withheld as the case may be, to street kids and young adults in what was then known as Police Court.

“Little kids, 5-, 6-, 7-year-olds, would go before the judge with other adults,” he says. “The exchanges were very funny. Court reporters, including James Branch Cabell, the famous author, vied with each other to come up with the most amusing reports.”

In person, Ward comes off as defiantly old-school. We’re all too politically correct these days, he says, and he isn’t into the whole computer thing. Physically, he has trouble getting around, but that hasn’t stopped him from spending much of his time in the Richmond Public Library, researching for his books. Then he returns to his beat-up, old, yellow Deville Deluxe manual typewriter at home and starts cranking out pages.

One of his favorite lines from his new book sounds like a demented take on Garrison Keillor in its depiction of Richmond: “All the women were fine talkers, the men were hard workers and the boys made their living by throwing rocks.”

Ward says he was most surprised by the court’s ongoing use of corporal punishment. Whippings were meted out by the judge until around 1920, he notes: “I didn’t know Richmond was such a badass city.”

Edited excerpts from one chapter of Ward’s new book reveal details about newsies — the kids selling papers on street corners. Others focus on local prostitutes and Richmond’s former “legalized sin” district — which Ward may expand into another book, he says, after he writes about local buncos, or grifters, from the era.

It’s enough to make you thankful to live in more comfortable times, when a cellphone that runs out of juice is enough to set somebody off. Nor do you have to constantly duck rocks thrown from members of youth gangs with names like the Belle Isle Cats, Oregon Hill Cats (or the Terribles), or my favorite, the Male Orphan Asylum Cats.
— Brent Baldwin 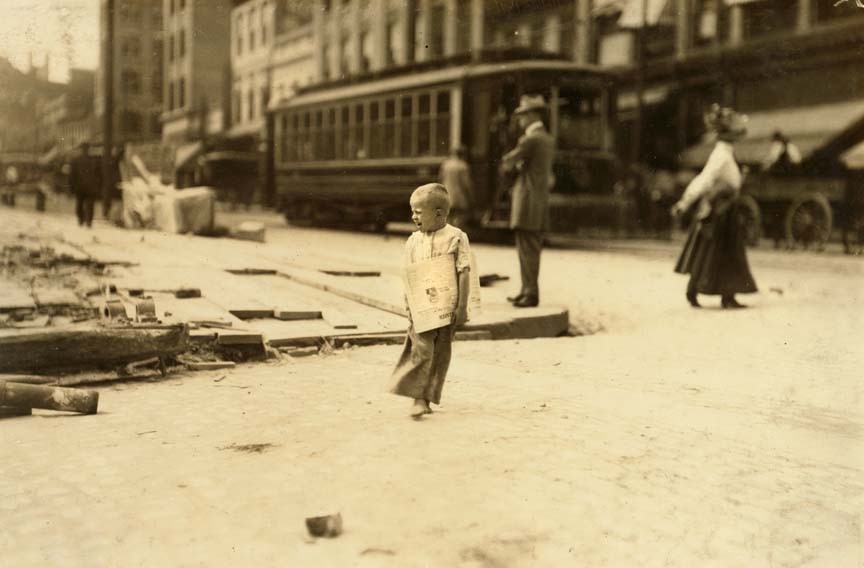 Newsboys and messenger boys formed a kind of subculture. They mostly came from poor families or were orphans. On the street with daily morning and afternoon editions, they sold the papers for a penny each, sharing the profits with a newspaper company or distributor. Both newsboys and messengers performed with a high sense of urgency, to make delivery as quickly as possible. Many of the newsboys were very young children, sometimes out on the street at ages 5 or 6.

Richmond’s newsboys (newsies) had much in common with their counterparts in New York or other large cities. They had to stand their own from harassment by officialdom or the public. Amidst the swarm of boys vying for the selling of papers, they had to defend their turf. “No Feudal Baron Ever Fought Harder for Lands and Title,” rang a headline in a newspaper on Dec, 21, 1906. The ensuing article noted:

They stood on the corner and glared at each other. Both had bundles of the last edition under their arms. One boy was in his own territory, the other strictly out of his. The newcomer knew perfectly well that he had no business on that side of the street, but he was the bigger, and bigness often counts — but not always.

“Whatcher doin’ on my corner,” yelled the smaller boy, furiously.

“Youse —.” But just then a prospective customer loomed up on the horizon, and both boys were off immediately. The gentleman shook his head, and passed between them, leaving the boys face to face, trying, in their enthusiasm, to sell papers to each other.

There was but one thing to be done, and the smaller newsy did it.

“Gwan off my corner,” he cried fiercely, and planted his hard little fist exactly between the larger boy’s eyes. Then things began to happen.

Throwing his papers away, the big boy naturally lit into the kid, first administering a severe kick, then, giving him a terrible blow on the side of the face with his open hand, he smacked him down in the street, the little boy falling full on his face on the hard pavement.
But far from taking the count, the kid was up in a second, then there was a blur of boys and newspapers. They resembled a flying wind-mill wheel throwing out newspapers in every direction.

Biff, bang! Then the wheel started on new revolutions, and the remaining papers sailed out into the air.

At this junction a passing gentleman interfered.

“There is a policeman coming up the street,” he said, smiling.

The big boy espied a customer way back across the street. He gathered up some of the scattered papers and ran off.

The little boy picked up his wares, rubbed his face with the back of his hand, and gazed triumphantly around upon his recovered territory.

The stentorian yells of some newsies led to complaints by citizens. In November 1910 the police accosted Harry Shatz, a small boy, for exerting “extraordinary lung power” that drowned out all other sounds at First and Broad streets. Shatz refused to be ordered away. “I’m out to sell papers, and I’m going to stick on this corner. You can’t pinch me because I ain’t done nothing.” The problem with Shatz wound up in Police Court, and Justice [John] Crutchfield rendered his decision:

“Newsboys are in their somewhat obscure, but none the less earnest, way, public benefactors. I’ve seen all varieties of them in travelling about the country, and it is their universal privilege to use the streets of a city as a trading place.

“In my opinion it would be the rankest kind of injustice to decide that newsboys could not stand on any street corner they might select and dispose of their papers. Some cities even extend the boys the privilege of boarding street cars. The kids engaged in this business in Richmond are a well-behaved, gentlemanly lot and I rule that just as long as they are orderly the streets are open to them. Regarding Shatz I can only say that I have seen him at work. He will never die with tuberculosis. His lungs are too all fired good. Case dismissed. …”