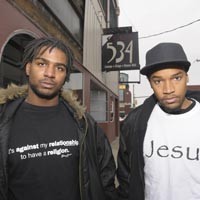 With his narrow dreadlocks and oversized jacket, Donovan Bates, 23, must have looked like any other club patron when he paid the cover charge and walked into Club 534 two days after Christmas. Instead of joining in the drinking and dancing, though, he started asking the other kids if they had repented yet.

The night ended with Bates and his buddy, Brent Evans Jr., 21, in handcuffs facing trespassing charges for refusing to clear the sidewalk after getting booted out of the club on Harrison Street near Virginia Commonwealth University.

The city dropped the case earlier this week.

It's the best luck Bates has had with the criminal justice system in a long time. He says he initially found Christ in 2006 while doing time on weapons possession charges.

Bates and his friend practice a sort of freelance preaching, hitting clubs to spread the word, but they seem almost as committed to getting kicked out as they are to Christ.

They met last year on the local poetry-reading circuit, performing Bible-heavy compositions that eventually got them banned from the weekly poetry readings at Tropical Soul and a few other gatherings around town. They gave up the poetry and went back to plain old preaching in April.

Getting kicked out of a string of churches, meetings and nightclubs preceded the 534 incident. They refused legal counsel, preferring to hire Jesus, esquire.

In the courtyard behind the city's Public Safety Building, Mark Godwin, the policeman listed as the complainant in the case, approached the pair. He told them that as a devout Christian himself, he understood what they were trying to do, but suggested they go about it in a different way.