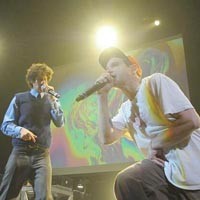 I know what you were thinking. There's a historic presidential election next week. I've got to find Sheryl Crow, so she can sing one of her bland hits that sounds like a Revlon hair commercial, then I'll know whether to vote. And if you could please just throw in laid back, barefoot surfer dude, Jack Johnson, everything will become illuminated, like a brushfire sunset among friends.

Well, the Get Out and Vote tour stopped in Richmond -- so you were in luck.

All five of the major artists on Tuesday night's bill were clearly for Obama, and they made a few vaguely condescending pleas to vote and help change the current path of America (the polling place isn't scary, really!), but to their credit, most of the political yammering was kept to a minimum. The show featured the unlikely melding of future pop newcomer Santogold with the tiresome, sunny boy schtick of Jack Johnson, polished roots/jazz chanteuse Norah Jones, commercial country rocker Sheryl Crow and the freakazoid punk hip hop of The Beastie Boys. It was like someone spun a bottle in a corporate boardroom somewhere in Los Angeles.

I came with an open mind, though, even if I expected to feel the vomit rising in my throat during several periods of tonight's extravaganza -- and not just because of the music, but also because I would have to hear hours of celebrities, and pre-shot videos, talking about the importance of voting -- which if you were one of the mostly 20 and 30-somethings in the half-full Coliseum and didn't understand this already, then you deserve to keep getting reamed. Sorry.

I would think most Beastie Boys fans would rebel at suffering the more mainstream Sheryl Crow, and perhaps vice versa -- but the majority of the Richmond crowd was respectful of all the acts and, apart from a few scattered boos when MCA from the Beasties announced he had already voted for Obama, people seemed to be on the same page. I credit this feel-good vibe partly to the enthusiasm of the performers, the general admission floor crowd, the selling of alcohol, and most impressively, the price for tonight's show: Thirty-five bucks for over four hours of big name performers. Not bad. (Still, Obama's own appearance at the packed Coliseum a week earlier felt even more like a rock show).

She's been compared to the global hip hop of M.I.A., but Brooklyn's Santogold kicked things off like a fresh voice on the scene -- mixing elements of dub reggae, hip hop, and ƒ?~80s alternative into her free-flowing set. Flanked by two entertaining back-up singer/dancers and a deejay, Santogold blasted through booming songs from her eclectic, self-titled debut album from this year. It was clear from the start that the sound system was dialed in. You could feel the bass and hear the intricacies of the high end. Soaring above raw dance beats, Santogold put on an inspired set that made me want to check out her album in full, especially after hearing the Diplo-produced song, “Unstoppable,” a relentless track with catchy hooks in all the right places.

Next up was Ravi Shankar's daughter, Nora Jones, looking almost unrecognizable at her piano with short blonde hair. Backed by two women (guitarist Sasha Dobson delivered a great lyrical solo in one song), Jones slowed things down with ballads but kept the emphasis on solid musicianship and her sultry vocals. Something about her smoky, intimate performance style seems to call for more personal venues -- but she still managed to deliver an impressive set, including several Johnny Cash covers as well as version of the sing-a-long Wilco tune, “Jesus,” from “Yankee Hotel Foxtrot.”

I mentally checked out for most of Jack Johnson's set. While I can respect his surfer dude, Hawaiin lifestyle, I've never been impressed by his tepid, “feel me” campfire acoustic songs, with unmemorable vocals that sound like a million other half-assed karaoke singers in Anytown, USA. Girls, of course, went wild for His Hottiness. But when he broke into a cover of Jimmy Buffet's “Mother Ocean,” I had to close my eyes, think happy thoughts, and quickly remove myself to keep my dinner down.

Apart from a plethora of new age platitudes, Crow wasn't as horrible as I expected. Her music still sounded like an endless loop of car commercials, but she did have a natural connection with the crowd and thankfully, kept the songs moving. She also did the most political crooning tonight, and included a barely passable version of The Rolling Stones' “Gimme Shelter” before bringing the other performers (minus the Beasties) onstage for a pathetically soulless rendition of Stevie Wonder's “Higher Ground.”

Fortunately, the concert ended strong with the high-energy antics of The Beastie Boys. Even though they are now in their 40s, they still come across as obnoxious young punks, running three-man weaves around the stage, infusing the best elements of old school hip hop with punk rock attitude. They didn't play their instruments tonight, but relied on the mesmerizing DJ Mix Master Mike to help make older songs sound new by changing up samples and beats and juggling them like a seasoned pro. The crowd was clearly here for The Beasties, throwing their arms in unison for anthems like “No Sleep ƒ?~Till Brooklyn,” and “So What'cha Want?” For their part, the B-boys proved they are still one of the best party bands on the planet -- and they show no signs of age.

Which is exactly what you need before going to the voting booth and realizing, no matter who wins, the country has some major work to do climbing out of the toilet.  S