Everyone deserves a second chance, she once told her mother. But Barbara “Bobbie” Stinnett didn't get one. 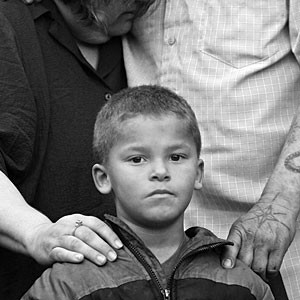 Ramone had a fever of 103. His mother, Barbara “Bobbie” Stinnett, called the pediatrician, who provided instructions on how to bring down his temperature. The fever broke, and so did Stinnett.

This was the first time her son, now 6 years old, had fallen so sick. Stinnett's mother, Virginia Cashwell, says it was also the first time in years she'd seen her normally self-contained daughter moved to tears.

“She said, ‘Please don't let this take my baby,'” Cashwell recalls, watching her grandson roughhouse near a barren tree, adorned with a faded picture of his mother. Minutes before, Cashwell stood on the same spot clutching Ramone while a throng of mourners and police memorialized Stinnett in front of the family's Church Hill house. The picture is one of the few the family has of Stinnett. Arguably the shyest of three siblings, she wasn't one for posing, says her sister, Melissa.

She was a hard person to know, family members say. At 26, Stinnett had divided life into work — 50-plus hours a week managing a Citgo gas station — and raising her son, lovingly referred to as “Duty Man.”

But to those who managed to get close, Stinnett was an “ace,” the kind of nonjudgmental person that would “do anything for you,” says Ramone's godmother, Laangela Bates. That personality trait had long worried her parents. “We would try to tell her that some of the people she hung around with were bad,” says her mother, Cashwell. “But she'd just say, ‘Momma, everybody deserves a second chance.'”

On Feb. 9, Stinnett was found shot behind a Popeye's restaurant on Chamberlayne Avenue in an apparent robbery attempt. Cashwell says Kevin Scott, the 18-year-old man charged by police with her murder, was an acquaintance. Stinnett had just left work, Cashwell says, when Scott called to say he was stranded. He asked her for a ride.

With the reality setting in, Stinnett's parents, sister and younger brother are reluctant to go into further detail. But when police arrived at the scene, they found Stinnett and a male victim shot. An ambulance later transported Stinnett to VCU Medical Center, where she died.

The circumstances are a bitter pill for Stinnett's father, Billy, who still struggles to comprehend the loss weeks after his daughter's death. She was always going out of her way to help someone, he says, including the man accused of killing her.Aÿ

As for the rest of the family, Stinnett's sister, Melissa, says they're coping. It's the family's youngest members — the children of her brother — that are getting them through. “They know, but it hasn't hit them yet,” she says. “It hasn't hit me either.” S