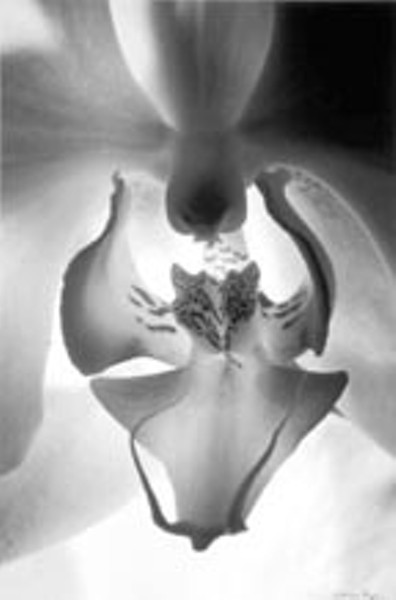 Dye's understated black-and-white photographs document what she calls "the hidden beauty that is all around us." Her carefully framed close-ups of plants allude to other organic forms or seem to reveal miniature landscapes. In "Butterflies," the leaves of a hydrangea bush resemble a swarm of the delicate insects. The tall, curvy flower in "Calla Lily" mimics the female form. These works are most effective when Dye's source is least recognizable. In "Fang," for instance, a mysterious tableau that evokes pelvic bones, the inner ear and a snail's shell is actually a tight shot of a common orchid.

Johnson's subject is the city at night. Or is it? From a distance her tiny color photographs of storefronts bathed in artificial light appear as abstract grids — studies of color and intersecting planes, matted in windowlike rectangles. But a closer look reveals their urban sources. In "Evening Dinner" a kaleidoscopic blur of cool TV blues, shiny fire-engine reds and other unnatural hues becomes, up close, a Berlin nightspot glimpsed through a window. There's a simple pleasure in such discoveries, but it wears thin after decoding more than a dozen scenes. It is unclear to what extent Johnson wants the viewer to contemplate her prosaic images of tacky neon signs or an old man eating a meager fast-food meal. Are they merely random generators of optical information, or are they meant to engage our thoughts and feelings? Johnson's indistinct tone detracts from her formal strengths.

Rachel and Seth Scharon, a married couple who show their work together, create symbolic dreamscapes of layered imagery concerned with (according to their handouts) "cycles of life" and the "quest for knowledge." At their best, these slickly crafted black-and-white photographs offer enthralling but elusive metaphors for archetypal human experiences. In Rachel's "Looking Back," for instance, a country landscape super-imposed over the door of an open shed evokes melancholy nostalgia for a vanishing rural lifestyle. In Seth's stunning "Gateway," female hands appear to open a vertical fissure in a naked woman's belly, revealing a black emptiness inside that could be either the dark safety of the womb or an encounter with the void.

But when the Scharons' unabashedly romantic sensibility backfires, subtlety and invention turn into kitsch. In Rachel's "Origin," a pregnant woman is artlessly superimposed over an idyllic nature scene in a numbingly literal evocation of the earth mother. Such connect-the-dots obviousness also sinks Seth's "Mortality," wherein the empty eye sockets of a crumbling animal skull stare from a black background to remind the viewer of - you guessed it - mortality.

There's something genuinely brave about approaching one's art with such sincerity and so little (intentional) humor. But the sheer proliferation here of tediously vague titles like "Quest," "One" and "Cosmic" suggests that the Scharons would do well to let the universal emerge from the intuitive rather than select a "heavy" topic and contrive an image around it. If they don't, their work is likely to remain as hit-or-miss as these three exhibits. S

Works by Victoria Dye, Catherine Johnson, and Rachel and Seth Scharon can be seen through Aug. 29 at Artspace Gallery at the Plant Zero complex at 0 East Fourth Street.