Straight from the Source 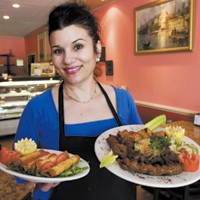 Certain foods are both ubiquitous and seemingly simple, but difficult to get just right. We all have one: a culinary holy grail that keeps us searching for the perfect version, whether it's a chocolate chip cookie, a New York slice, or … hummus. Yes, hummus. An unlikely obsession maybe, but having eaten that creamy combo of chickpeas, tahini, olive oil and lemon juice since it was still considered weird hippie food, hummus and I have a long history together. Istanbul Mediterranean and Turkish Cuisine delivers the real deal.

Yasemin Patton, owner and proprietor of Istanbul, converted the space at 8905 Patterson Ave. from a Mediterranean grocery and deli to a (nearly) full-service, dine-in restaurant in the fall. While a few racks of groceries remain, Patton intends to phase those out soon to make room for more tables. If she can get an ABC license, spruce up the interior and update and diversify her menu a bit, she may just need those extra tables.

At least for now, however, a date-night destination Istanbul is not. On my first visit, a Saturday night, we look forward to a glass of wine, a cozy booth and the much-heralded lamb shish. All we get is the latter. A strip-mall location need not equate to a strip-mall atmosphere inside, but in this case, the wide-open floor plan, bright lights, utilitarian tables and chairs, pink walls and kitschy paintings give the impression of a hastily renovated Subway.

There are two other parties dining in, and both seem to be regulars, chatting with the owner and enjoying hot tea and kebab platters. Patton's attentive service is welcoming, but we can't help but jump ship and take our lamb to go. Note to self: Scout out a new restaurant before making it a Saturday night destination. The tender chunks of lamb shish, however, are devoured in the car.

On my next visit, a weekday lunch, I have the place to myself, aside from one other couple on their way out. I try an assortment of mezze (small plates) and a gyro, and everything is so good I eat myself into Tums territory. The cigar borek (feta-filled phyllo rolls) are hot and crunchy, salty and tangy. I'm no eggplant fan, but manage to polish off the baba ghanouj. My usual complaint with this creamy dip is the bitter aftertaste, but in this case it was sweet and perfectly balanced with tahini and lemon juice, if a tad oily. As I suspected, Patton confirms that she salts the eggplant slices and drains the bitter juices before purAceing with the other ingredients.

The hummus is all I could hope for: smooth, well-garlicked, bright with lemon and a not a bit oily. And the bread — oh, the bread. Warm, soft perfection. I find room for a few bites of gyro and it's hard to put down. There may be no better sandwich than a good pita filled with crispy lamb slices, fresh cacik (the yogurt sauce known as tzatziki in Greek cuisine), and cool, crunchy veggies. The only disappointment is the falafel, which is overly dense and tough, and no comparison to the light, crispy balls of seasoned chickpeas I've had in the past.

We venture back for dinner to see if the entrees can live up to the heavenly lunch. Not quite, but Patton (and her cook) do know lamb. The lamb sautAc and mixed grill are nicely cooked and well-seasoned, but the chicken shish seems to be all dark meat, though the menu describes it as chicken breast. The doner gyro kabob is simply gyro meat served with rice and salad, and, standing alone, is a tad salty. All meaty entrees come with the same two sides — seasoned rice and a shepherd salad of lettuce, tomatoes, cucumbers and onions — which can get a bit boring if you're sharing multiple dishes. We're disappointed with the moussaka, which is oily and under-seasoned, and the thick layer of cheesy bAcchamel overwhelms.

Also disappointing is the lack of any of the seafood offerings, which the menu and Web site have not been updated to reflect.

For dessert, the rice pudding is fine, but the baklava will knock your socks off.

This one-woman operation (plus a cook) still has some kinks to work out, but is a welcome addition to the ethnic dining options in town, and a worthy lunch or take-out destination. S