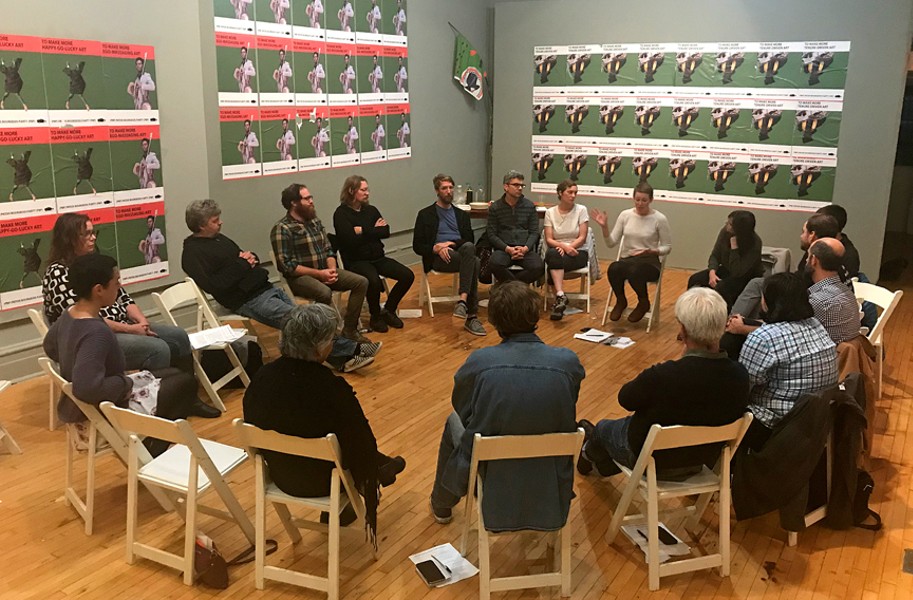 Does this city need a documentary media center?

Richmond native and documentary filmmaker Kate Fowler says absolutely yes, as she gestures energetically with one hand while hoisting her 4-month-old in the other.

"We have to actively ask the question, 'Who do we want to be?'" she says, adding portentously that "we have to tell our own stories, so no one will tell them for us."

Fowler's vision is to open and furnish a street-front collaborative networking hub for local artists that is on the bus line and readily available, open odd hours, providing materials, technology and support for beginning and expert nonfiction filmmakers, podcasters, journalists and educators.

Her business model is her former employer, a highly successful media production space in eastern Kentucky called Appalshop that has been thriving for almost 50 years. According to its website, it presents "stories that commercial media doesn't tell, challenge stereotypes, support grass-roots efforts to achieve justice and equity, and celebrate cultural diversity."

"The people of eastern Kentucky were sick of being portrayed as backwoods hillbillys, so they started their own media outlet to both project a positive message and encourage new artists to tell their stories," Fowler says of the highly successful Appalachian venture.

One innovative way Appalshop is fulfilling its mission is with a two-part radio show called "Hip Hop from the Hilltop" and "Calls from Home," which merges hip-hop music with recorded messages from families to their loved ones who are incarcerated in the numerous state and federal prisons in its listening range. Fowler notes many of those incarcerated, particularly at Red Onion State Prison in Wise County, are from Richmond, Philadelphia and Washington, and their families are still there, so there is no practical way for them to come visit those remote areas. In "Calls from Home," family members get up to five minutes to call in and record family updates that are in turn read on the show and heard by their incarcerated loved ones.

Fowler met with a diverse group of 16 interested filmmakers, educators, artists, students and writers Oct. 27 at 1708 Gallery to gauge the level of interest and the working logistics of a similar artist-run center here. Conversation around the room revealed that attendees' interests in documentary media were based in local crime, genealogy, history, music, family dementia and even the film "Cocaine Cowboys."

Scott Burger admitted that, years ago, "seeing punk-rock documentaries in Norfolk gave me a whole new perspective on documentary film." Educator Jon Sheridan explained that, as a rural student in an urban college, he struggled to find his way. People at the meeting reminded him that he was "from a real place," not to be ashamed and to "slip behind the wall of politics" to tell his stories of farmers and his small-town community.

The center would not just be about film. Documentary media, according to Fowler's model, is any media that creates a nonfictional representation of an event, place or person. Methodologies can include video, photography, journalism, podcasting or any immersive media, such as real-time simulators that place participants in a particular time or place.

The group explored what documentarians would need from such a diverse space. Suggestions included the need for an equipped studio for both people and organizations, intergenerational workshops for novice and emerging professionals, youth workshops, lectures, presentations and other teaching tools. Most importantly, everyone stressed the crucial need for a cohesive central community of like-minded creators, composed of people who nurture a desire to help others tell a story and improve overall media literacy in the non-fictional arts.

Fowler stresses this is just the first step. A second meeting will be held in November at Candela Gallery, and later a third at the Richmond Public Library. Dates will be announced, and everyone is invited. S