Stories Amid the Ruins

Twenty-four elegant and evocative black and white photographs, with richly contrasting tonal qualities and densely layered visual matter, now hang on the not-quite battleship gray walls of the Black Iris Gallery. Upon entering the rectangular exhibition space in the arts district, your eyes move past identically framed images of aircraft on the sidewalls and rest on a single assemblage at the far end. This featured work by Richmond photographer Allen Jones differs from its companion pieces. It is slightly larger, dry mounted and unframed. The photo is also fastened to a large, distressed piece of actual metal fuselage.

What gives this three-dimensional work in “Aero Obsoleta,” an exhibition of junked military aircraft, the pride of place? The title reveals all: “Detail: Eisenhower’s Helicopter, Arizona, 2014.” Jones raises the status of this discarded chopper above the others, despite its isolation at a desert air base near Tucson, Arizona. If the other 23 photos nearby can be considered side chapels lining the nave of a contemplative space, this image is the high altar. It captures the rusting remains of the chopper assigned to the president of the United States.

It’s no surprise that this, and other images on display by one of our region’s best commercial and fine arts photographers, not only honors the designers, engineers, pilots and mechanics who put these now-decaying birds in the air during the Second World War and conflicts in Korea, Vietnam, Kuwait and Afghanistan, but to his father, a former fighter pilot.

On another level however, these images that Jones captured on various excursions in 2014 and 2015 to military aircraft boneyards in Arizona and Ohio, reflect his career-long fascination with landscapes and cityscapes that are in transition. He records man made environments that evoke an unexpected state of grace and beauty with their state of obsolescence and decay. The photographer, a graduate of Thomas Jefferson High School and the Rochester Institute of Technology, told a gallery visitor recently that with changing technological and commercial landscapes have long fascinated him.  Decades ago, he documented the shifting terrain of rural Henrico County as Virginia Center Commons shopping mall took form. He also photographed construction of the James River flood wall as that concrete barrier transformed downtown’s riverfront. He is intrigued by the now-sealed Church Hill tunnel and hikes regularly the pipeline pathway along the James’ north bank near the financial district. 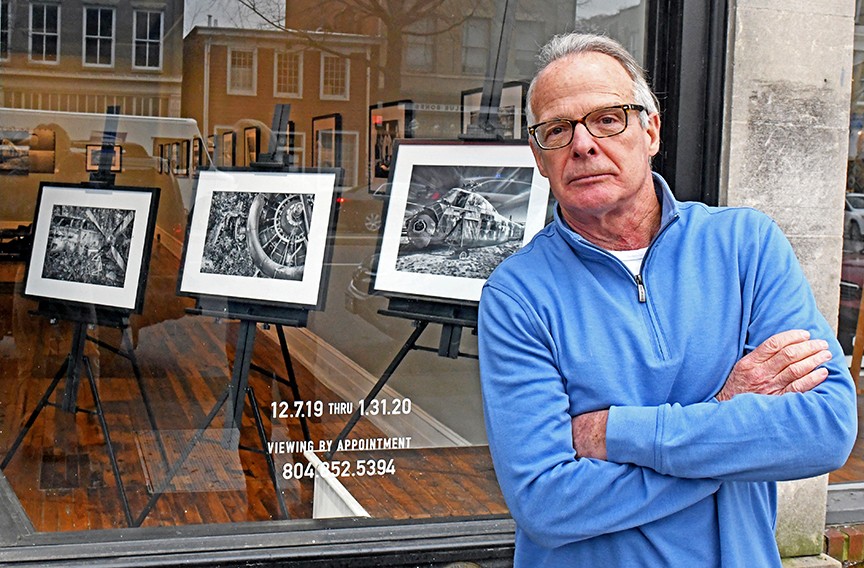 An exhibition of Jones’ photographs depicting the ruins of Richmond, as changing technologies, economies and social values reshape our town, would be timely and welcomed.

But gallerygoers with various interests and expectations will fine much to engage them at “Aero Obsoleta.” First, Jones is a superb designer and frames a picture confidently. Some of his images, despite their obvious historical associations, can be read as abstract. Others are almost goofy and animallike. Consider the shot of rusting aircraft remains in Ohio where the pug-nosed plane snout conjures Snoopy. Or, in “F-105 Thunderchief, Arizona, 2015,” the front of a plane appears to bare sharklike teeth.

For all the assured design, crystalline technical clarity and sociological and technological and environmental overtones, however, Jones’ striking images can also evoke personal associations. One balding gallery goer was overhead to exclaim, as he recognized a site Jones depicted at the Davis-Monthan Air Force Base near Tucson: “I remember in high school we’d crawl with dates through a hole in the chain-link fence and into the cabins of the old fighter planes. But when security guards approached with flashlights, we’d get real still.”

Pausing, before moving on, he muttered: “Can’t do that anymore.”