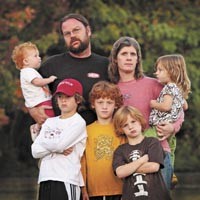 As Chris Vaughan left his Henrico County farm Sept. 22, he thought little of parking his tractor, a green and yellow John Deere 790, out in the open. But when Vaughan returned the next morning, his tractor was gone.

Valued at $17,000 when he purchased it four years ago, the tractor was a vital part of Vaughan's livelihood as a farmer of gourmet sprouts for local restaurants and markets. His Darbytown Road farm has two greenhouses and a garden where he grows 25 varieties of sprouts.

“It's on a busy road with no neighbors,” says Vaughan, who's been farming for 11 years and lives in Forest Hill. “It's not like there's a house next door.”

Without his tractor, Vaughan, 43, will forgo plans to continue planting on his two-acre farm through October, forcing him to make do with what he already has in the ground for next year.

“It's sad. He worked so hard for all these years for this to happen,” says Carlos Silva, the owner and chef of Bistro 27, one of the 25 eateries that Vaughan's Cabbage Hill Farm supplies.

Vaughan doubts the tractor was driven off his property, and theorizes that it was put onto a flatbed truck and driven away. Henrico Police didn't come out to his farm when he reported it stolen, he says, dismayed.

“It's like someone could come and say, ‘They stole my car,’” he says. “If you don't come out, how do you know if they're telling the truth?”

Lt. Doug Perry, a police spokesman, says the department has no active leads on Vaughan's tractor. “It's one of those crimes that's hard to solve,” he says.

Vaughan says his insurance won't cover the theft, and he's still making payments, the last one coming in March. As a full-time farmer with five children to support, he says his options are limited. “I guess I'm going to have to go out and buy a tractor,” he says.