Richmond is finally reinvesting in the riverfront’s shunned stepchild, the Canal Walk. But what will it take to get things moving? 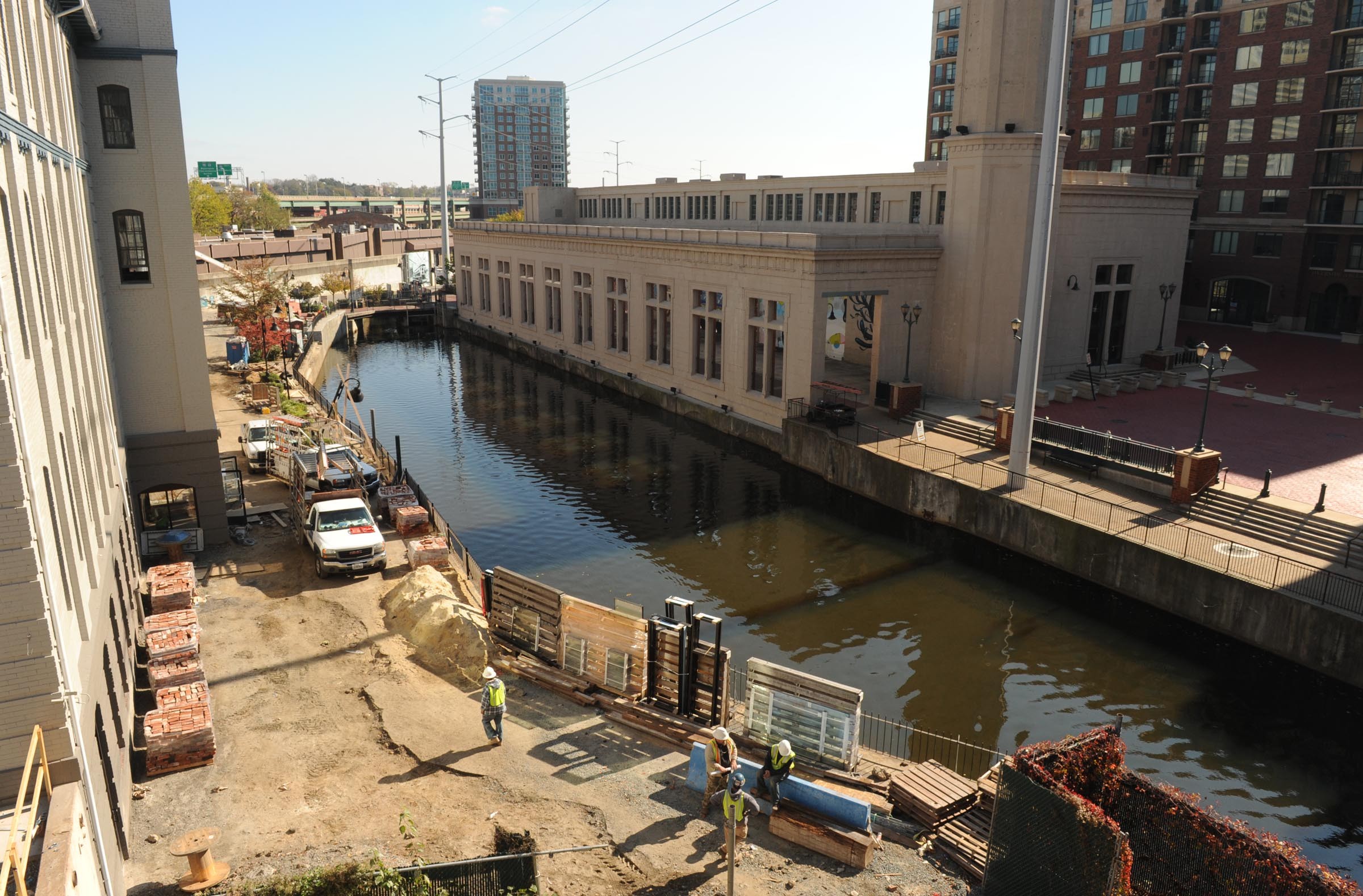 Life on the edge of everything," proclaims a banner hanging above the Canal Walk. It's advertising for the Locks, a five-building redevelopment project between 10th and 12th streets, which promises to bring 174 apartments, a new restaurant — and, after 13 years, life — to the canal.

For now the canal does feel like the edge. A very quiet edge. The $52 million Canal Walk project, completed in 1999, was intended to restore the historic canal network and draw people downtown. But the 1.25-mile walk never became a huge draw. Though people spill onto the walk from popular events on Brown's Island, and 22,000 rode the canal cruise boats this year, there's not much else to attract them.

Now that private developers are close to finishing the Locks on the 6-acre site once owned by Reynolds Metals, the city's about to begin a $1.8 million update of the neighboring section of the Canal Walk. Will it help or hurt?

The city recently put out a request for construction bids to turn the area between 11th and 12th streets into an inviting public plaza, including steps to sit on, new stairs, ramps and lighting. The most notable addition will be a low pedestrian bridge across the canal from the Locks' flagship building, the Italianate. The bridge will be easier to get to than one that rises high overhead. The city also wants to add as many as 30 angled, on-street parking spaces along Byrd Street.
"The feel of the area is wonderful,
with how those old canal buildings are laid out," City Planning Director Mark Olinger says of the area around the Locks. The problem is that people on the north side look across the water and see "an empty plaza, some empty buildings, an old power plant and a flood wall," he says. Not too inviting. Olinger says the goal is to "create more opportunities for people to get to the canal and enjoy the amenity package that's emerging at the canal."

Love the concept, says Richard Souter, executive vice president of the WVS Cos., which is leading the development of the Locks. The problem is the city's timing, he says.

"Even though we have this great plan," Souter says, "it's been extremely frustrating watching this progress." The city has long planned to spruce up that section of the Canal Walk, and improvement money to make it happen became available in July. The request for construction bids didn't go out until last month. Bids are due Nov. 27 and work may begin by the end of the year. This means jackhammers probably will be pounding in the spring, just when the Locks' first tenants have moved in and Casa del Barco, its flagship Mexican restaurant, begins to offer patio dining.

"It's this black hole," Souter says. "Nobody has a real time frame." If the city had a plan and the money, he asks, why didn't it make the Canal Walk a priority — instead of focusing on the Redskins training camp? "There's real economic development potential here," he says. "Very real. Long-term. Residents and businesses. This really should not take that long."

And how long will it take for other tenants to follow, drawn by the life around the Locks?

"We have a way to go," says Brian Glass, senior vice president of retail brokerage with Colliers International. Glass says he recently learned that the residential population of Shockoe, Manchester and downtown doubled from 5,000 in 2000 to 10,000 in 2010. Next year, a slew of new apartments — including those along the canal — should push that to around 14,000.

But according to retail consultant H. Blount Hunter, Glass says, 20,000 people is the magic number needed to make downtown a viable place for retail and restaurants. Tourists, commuters and legislators don't count, he says. "So we're not there yet."

Retail business, including restaurants, is a tough sell along the canal, Glass says. He cites Blackfinn, the pub in the Troutman Sanders building that closed in May. A deal with a new tenant for the 7,000-square-foot space recently fell through. The Turning Basin building, home to Morton's the Steakhouse, was foreclosed on the same month. At Riverside on the James, there's a "huge space" that's never been leased, Glass says — more than 12,000 square feet on the first floor with a river view. And Brad Newman, a representative of the Hat Factory, tells Style Weekly last week that the canal-side nightclub is weighing closing, but won't make any decisions until next year.

One challenge is that "until you get that Canal Walk fully opened," Glass says, "it's only a partial Canal Walk."

From the Turning Basin — the pool at 14th and Canal streets where tour boats bob in warmer months — the experience walking west can only be described as confusing. The walk dives underneath the blocky Reynolds North Packaging Plant, where cobwebbed lights barely illuminate the gloom, and then ascends a set of steep wooden steps. "So it sort of dead-ends the canal," observes James Watkins, deputy executive director at Venture Richmond, which manages the Canal Walk.

That will change. WVS intends to demolish the plant building, although a timetable hasn't been set. Olinger says that the city eventually plans to improve the entire north bank of the canal from Virginia to 10th streets, following the course of private development. This includes fencing, paving, pedestrian and bike trails, at an estimated cost of $12 million. (A year ago, the city got permission from its insurer to allow bikes on the Canal Walk east of 12th Street, Watkins says, but this change hasn't been advertised. Signs will go up soon.)

Souter says the first apartments in the Locks' Italianate building will be leased by the end of the year, to be followed by 60 more in the neighboring Alume in January. He envisions two more restaurants joining Casa del Barco, too, making that section of the Canal Walk a dining destination. "It's going to bring it alive," he says. S