"It’s been 60 years since the Supreme Court outlawed segregation in public schools, but for a lot of students, segregation is still with us." 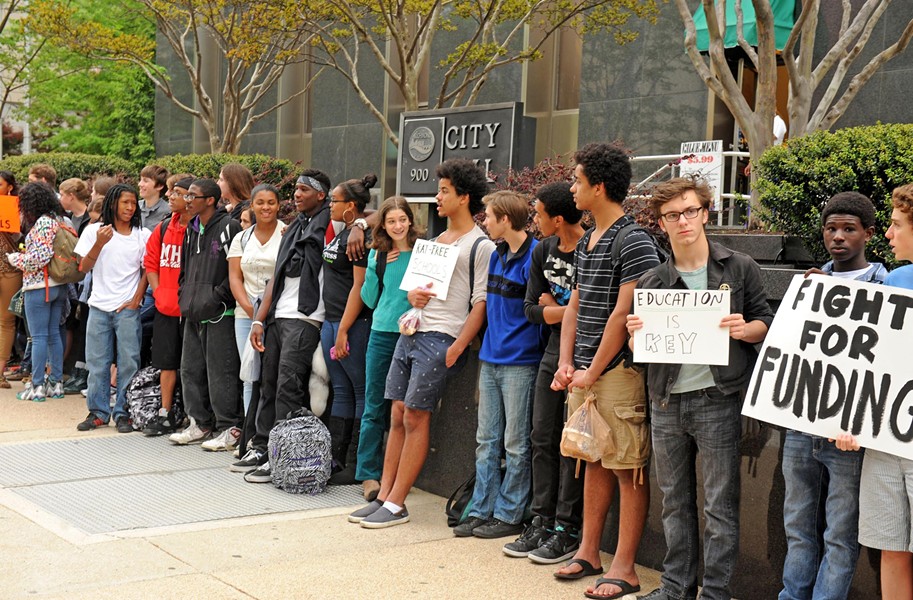 Scott Elmquist About 150 Open High School students protested the rundown conditions of Richmond Public School buildings last month. More perspectives on the impact of Brown v. Board of Education of Topeka at StyleWeekly.com.

I was among the 150 Open High students who walked out of class April 28 to protest the conditions of the public schools in Richmond. In some buildings, roofs leak and there is a problem with rodents and classrooms that smell like mildew and sewage. Most of the students who walked out and marched to City Hall to talk to the mayor were from Open, but a few came from Maggie Walker and other schools. My brother and a few others came from Thomas Jefferson High School.

It was important to me that students do this because if we don't show we care, then no one else will either. No one would put forth the effort. Our school, which is in Oregon Hill, isn't in bad condition, though we could use new bathrooms. Open used to be an elementary school and the stalls and toilets are child-sized. We still have the playground. But we walked out because we wanted to show other schools that this is something we can do. I know some thought that walking out wouldn't help anything, but now I think some understand better that we are fighting for our schools. It's something we can change.

The buildings are only part of that change. At a specialty high school like Open, I have advantages the other students don't. Open has been ranked as one of America's best high schools. It's an individualized school that teaches students responsibility and gives us a family feel. We're more connected to the decisions made about our school. For example, we have a community court where students can work out their differences. At Open, I'm introduced to more diversity and I have more opportunities to branch out. But these opportunities aren't provided to many, maybe even most, public students in Richmond. They go to schools where there is no diversity. Their schools are in neighborhoods that have been left behind, and the students still don't have the opportunities they deserve.

It's been 60 years since the Supreme Court outlawed segregation in public schools, but for a lot of students, segregation is still with us. The Supreme Court said in its 1954 Brown v. Board of Education decision that "separate but equal" was not truly equal. The monumental court decision said that people should accept every race and treat each other equally, yet our country continues to deny entry into our society because of race. America has come far, but what's happening in our schools demonstrates how far America has left to go. Brown v. Board began integrating the school system, but as black children were moving into the schools, the more privileged children of white families moved out, into private schools. As a nation, we moved one step forward and took two steps backward.

I'm a 14-year-old African American girl, and I've seen what happens in our schools. I've seen how kids get stuck in neighborhood schools and in lower academic tracks. Once a student gets assigned to a regular academic track, it becomes much more difficult to move up into accelerated or honors classes, even if those students are high achievers. In programs such as International Baccalaureate, in which I was enrolled at Lucille Brown Middle School, most of the students in the lower accelerated tracks were black and most of the students in top accelerated levels were white.

It isn't always easy to see the reasons. Some of it is self-segregation, and I think that takes us two steps back. Black students may be pressured and teased for being "too white," while white students may be harassed for acting "too black." I know personally how students can be treated as different and how stereotypes can be put upon us.

My white friends stay with their white friends. Black friends with other black friends. Hispanics with other Hispanics. That's who they feel comfortable with. But there is so much to learn from other cultures. Schools are slowly moving towars change but the effort is not always visible. Students are so used to being with others in the same race that there's almost a fear to branch out and meet new people, to interact with other races. The right that was given because of Brown s. Board isn't being acted on. Schools may not be the cause of this, but now schools need to change it.

And I don't know what it will take to bring about changes. I don't know what can be done to make sure every student gets the same chance at an opportunity for a great education. Right now, a lot of white families just put their kids in private school and the majority of black families in the city cannot afford to do that.

Our society has placed the expectation that African-Americans are considered inferior into the minds of children and teens. Brown allowed us to prove equality, but our country still does not fully promote the defeat of the old stereotypes.

Brown v. Board marked a beginning for our country. The case was a first step down a long road toward true equality for all human beings. For our country. Our states. Our cities. The anniversary of this Supreme Court decision reminds us where we've been and where our city and our country can go. We're 60 years into a race to reach for a world of complete equality. S

Mysia Perry is a freshman at Open High School.