A look at some major construction projects that continue to rise around Richmond despite the world setback of COVID-19.

Many folks adjusting to working at home, or anxiously seeking work, are perhaps padding around a little longer than usual in pajamas and bathrobes. But many of those in the construction and landscaping industries, like those in medical, food and grocery service and other critical fields, are up and out early in every part of town.

Like Rip Van Winkle, the 18th-century American in Washington Irving’s short story who awoke after a 20-year slumber — the King George tavern had become the George Washington Inn — when this pandemic lifts those who venture out onto local streets and highways should discover significant progress has been made on major construction projects since the national nightmare began.

Concerned observers have rightly questioned the health risks that those workers in the building trades face by reporting to job sites. But construction has not slowed down. Building contracts are fixed and critical schedules dealing with supply deliveries and pacing subcontractors must be met. There are substantial contractual financial penalties for not completing work on time. And as the coronavirus pandemic deepens, in some communities, building contractors are needed to expand medical facilities or retrofit spaces to care for those affected with the virus.

Edwin Slipek, Style Weekly’s architecture critic, compiled this survey of some of the more visible projects in Richmond where construction is proceeding amid a time of uncertainty like most Americans have never seen in their lifetimes.

In 1910, a seven-story hotel was opened at East Main and North Eighth streets. The architect was German-born Carl Ruehrmund, an architect who emigrated to the United States in 1881. Working for the federal government in Washington, he was sent to Richmond to assist in restoring and expanding the main post office on East Main Street, now a federal courthouse. Currently, Washington developer Douglas Development is reconfiguring the Ruehrmund-designed hotel into 24 one-bedroom apartments with 2,300 square feet of commercial space. Douglas, which converted the former Central National Bank tower here into 200 apartments, currently has an offer on Mayor Levar Stoney’s desk to restore the Richmond Coliseum, revive the Blues Armory, build a convention hotel and carry out other aspects of the recently nixed Navy Hill project. 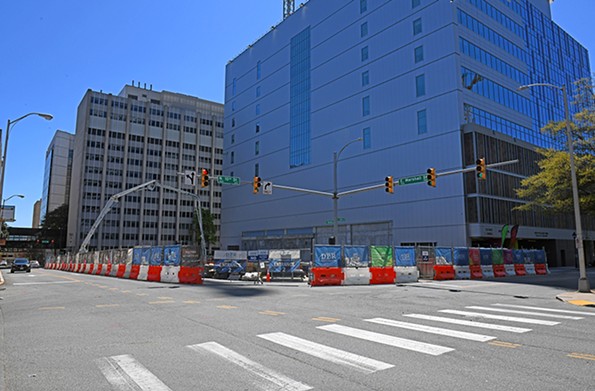 As the VCU Medical Building grows ever taller, it is clear that this will, indeed, be the campus’ largest building, at 603,000 square feet and 16 stories. It will contain many of the health system’s outpatient departments and programs including the Massey Cancer Center.

The leap of the VCU Monroe Park campus eastward across Belvidere Street has resulted in an architecturally iconic neighborhood. Unlike the wildly divergent mix of scale and style in the buildings west of the busy road, the newer engineering and business school facilities, dorms and parking decks share a unified institutional look. Distinguished by bold massing, confident rounded arches and yards of red brick that are relieved with limestone trim, the architectural inspiration probably came from the nearby Commonwealth Club at Franklin and Madison streets. Now, the new Engineering Research Building, at a pivotal crossroads of Belvidere and West Cary streets, creates a savvy hinge that unifies the overall architectural ensemble.

This sleeper, ground-up, mixed-use project is tucked onto a quiet downtown block of East Main. With construction recently started, this six-story building will contain 53 studio, one- and two-bedroom apartments. The street level will offer 21,000 square feet of commercial space and there will be 25 parking spaces. The Goodstein Development Corp. says the project should appeal to young professionals. The recently completed mixed-use complex at 521-525 W. Main St., the Centennial Apartments, involved the adaptive reuse of 104-year old buildings by the same company.

If you could print money, this is what you might get. Members of the Virginia General Assembly are building themselves a Taj Mahal of an office tower, complete with a secure, under-the-street walkways to the Capitol and 500-vehicle parking garage — all the better to stay dry and avoid constituents or protesters on city sidewalks. One grace note in the 426,000-square-foot, 15-story structure is the incorporation into the new structure of a south-facing, 1906 facade of the former Life of Virginia Insurance Co. building, designed by Clinton & Russell, a distinguished New York firm. Sadly, the legislators and clerks saw fit to demolish an adjacent building they had used for many years. This was a 1964 modernist masterpiece by architect Marcellus Wright & Son. In 1982, Virginia architectural historian Robert P. Winthrop called it “one of the most sensitively designed high rises in the city.”  The $300-million construction budget includes restoration of the Old City Hall next door.

St. John’s United Church of Christ, which fronts Stuart Circle, like many urban congregations, is challenged with maintaining its handsome but aging landmark buildings. Fortunately, St. John’s owned the adjacent parking lot at Lombardy and West Grace streets. This is now the site of a 106-unit apartment complex with five residential floors and two parking levels, one below ground. Forty spaces are designated for church use. Brace for tons of red brick in the architectural mix. This is a nod to the plethora of 100-year-old and mostly masonry residences nearby.

Residents of Manchester, Springhill and Woodland Heights had hoped a grocery store would occupy the site where 300,000 square feet of old warehouses once stood along Semmes Avenue near Cowardin. But the tobacco barns have been mostly cleared and replaced by a street grid upon which 106 two-story town homes are being built. Once completed, motorists can expect bottlenecks near the intersection of Semmes and West 22nd streets since just one roadway at that location will serve the 4-acre, densely built residential development. 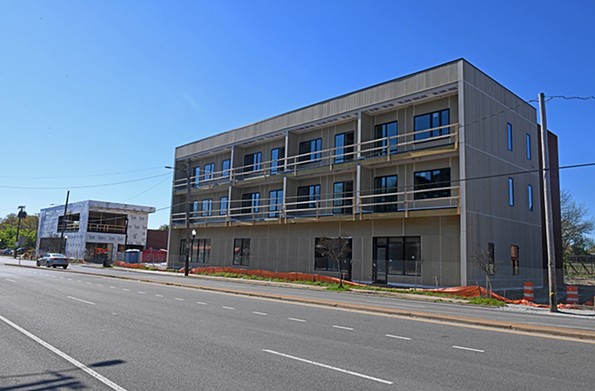 It’s jarring, but pleasantly so, to see a commercial stretch of suburban Forest Hill Avenue being transformed with a building designed to serve pedestrians. The three-story, mixed-use structure that’s currently rising tight against the city sidewalk will have 12,000 square feet of commercial space. Veil Brewery, Charm School ice cream and Blanchards Coffee Roasting Co. are expected to be tenants. There will be 38 apartments upstairs.

Fast-developing lower Hull Street can expect a welcome wallop of architectural panache when the Current is completed later this year. The mixed use, two building complex is designed by Hickok Cole, a Washington-based firm that designs understated, elegant buildings. The red brick, five-story apartment building at Hull and Fourth streets will have 215 units above 19,000 square feet of commercial space at street level. A companion, glassified, six-floor structure at Hull and Fifth streets will offer 70,000 square feet of office space. The two structures will bookend a 4,400-square-foot public courtyard that will extend into the block. A 323-space parking garage at the rear of the complex will front Decatur Street.

Several above-the-store apartment units are ready to rent, and the grounds are mostly landscaped at the fast-evolving, 18-acre City View complex between Hull and Bainbridge streets near West Sixth. There is certain gracefulness to the facades of the trio of new three-story buildings fronting Hull Street. These masterfully combine glass with solid wall materials in deep earth tones, and pleasing, cantilevered overhangs. Construction continues on 161-apartment complex and 13,300 square feet of retail space.

This 14-story apartment tower went up fast, thanks to the use of pre-cast concrete exterior panels. It is the first of two planned buildings designed to sit tight on 3.74 acres along the James River flood wall at the south end of the Mayo Bridge. This phase will have 256 apartments and some commercial space at ground level. Chief among the complex’s amenities will be an outdoor swimming pool and choice views of the raging river and the downtown skyline.

“Independence through interdependence,” is how communities sponsored by the Missouri-based Foundation for Intentional Living, have been described. Richmond Co-Housing will be the first such development sponsored by the not-for-profit in this part of Virginia when it opens this spring in Manchester. Single people, couples and families of various generations, interests, and economic and ethnic backgrounds will share an extended household. The 19 condos under one roof range in size from one to three bedrooms. Each has a kitchen, but there is also a large communal kitchen, a shared play area for children and a roof deck overlooking downtown. Units range cost $140,000 to $400,000.

There was much excitement when the Richmond School Board renamed George Mason Elementary School on Feb. 18 for one of its alumni, Henry L. Marsh III. The Richmond lawyer and former City Council member served as the city’s first African American mayor and later as a state senator. Mason was the author of the Virginia Declaration of Rights, which served as the model for the U.S. Bill of Rights and was a wealthy planter who owned 100 slaves.

At the same meeting, the School Board renamed E.S. H. Greene Elementary as Cardinal Elementary School and selected River City Middle School as the replacement for Elkhardt-Thompson Middle School. The new names will go into effect when three newly built schools open in the fall. Construction is coming along on each of the buildings. Plans for the newly named Marsh project ran into a roadblock when the city’s Commission of Architectural Review denied a request to demolish the oldest section of the architecturally distinguished, nearly 100-year-old George Mason structure.

A bigger headache affecting all three of the new schools might involve refinancing building costs. Budgets were predicated on funding from a 7.5% meals tax imposed on Richmond restaurants in 2018 to generate $9.1 annually million and enable borrowing of $150 million. Many restaurants are closed, and those open for takeout are doing a fraction of their capacity. Some will not reopen.

Located near Pulse bus stations, the Summit at Scott’s Addition will have 166 apartments on five floors above a ground level with 8,500 square feet of commercial space. There will be 198 parking spaces.

Scott’s Addition, the city’s poster child for urban chic with eateries, apartments, advertising agencies, architecture firms, coffee houses and antique shops, is also known for its ubiquitous, low-slung red brick warehouses. But the horizon line is rising with construction of higher buildings such as the Nest. This sprawling, six-story building will have 118 units.