The $30 million jump in construction estimates for three Richmond schools exposes more of a divide than money. 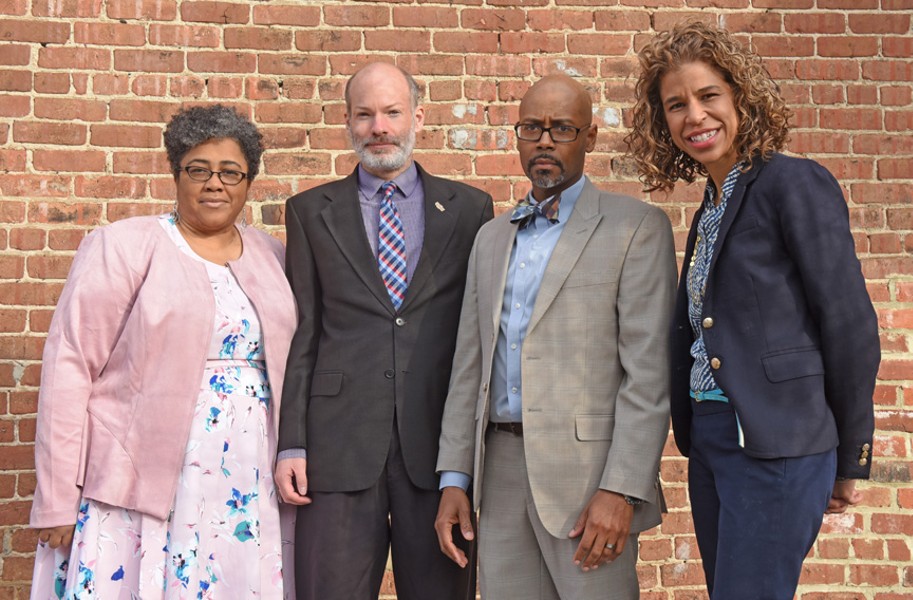 Scott Elmquist School Board members Felicia Cosby, Jonathan Young, Patrick Sapini and Kenya Gibson sent a letter to the city seeking details of a $30 million increase in construction cost estimates for three new schools — and wonder why they didn’t find out sooner.

When School Board member Jonathan Young first learned of the new price tag for three schools the district is building, he says he was amazed.

"The moment that I heard about a $30 million increase in what we're going to spend," he recalls — "I said stop the press."

The Richmond Free Press, more precisely, is how several members of the Richmond School Board discovered in March that construction estimates for one middle and two elementary schools had jumped from $110 million to $140 million.

The news didn't come from a meeting, an email to members, a news release from the city or a memo from the city's chief administrative officer. The cost breakdowns weren't available on the city website.

The amounts also didn't come from the Education Compact, a group organized by Mayor Levar Stoney to build collaboration on academic issues among the mayor, City Council and School Board.

Nor did the costs come from the Joint Construction Team — a committee of city and schools representatives charged with overseeing construction. Minutes from 22 meetings the committee has held since July 5 include no construction estimates.

"All this information should have been out there a long time ago," City Councilwoman Kristen Larson says. "If you're a member of the public, the biggest avenue to get this information is through the newspaper."

Which is why an increase of 27 percent in cost estimates for new schools came as such a surprise and set off a scramble last week.

"Not throwing any shade," City Councilman Michael Jones tweeted about the board members' letter, "but what are y'all discussing in your meetings? This is not Council-Mayor form of government. The superintendent reports to and works for the School Board."

"I like Mike a lot," Young says, "and his observation is astute. It's very astute."

"I'm a little frustrated with our communication around these issues," School Board member Scott Barlow says. "I think communication clearly needs to improve."

The process wasn't supposed to work this way.

Stoney championed an increase to the meals tax of 1.5 percent that City Council approved in February 2018. The goal was to increase a revenue stream to the city against which it could borrow $150 million to build a few new schools.

Citing transparency and fiscal management — and to avoid previous problems with school construction — City Council passed a resolution May 29 seeking a five-year plan on what schools were going to build with the meals tax, quarterly updates and publicly available reports posted online.

"None of that has happened," Larson says.

Plans got underway to build three of five new schools that the Richmond School Board deemed priorities. The city of Richmond issued a request for proposals in May to build George Mason and E.S.H. Green elementary schools and a middle school to replace Elkhardt-Thompson in May.

The most recent construction estimates were $110 million from November 2017. They were put together by longtime Richmond Public Schools administrator and interim superintendent Tommy Kranz, who now serves as assistant superintendent for operations at the Montgomery County Public Schools.

Proposals were due in June for what the city referred to as an "aggressive timeline to complete construction" by the fall of 2020 — a tight turnaround that typically comes with higher costs.

The mayor held a groundbreaking at each of the three school sites Dec. 19.

Around that time, Style made inquiries about how much the three schools would cost, and to what other projects the remainder of the $150 million would go toward. As of Dec. 13, the school system said it could provide no answers.

The new $140 million figure came to light last month, in a response from the Richmond Public Schools to City Council, which asked for an update on construction costs while it reviewed the mayor's proposed budget for fiscal year 2020.

The Free Press picked up the news in a March 22 article. Taken aback, the four members of the School Board sent their letter five days later, asking how the construction costs could be so out of line with initial estimates — and what other localities spend.

The release blamed initial estimates as off, and cited inflation and a requirement that the buildings be LEED Silver certified, an environmental designation, as an added cost.

In his email newsletter, Richmond School Superintendent Jason Kamras says he's "furious" about the situation. Initial estimates were "just wrong," he told The Richmond Times-Dispatch: "We started with bad numbers and now we have real numbers."

Kranz takes exception to the characterization of his estimates, saying a wide array of variables, including cost increases, square footage, construction timetables and other factors, cause changes to estimates.

"That doesn't make the estimates wrong," he says. "That's the part that has got me frustrated with the statement that, basically, the administration has called me out and said the number's not right."

In the end, estimates will be refined and a hard number determined. "I think honestly they're doing it correctly" Kranz says. "But I wish that they would understand and communicate it, instead of trying to say, blame the prior numbers."

Richmond officials say teamwork, trust and communication with each other and the public, are recurring points of concern.

It's unclear why the five other members of the School Board didn't sign the letter, but it seems to illustrate the different approaches to governance that may be aligning in different ways on the board.

Board member Liz Doerr, answering questions from Style emailed to the board, says she wasn't asked whether she wanted to sign the letter.

"I would never spring something like this on my colleagues," she wrote, "and I'm very disappointed that they did not ask for my input here. We need the whole board to be a team if we are going to be successful."

An elementary school in Fairfax County, with a contract awarded in January, is being built at a cost of $27 million for 750 students – at $256 per square foot.

Other issues with costs can be traced to the lack of a comprehensive facilities plan for schools, with consolidation put off and lack of consistent sizes for each school.

Another idea has been for the schools to hire someone to handle construction, rather than splitting the work with the city. In the resolution it passed in May, City Council favored the idea that Larson put forth, to increase efficiencies and effectiveness with schools as the end user of their buildings.

"My thought was, have the schools build the schools like almost every other school division does," Larson says.

In the meantime, she says, the $140 million figure needs clarification. "At the end of the day," she says, "we're doing less construction because these costs are high."