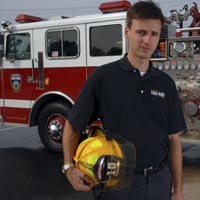 Every day Steven DeLuca lives out the dream he had at 5 years old: He gets to drive a big truck. As a bonus, he helps save lives -- that is, when he's not at his day job.

After a full day of handling state politicians as a frontman for Capital One, DeLuca eats dinner and heads to Hanover County's Fire Station No. 10. "I don't sleep much," he says. "My fiancee [Kristin Walinski, a 2004 Top 40 winner] tolerates it. She's equally busy. She knows I'm helping the community."

A native of Long Island, N.Y., DeLuca is also on the board of directors for North Richmond YMCA, helping raise money for youth in the community who may have no place to go.

He puts in night and weekend time at the fire station for a "smile on the face," he says — and, of course, that truck. He also spearheaded efforts that helped rally support for Station No. 10's win the 2007 firedog Across America contest, recognizing how stations help their communities. The station received a $142,000 donation from Circuit City.

Up next, more dreams: A fire truck will soon carry him and his bride away at their spring wedding.