Steady as She Goes

Scott Elmquist Owner Marty Key stands inside Steady Sounds at 322 W. Broad St. on Friday, May 22. Key will be closing the Richmond favorite next month (not because of COVID-19) and moving out of state. This will not affect Blue Bones Vintage, which shares the space.

Next month, Richmond’s neighborhood record shop Steady Sounds, following 10 years in business, will bid the city farewell. While the city has long been spoiled for record stores, the loss of Steady Sounds is a tremendous one.

As tempting as it might be to attribute the end of Steady Sounds to the recent COVID-19 pandemic, or to the encroachment of streaming culture and the slow death of physical media – streaming made up 80% of music business revenue in 2019 – according to owner Marty Key, the reasons for the closure are more personal than economic.

“It’s a lifestyle change,” says Key, who will be relocating with his wife Nicole out of state following the store’s closing. “The record biz is always in a state of flux but, to be honest, the last year has been really great for us.”

Steady Sounds opened in 2010 after Key learned the ropes of the record business while working as an employee of Richmond’s own Plan 9, and later at New York’s hip Academy Records.

“I learned so much from each shop,” Key says of his days at Plan 9 and Academy. “The best thing was getting to learn about music and records very organically from the employees and customers. I don’t think there is anything that will prepare you for the onslaught that music fanatics will throw at you.”

“I’d been doing this for so long, opening a shop of my own was the next logical step,” he recounts. “When Drew asked me to join in on opening a shop with him when he learned that I was moving back to Richmond, I jumped at the opportunity.”

Snyder left the business in 2015, but Key persisted, expanding his inventory to include new and used stereo equipment and supplies. In 2015, Steady Sounds partnered with the popular Blue Bones Vintage clothing store, which soon occupied half of the property and brought with it new clientele and fresh energy.

Though Key’s love affair with music began early, it was his frequent visits to local record stores while attending Virginia Commonwealth University that cemented his wide-ranging tastes.

“I would ride my bike after class at VCU almost every day to see what they put out used,” he says. “I was primarily looking for punk and hardcore, but delved deep into hip-hop, soul and jazz when the employees would be playing it in the shop.”

“People look at record store employees as either snobs or gods,” he admits. “Going to record stores in my teens, I looked up to the people in stores and thought they knew everything: I thought that they were the coolest people on the planet. Little did I know that they were burnouts who make minimum wage. But still, they knew a lot about music, and I wanted to as well.”

Anyone who has ever had a conversation with Key about rare Dischord singles, collectable jazz labels or '90s hip-hop can attest that he is just as much an expert in his field as any of his childhood record store idols. There are record nerds and there are record jedis. Key is of the latter category, one of those elite few who can determine from across the room not only the specific pressing of the Brazilian jazz record in your hands, but the personnel and where it might rate in the group’s discography. 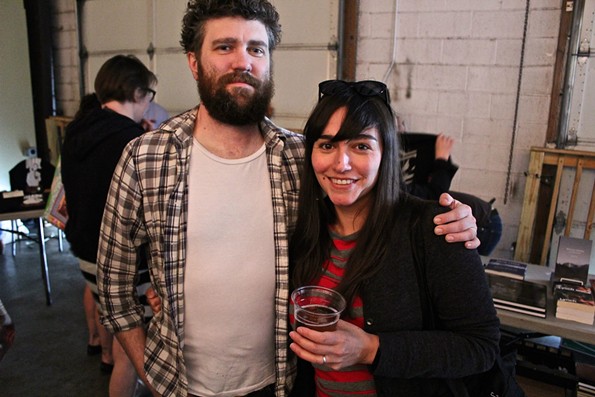 I have also observed firsthand that the meticulous and always professional man known to friends as "Marty Violence" is remarkably well-versed about a great deal of music he doesn’t even particularly like, making him the ideal record store clerk. Whether it’s a touring superstar DJ stopping in to browse the stacks, or a zoomer buying a first Lana Del Rey LP, Marty Key is justifiably beloved by his many loyal customers. Even local pets are known to frequently stop in for an always-at-the-ready Milk Bone or two.

Working constantly between touring – Key plays bass with Ted Leo & the Pharmacists – DJ gigs, concert promotion at Steady Sounds and other venues, and day trips to appraise and buy record collections and attend conventions, Key’s stock is as well curated as it is bargain priced. A common sight at Steady Sounds is a wide-eyed customer bringing a record to the counter, panting excitedly about how that record would have cost four times as much anywhere else.

I admit to a certain amount of bias – I worked at Steady Sounds for two years, alongside fellow employees F.G. Rockwell and Brian Markham – but no one who has ever shopped there would dispute that the shop has long been the utopian ideal of what a modern record store could and should be: inclusive, diverse and community-based, reflective of the vibrant Jackson Ward neighborhood it serves. The store, to me, never reflected the elitist and smug “High Fidelity” stereotype. Rather, Steady Sounds always felt more like “Cheers” with Marty the constantly LP-sleeving, record-player-pricing Sam Malone around which regular, often very colorful characters, orbited.

Though he doesn’t rule out opening another record store in the future and plans to continue selling at record shows, Marty is, for the time being, planning to take it one day at a time.

So what will this local legend do with all his new free time?

“Hopefully start playing more live music, walk the dog and make dinner for my wife,” he says, humble as ever.