The idea won't go away to shoehorn a baseball stadium into Shockoe Bottom, the most ancient of Richmond's many old neighborhoods, and to surround it with a clunky array of retail, hotel, residential and office structures that, combined with traffic, would overwhelm if not destroy this historically rich and architecturally fragile area.

From people not so enamored of the controversial proposal, the question pops up again and again: What's wrong with a ballpark where it is, on the Boulevard?

Which is why it was exciting when Rebkee Co., a Midlothian-based development company, unveiled schematics for a well-conceived and intelligently designed alternative plan for the Boulevard last week.

A 9.7-acre baseball complex and an adjacent 11.2-acre sports and parking development would include both a replacement for the Arthur Ashe Center sports complex and a 965-space garage with rooftop practice fields. Set at the southern edge of the overall 63.7-acre tract owned by the city and Richmond Metropolitan Authority, it would be efficiently wedged against train tracks and the Boulevard, leaving significant acreage for future mixed-use redevelopment. The new stadium and its complements would be situated directly across a realigned Avenue of Champions from the current Sports Backers Stadium. 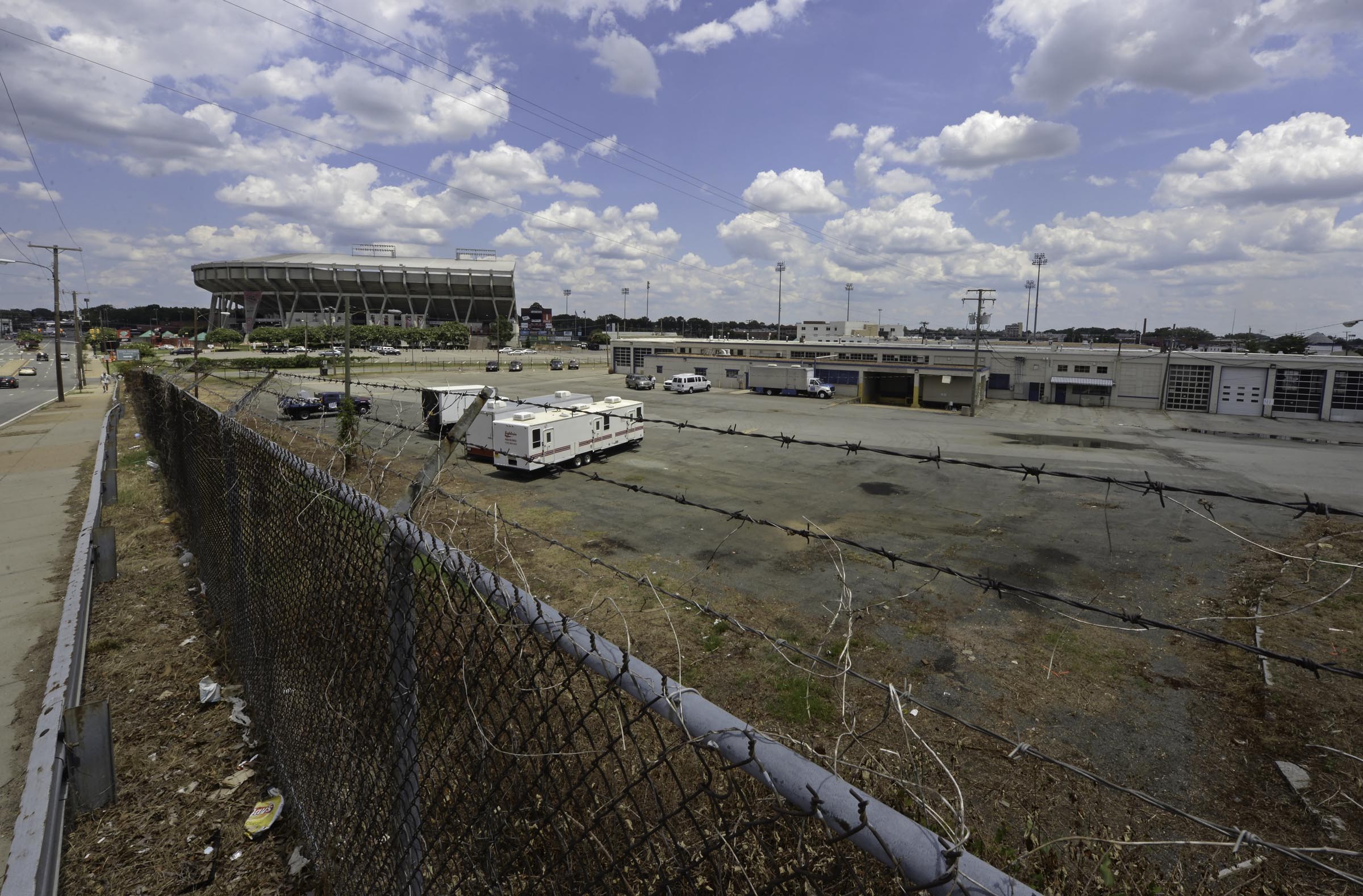 Games could continue at The Diamond during construction and when the new ballpark is completed – patrons wouldn't miss a beat. Minor-league play would go on as it has there for 60 years. Future stars would evolve where such greats as Ted Williams, Mel Stottlemyre and Joe DiMaggio once played.

As rendered by the Richmond architecture firm Baskervill, the new stadium and its seating would be fashioned as a red brick warehouselike structure. This is an obvious design shout-out to the distinctive vernacular industrial architecture of the nearby Scott's Addition and New Town neighborhoods. It would carry the aesthetic of two other complexes across the railroad bridge: the former Interbake building, which is being re-purposed as apartments, and the Movieland cinema complex, which once was a locomotive factory. The ballpark and its accompaniments would add form, substance and considerable life to what's a virtual brown field and a no-man's land, the city's fleet maintenance facility.

As might be expected, there was some quick and negative response from supporters of the Shockoe Bottom ballpark: The plan "doesn't address the [slave] heritage site at all, nor does it address the benefits of funding for our schools, jobs and taxes," a City Council member told The Richmond Times-Dispatch.

Please. That statement speaks volumes about why the proposed scheme for Shockoe has gotten little traction. The convoluted plan is as tangled and mushy as a plate of day-old spaghetti. And defending it with feel-good rationalizations about how it will enhance the interpretation of the horrific story of slave trading in the area and generate tax and tourism dollars isn't just out of touch with reality. It's a boondoggle in the making. It's insulting to our history.

The preliminary scheme and architectural sketches presented thus far by Rebkee straighten out the tangles. It keeps the stadium on the Boulevard where the city already owns land, where baseball is a proven winner and a grand local tradition.

Another thing: Is The Diamond really in deplorable condition? Or was that draconian drumbeat just a ploy by advocates of a stadium in the Bottom? Let's take a moment to recognize this skeletal concrete structure as handsome and iconic in its own right. As Emma Fuller, a New York-based architect and Richmond native has pointed out in recent research, The Diamond's structure was inspired by Pier Luigi Nervi, the great 20th-century Italian architect and engineer who designed the handsome Norfolk Scope and numerous sports complexes in Europe.

As for developing Shockoe Bottom, let's not be swept up with the disingenuous moaning and groaning about the deplorable condition of the proposed redevelopment site. It's been allowed and maybe encouraged to deteriorate for more than a decade since a stadium was proposed for the area. Every block beyond the designated area is seeing dramatic rehabilitation, new construction and repopulation. A grocery store, hotel, office building and additional apartments, if properly designed, are appropriate and welcome in Shockoe Bottom. But let's not allow a generic and diminutive minor-league ballpark to determine the land use of this most historic district. Let the compelling and often tragic history of Shockoe Bottom be researched, unearthed and told without the warm-weather intrastructural albatross of a ballpark.

If, as it's been argued, a stadium is such a great idea for the revitalization of Shockoe Bottom, why isn't the same true for developing the Boulevard? By allowing the architecturally handsome Rebkee plan – or something similar – to update a long-cherished baseball tradition on the Boulevard, this frees up the Bottom for the discovery and narration of quite different and compelling stories of what Richmond has experienced. S