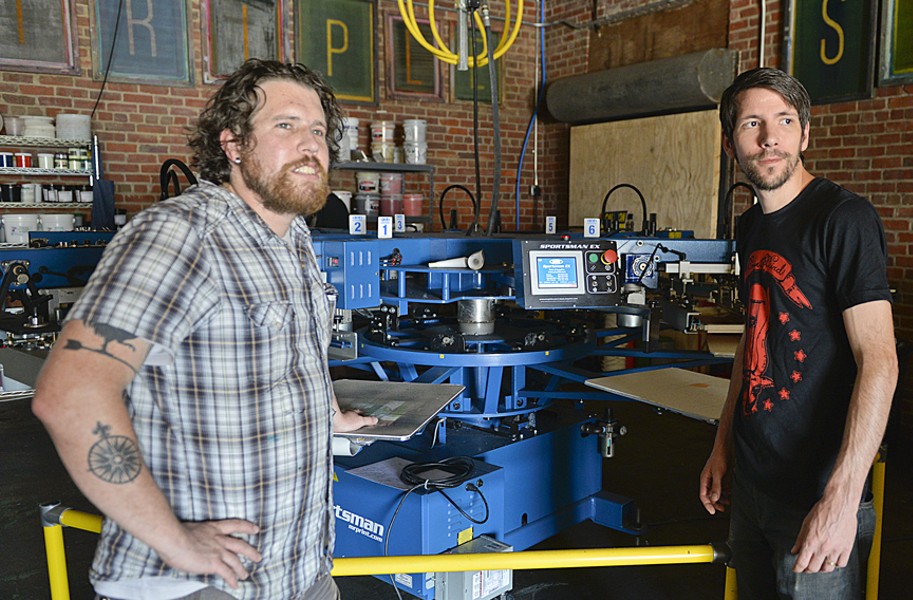 Maybe the next band T-shirt or event poster you buy should promote more than a band. For local musicians Jonathan Vassar and Wil Loyal, the idea is to promote Mother Nature, too.

They started with that mission in 2010, screen printing out of Loyal's basement. Their custom shop, Triple Stamp Press, now specializes in water-based custom printing services on apparel, event posters and packaging. All products are created with a clean and green focus.

The philosophy seems to be working. The shop has moved from that basement to a 2,000-square-foot space in Manchester.

Most screen-printing companies use plastisol-based inks, which are made of the same chemicals used to make PVC piping. "They're not biodegradable," Loyal says. "They require harsh chemicals to clean up and can leech into our bodies."

Environmentally damaging chemicals such as lead, PVC, heavy metals and azo compounds were the very things Triple Stamp Press wanted to avoid. The water-based inks it works with allow the company to use natural enzymes, citrus and soy bases to clean screens and equipment. "We wanted to not only promote a healthy product for people but also a healthy work environment for us," Vassar says. "We want to be around too."

Showing off a few custom-printed shirts, Loyal says that water-based inks are known for their vibrant color and soft feel. On custom-printed apparel, they produce a breathable print that won't crack or peel because they're dyed directly into the fabric.

"We're not covering the shirt with a heavy ink," Loyal says. "It's a transparent ink that actually changes the fabric to a new color so it won't crack or tear. It can stretch easily. There's no feel of ink on the shirt."

Even though the shop's printing methods aren't as common as other commercial printing, Loyal stresses, that doesn't mean the buyer must pay more.

"People assume that if something's eco-friendly it's expensive or it doesn't work," he says, adding that the company's prices are competitive.

The company averages 50 to 75 orders a month, ranging from 25 to 10,000 pieces — all without a sales force. Vassar and Loyal say most of the business is through word of mouth.

"The best example is when we were starting the business and a band in Lynchburg ordered shirts from us," Loyal says. "They played at Rivermont Pizza and the workers there liked the shirts so much that they ordered some for their business. Then someone from a nearby church ate at the pizza place and ordered shirts for their church a couple of times. If you put out a good product, people will walk around wearing it and promote your business."

Community education is an important part of Triple Stamp, and it will offer screen-printing classes this summer at Studio Two Three, Vassar says: "We love to 'talk shop' with other printers or people just interested in screen-printing." S