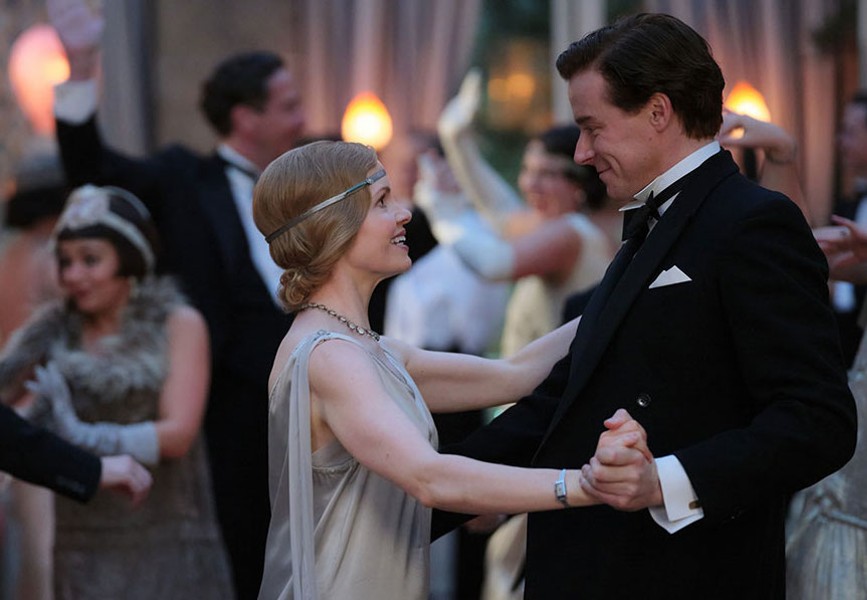 Beginning in 1988 with “Distant Voices, Still Lives,” British filmmaker Terence Davies has fashioned a remarkable body of work that suggests a reckoning with the legacy of his country and his place within it. Davies’ blend of fiction and documentary forms serves as a truly modern refute of the static three-act structure that drives most movies.

Davies doesn’t do “and then this happened,” piling scenes atop one another in chronological and psychologically pat order until a hero reaches a preordained catharsis. In his cinema, all of time exists simultaneously as an unmooring slipstream. Next to “A Quiet Passion,” his 2017 film about the American poet Emily Dickinson, and “Benediction,” his new film about the British war poet Siegfried Sassoon, most biopics resemble weak tea.

The opening scene of “Benediction” establishes its formal audacity. It’s London of 1914, and Sassoon (played as a young man by Jack Lowden) is at a theater seeing the Diaghilev ballet set to Stravinsky’s “The Rite of Spring.” As voiceover, we hear Sassoon reading the poem that this night would inspire, “Concert-Interpretation,” and the theater curtains draw to reveal not a show but stock footage of the First World War.

In one scene, Davies merges with a master’s ease a vision of the past with future retrospection as well as the brutal realities of war with the privileges of the elite, which all merge to establish how multiple experiences coalesce and linger to form a state of mind and an artistic sensibility. All accomplished via daringly merged audio and images that feel free-associational as well as fiercely concentrated. One can easily imagine how an ordinary director would set all of this up with a few characters sitting in a drawing room, talking of the war over puffs of pipe smoke and sips of brandy.

Sassoon served in the First World War and it would haunt him throughout his life. He spent nearly three years in the trenches before becoming a conscientious objector. Protesting the war, especially as a deserter, was punishable by death. But luckily Sassoon was already an accomplished poet with friends in high places, such as Robbie Ross (Simon Russell Beale), who is able to help get Sassoon classified as unstable and placed in a mental hospital.

Ross’s acts of generosity are against Sassoon’s wishes, as he claims he was willing to face the firing squad to underscore the British aristocracy’s escalating colonialism. Sassoon’s torment over survivor’s guilt and his perception of his political ineffectuality is buffeted by another misery: He is gay, and that lifestyle is illegal in Britain at the time. Davies is also gay, and his own poetry merges intuitively, rhapsodically, with Sassoon’s. “Benediction” is a haunted biography as autobiography.

Sassoon’s poetry is eaten up with ecstatic details that cumulatively convey rich inner and outer worlds, as is Davies’ own. There is a sense in each artist’s poetry of being able to see into the future and discern forthcoming disenchantment, which is an extension of the disenchantment that each already feels in the present day.

Sassoon is divorced from time by his participation in a war, which no one apart from another veteran can truly understand, and from his homosexuality, which social repression renders an open secret that engulfs him in the moneyed society of the London beau monde.

There are brief, startling leaps into the future, in which Sassoon’s agony is confirmed to be unrelieved. Turning to Catholicism late in life, as an act of desperation—Davies is also a lapsed Catholic—Sassoon becomes a bitter man trapped in a marriage of social necessity, lashing out at his (loving) wife and (resentful, yet stalwart) son alike. In old age Sassoon is both stuck and untethered, just as he predicted himself to be, and these ironies ripple across the screen in medium shots that are charged by an exquisite paradox: these compositions are intimate from a distance.

One of the most astonishing flash forwards occurs when one of Sassoon’s lovers, Stephen Tennant (Calum Lynch), is looking in a mirror, ruing the inevitable ruin of his beautiful visage, only to have his face morph into that of the older man he will become decades later. Then the aging Tennant (Anton Lesser) attempts to reconcile with the aging Sassoon (Peter Capaldi), who bitterly, brutally rebuffs him. Then we’re back into the bedroom of the young Tennant, seeing the fight that would beget a decades-later confrontation. As the relationship crumbles, Davies allows each man his own point. We can’t tell who’s at “fault” because we understand that both are tragically blocked, by their respective baggage, from discerning the vulnerability of the other.

Love and profound attraction beggar a vulnerability that we often safeguard against with cruelty. This cruelty courses through “Benediction,” expressed in diamond-sharp barbs and aphorisms as potent and personal as any to be found in, say, “All About Eve.”

The love of Sassoon’s life, however, is the poet Wilfred Owen (Matthew Tennyson), whom he meets while in the hospital. Characteristic of Davies’ perverse, steadfast unconventionality, Owen is barely in the film, as the poets’ moments together are shown to be a quickly fleeting paradise. The speed of the moments embodies their specialness to each man, particularly an erotic swim that Davies reduces to a matter of seconds. Sassoon, sensing this loss, asks Owen to stand by him a moment longer before he must return to war to die, and this pause, suggesting the cinematic equivalent of a stanza, honors the full weight of their love and their agony.

The most achingly romantic scene in the film is when Sassoon, initially blind to Owen’s talent by his own competitiveness and snobbery, confesses that he believes Owen to be the better poet. Yet even this moment is tarnished by the self-loathing that blemishes much of Sassoon’s life.

“Benediction” runs 137 minutes, and a more conventional filmmaker would’ve probably sped it up. Each scene, unburdened by a routine structure, is allowed to breathe its own distinctive oxygen, as Davies invests each inflection of a line, each instance of body language, with vivid materiality.

Everything matters in this movie, to a nearly exhausting degree—there’s no negligible throwaway merely to move the plot along. And Davies’ musical sense might be most tangibly communicated by his fierce command of silences, which embody bonds, dissolutions, dissonances, and moments of epiphany. Davies has made a great movie about how a mind is forged, by society and by itself, and how that mind subsequently forges both a working life and an eventual emotional prison.

The slim, trim, horror-mystery “Watcher” is also concerned with state of mind. Director Chloe Okuno, who rewrote Zack Ford’s script, evokes the sense that women have of being marginalized, objectified, and loathed by the men around them.

Okuno utilizes a beautifully simple conceit: the cultural confusion that springs from a young woman’s trip to her husband’s home country stands in for the widening gap between them, which subsequently represents the gulf between men and women at large. Barring the international angle, this sort of thing has been done before, particularly by Roman Polanski in “Repulsion” and “Rosemary’s Baby.” But Polanski’s a dude, and one who evaded the persecution of a very famous sex crime. He’s among the most brilliant of all filmmakers, but it’s fair, to put it lightly, to get a woman’s treatment on the subject of female marginalization.

Refreshingly for a modern, politically-minded horror filmmaker, Okuno trusts us to sort out most of the film’s social resonances for ourselves, understanding the obvious, primordial power of her scenario. Julia (Maika Monroe) is a young, beautiful American woman recently relocated to Bucharest with her half-native husband, Francis (Karl Glusman). Not long after settling into the new place, Julia notices a man looking at her from an apartment across the street, and she suspects she’s being followed by the same man, who may also be a serial killer.

Francis, smug and prone to ridiculing Julia to coworkers, doesn’t believe her, and various other men prove to be disinterested and ineffectual. For better and worse, this thwarted detective work is essentially the whole movie, which suggests the first act of a routine slasher film stretched out to feature length.

Okuno displays muscular filmmaking chops in the sequences in which Julia is followed by a figure into a movie theater and a grocery store, and a scene in a strip club has the lurid dread that’s regrettably missing from much of the remainder of “Watcher.” Okuno’s cinephilia pops up too, in the references to “Rosemary’s Baby,” “Dressed to Kill,” etc. that serve to remind us of the visceral pleasures that she is dead-set against delivering. Okuno is too earnestly empathetic to Julia, as a representation of imperiled womanhood, to put her through the wringer—to make a movie that’s actually dirty and scary.

“Rosemary’s Baby” is animated by a weird pull in sensibilities. Polanski is enough of an artist to empathize with his heroine and enough of an elegant carny jokester to position her ordeal as disconcertingly funny pulp horror. This sense, that the artist offering your nightly art isn’t to be trusted, is terrifying. The same can be said of Brian De Palma in blood thrillers like “Carrie” and “Dressed to Kill.” He loves his heroines, yet is willing to offer them up as sacrificial lambs for the sake of psychologically astute kinetics.

By contrast, Okuno leeches “Watcher” of pulp, leaving you with wan juice, and the film is in desperate need of a curveball. Julia thinks something is happening and that happening happens precisely as she assumed. The end.

It’s respectable, but that’s the problem: “Watcher” is another “good for you” horror film. Here’s hoping more filmmakers soon remember the genre’s wonderful capacity for disreputability.