State of the Keg

A little brewery named Stone has broken ground off Williamsburg Road after much hoopla. And while it's certainly worth celebrating, the most exciting story in the last year lies with the existing local craft breweries and those about to join them.

Richmond's brew roots are firm, strengthening and ever-expanding. We're becoming a bona fide beer city. Heck, even local supermarkets are installing growler fill stations. Richmond has arrived. When Style first started this annual issue, the State of the Keg seemed like an appropriate name to chronicle the scene. This year we launched a special publication, RVA Growler, to tell the stories in between. But soon we might need a bigger barrel. 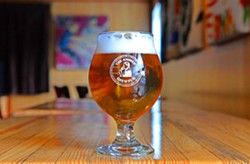 Since the last year, growth has been exponential. Last fall, Mekong's An Bui expanded his empire when he acquired Commercial Taphouse on Robinson Street and then opened the Answer Brewpub — with on-site brewing — after much anticipation. The Answer proved to be well worth the wait, boasting 56 taps, two bars, a stage and, of course, some of the best drinking company in the city. Its first in-house beer, Petty Larceny, was released in April and quickly prompted praise.

"We are continually tweaking everything to produce better beers," head brewer Brandon Tolbert says (see page 16). "So in the future, expect better beers than what has been offered thus far." Color us thrilled.

Some of the city's established breweries are using their wisdom and experience to push taste to the next level. Hardywood Park Craft Brewery announced that it's planning a $28 million expansion in Goochland (page 14). It's also developing a sour program, and reports having a dozen barrels on hand to play with and use for the extensive aging process of a complex sour ale. "The plan right now is to use them for various small batches that may age for as much as a year or more in the barrel," co-owner Patrick Murtaugh says.

Isley Brewing Co. also is getting in on the sour game with two varieties in the works. In addition, it's planning its first bottle release.

The guys over at Triple Crossing Brewing Co. recently launched a gluten-removed version of Element 79 so that folks with mild gluten intolerance (not those who suffer from celiac disease) can enjoy a crafty brew.

"We're also preparing to do a one-off version of Liberty or Death that has Black Hand coffee beans, which we aged green in bourbon barrels for several months," Triple Crossing co-owner Adam Worcester says. "They will then be added to the beer after roasting at Black Hand."

Tony Ammendolia's beloved home-brew store, Original Gravity, will now house a nanobrewery, Final Gravity, with two barrel-batches to start. He says you can expect the beer to be available by mid-August.

Things also are kicking up over at the farm. Lickinghole Creek Craft Brewery is expanding its capacity by 75 percent in the late fall with the addition of new fermentation vessels and Brite tanks. "This will allow us to expand the types of beers we currently offer," owner Sean-Thomas Pumphrey says. "We're also increasing the amount of barley and other fresh ingredients we grow on the farm to use in our Estate Series of beers." 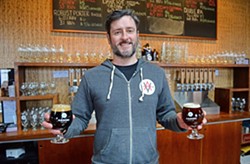 Over at Center of the Universe Brewing Co., co-owner Chris Ray reports on plans to install more equipment in the winter too. The brewery also celebrated its first distribution expansion this year, so folks as far down the road as Virginia Beach can enjoy a little Ray Ray's Pale Ale.

And it isn't only breweries that are getting bigger and badder. Blue Bee Cider outgrew its Manchester digs and recently announced plans to settle in Scott's Addition. The city's first growler store, Growlers to Go, opened on the Boulevard and immediately expanded westward to Short Pump with a second shop.

There have been plenty of parties as of late as well. Ardent Craft Ales celebrated its first anniversary with a big bash, and Legend Brewery is finally legal (at 21 years). In only two years, Strangeways Brewing — which continues to keep Richmond beer deliciously weird — has been deemed best brewery taproom in Virginia by Ratebeer. It'll keep things strange with a Comic Con kickoff July 30, which promises a few celebrity appearances.

And we aren't done yet. There are at least four newbies eager to please your palate, which are set to open before year's end.

Ross Renfrow is confident that 7 Hills in Shockoe Bottom finally will welcome thirsty patrons in August. "We are very close and have finally entered the permit process," he says. "Our system is ready to brew and we are putting the final touches on the pub."

The Veil's brew master Matt Tarpey says plans are on for a November opening in Scott's Addition (page 20). "Nothing is a guarantee," he says, "but our contractor and architect remain confident we will be able to start brewing then."

And across the Boulevard, Castleburg Brewery & Taproom will start brewing near Hardywood on Ownby Lane, while outside the River City, Trapezium, a 30-barrel brew house, will give Petersburg its first craft brewery.

Steam Bell Beer Works and Kindred Spirit Brewing are gearing up in Chesterfield. 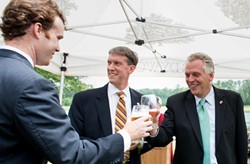 The word "saturation" gets brought up every so often given the all the openings, but there's plenty of room to keep growing, according to Original Gravity's Ammendolia. "I'm one of the people that thinks we are a long way from being saturated," he says.

Murtaugh agrees. "The beauty of the Richmond brewing scene is that everyone seems to be doing their own thing and coming out with unique and wonderful beers wholly independent of one another or popular trend," he says.