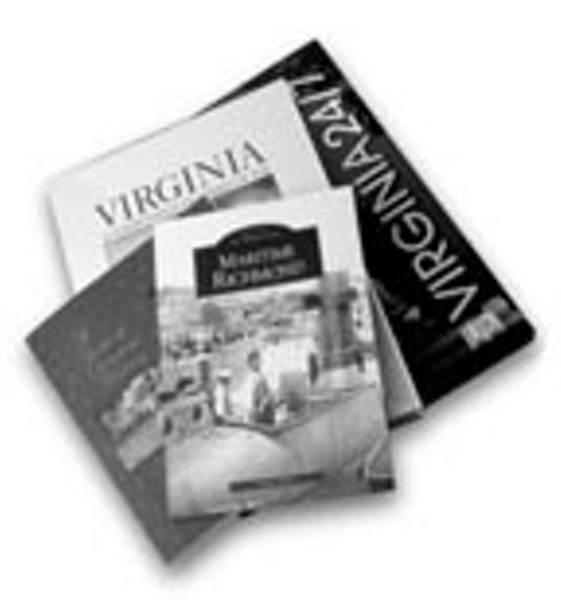 "A Taste of Virginia History: A Guide to Historic Eateries and Their Recipes," by Debbie Nunley and Karen Jane Elliott; John F. Blair, Publisher, 2004. $18.95

The intrepid palates of Nunley and Elliott braved hurricanes and grits in their pursuit of material for their third book of travel and food, following "A Taste of Pennsylvania History" and "A Taste of Ohio History." The pair explored 123 restaurants and inns throughout the state, compiling recipes with a dash of history. Each entry features the tale of the building that houses the eatery, along with a couple of recipes that have made the historic sites places to continue visiting. With the help of the many restaurateurs in Virginia, Nunley and Elliott found storied menus in sites alternately touched by the Civil War, established by great historic figures, or that witnessed the development of the commonwealth. The book ends up telling the story of Virginia as written by the pen, the sword and the fork.

Arcadia Publishing explores the history of America not with sweeping strokes, but through the images and local stories that give history color and flavor. Dale Totty adds to Arcadia's "Images of America" series with a book that explores the rise and fall of its prominence as a port town through the 1800s. With an impressive collection of photos and drawings of the times, Totty details the engineering of the locks and canals that enabled Richmond to become a hub for commerce and established its flour mills as foremost in the nation throughout the first half of that century. Totty's arrangement of the photos beautifully depicts the successes of technology, the self-inflicted destruction of the war, leading to the rise of railways after the war and ending the city's control of the waterways.

Virginia historian Lisa Antonelli Bacon (and Style senior contributing editor) approaches the rise of Virginia with a razor-sharp understanding of its key moments, figures and trends. The book, first published in 1988, focuses on the twin pillars of nature and technology as the supports on which Virginia was founded. The significant personalities of the times move between these pillars, building a society fueled by tobacco and the commerce of rail and river as well as the rebuilding of the pillars after the Civil War. The photos burst off the page in full color in the third quarter of the book, like its own vibrant autumn. The last chapter, added to the new edition, explores the leadership of the modern state.

Smolan and Cohen conceived the "America 24/7" project as a way to capture the many facets of our nation in an eye-blink. The week of May 12-18, 2003, more than 25,000 photographers went out into the cities and countrysides of America to create a document of a nation in motion. "Virginia 24/7" is our little section of that eye-blink and features over 40 Virginia photographers — including Style's own Stephen Salpukas and Scott Elmquist — catching life on the fly. The brilliance of the images, the spectrum of the subjects, the implication of simultaneity: This photo journal goes further in revealing life's sheer presence than most projects. The narrative is spelled out in the color photos dominating the page, with the thread of thumbnails running along the tops of the pages, reminding us that life in Virginia, as in America, is continuous and changing. S