The Conciliation Lab finds a natural fit between theater and activism.

Scott Elmquist Dr. Tawnya Pettiford-Wates, founder of the Conciliation Project, stands with Deejay Gray, artistic director of TheatreLab, inside the Basement, the venue at 300 E. Broad where TheatreLab stages its plays.

Last summer, as the nation faced the two pandemics of the coronavirus and systemic racism, Deejay Gray of TheatreLab and longtime collaborator Tawnya Pettiford-Wates, founder of the Conciliation Project, a nonprofit social justice theater company, began to reconsider the role of theater in America. The virus meant that neither of them was working on planned projects. Gray had converted the Basement, TheatreLab’s performance space, into a space for Black Lives Matter protesters to stop off for a drink of water or a bathroom break before carrying on in the name of racial justice.

“We just kept asking ourselves: What else can a theater company be?” Gray recalls. “What is the role of arts and culture organizations moving forward? What is the responsibility?”

Over the course of many discussions, it became clear that the best way to respond to the current moment was to pool their resources and knowledge, bringing in talent, ideas and expertise from both organizations to form one powerful, unified force of arts and activism organization. The Conciliation Lab was born.

“We feel a major obligation as an organization of these two groups coming together to really stand for something that’s very important,” Gray says. “And to reflect the moment that we are living through.”

All theater companies and arts organizations are currently grappling with this very question, and we have seen them all striving for more diversity onstage and behind the scenes. But in a city with such a vibrant theater scene, and only one black-owned company, the Heritage Ensemble Theatre Company, more direct, intentional and transparent activism is needed.

“We are going back to the roots of what art has always been,” says Pettiford-Wates, known to most as Dr. T. “Art has always been an expression that challenges, that teaches, that interrogates culture, so arts and activism have always been in bed together.”

Dr. T knows what she’s talking about. The Virginia Commonwealth University theater professor has been involved in arts activism for over 20 years, founding the Conciliation Project in 2001 with the goal of addressing systemic racism and oppression through community dialogue and thought-provoking theater.

“We recognized that the problem was that we were trying to move on, that we were trying to create this false narrative of unity when we did not have unity,” Pettiford-Wates explains. “We were doing pageantry and symbology – a performance of unity, when there was no unity.” She wanted to use theater to help people unpack the trauma of systemic racism, theater that might “change policies and procedures, and ultimately hearts and minds.”

“Every single show that we picked was always to ignite some sort of a conversation around a social issue, but we’ve always been kind of sneaky about it,” Gray says. “What we’re doing now as far as production goes is we’re taking it one step further. The Conciliation Lab is going to be more bold about communicating those social issues and being more intentional about having those dialogues and making sure that we are growing with our community.”

The Conciliation Lab has already begun its work in the community, holding virtual town hall meetings, bringing workshops to the Orchard House School and the Richmond Waldorf School, and beginning plans for an upcoming full season announcement.

Richmond audiences can expect to see a roster of shows specifically chosen to address issues of racism and oppression, with each production also featuring some kind of community-engagement initiative. This could look like talk backs after shows, panel or roundtable discussions or community dialogues and activities associated with productions.

“The pillars of the work that we’re going to be doing are story, healing and education, and all of them are intertwined with one another,” Pettiford-Wates says. She adds that the Conciliation Lab is inextricably linked to other arts organizations, both locally and globally, and that collaboration and community partnerships will also be a cornerstone of the new organization. The Richmond theater community welcomes that collaborative spirit. Obadiah Parker, community engagement chair of Virginia Commonwealth University’s Black Theatre Association, says he thinks the merger is “exactly what we should hope for.”

“Collaboration, bringing in new voices, is so important because someone else might have the outlook or the skills needed to make your project better,” Parker says. “That’s how you get better work, and that’s how community is built.”

Through collaboration, the Conciliation Lab can draw on the expertise of others with a long history of community building. Ram Bhagat, founder of the Drums No Guns Foundation, has worked with Pettiford-Wates and the Conciliation Project for nearly a decade, partnering on projects such as Massive Resilience, a series of youth workshops with Art 180 and, more recently, “Common Wealth & Common Debt” at the VCU Institute for Contemporary Art, a digital project that used interviews with the Richmond community and artistic expression to illustrate racial disparities in the city.

“I think the dimensionality of the differences in the experiences of those two sort of broad groups was revealing about how the commonwealth affects different people in different ways,” Bhagat says. While he hopes to continue collaborating on projects like this one, Bhagat says he’s most excited about the innovative way that Conciliation Lab has structured its board.

“I think this is going to appeal to many different age groups, dispositions, areas of interest and focus, passion, and community,” Bhagat explains. “And not just in the Richmond community. The navigation into the virtual space has really opened and expanded to the community globally.”

As a part of their efforts to dismantle white supremacy, the Conciliation Lab’s executive board is structured to ensure that there is never just one person responsible for decision-making. Instead, it’s a 10-person executive group composed of leaders from both founding organizations. Pettiford-Wates and Gray will serve as co-artistic directors with Bhagat and former Style Weekly theater critic David Timberline co-chairing the governance board, which will handle finance and development. Debra Crabbe and Heather Falks will co-chair the arts and activists board, overseeing all productions, programming and outreach. Ashley Davis and Chelsea Burke will co-chair a youth leadership board and Carolyn Sarosi and Jasmine Coles will serve as treasurer and outreach director, respectively.

In addition to ensuring that the decision-making power is spread evenly among these many diverse board members, the board membership includes a rotating term cycle that Gray hopes will help build the legacy of the organization moving forward. He and Pettiford-Wates emphasize the continued importance of community dialogue and radical transparency as the organization develops.

“The community doesn’t have to wonder what we are thinking, or what’s going on behind the scenes. You can come behind the scenes if you want,” Pettiford-Wates says. “We’re decolonizing the table, we’re bringing it out onto the front porch, and that means that no one needs to go around to the back door anymore, everyone’s coming in the front door.”

“Even the terminology, ‘we want to bring you to the table,’ [is problematic],” Gray adds. “We’re not playing the table game because we’re going to decolonize the table and find a structure that works for the community.”

Organizations with marginalized voices in power have always been community centered. As Bhagat explains, “there’s a long tradition and heritage and legacy of the uncolonized table already having all of the tools necessary to do the work, because they’ve been doing it much longer and much more successfully before being colonized.” 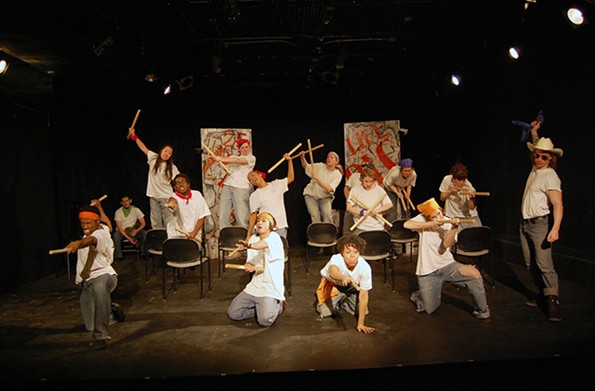 There’s also a long tradition of theater effecting lasting social change through empathy and community building. As Parker points out, theater is an inherently communal art.

“It’s real people watching real people and being vulnerable and enjoying a story together,” Parker says, “and maybe it’s about something they’ve never heard of or maybe it’s told from a perspective they don’t understand yet. But that’s the key to growth. It’s learning and understanding.”

“Some of our country’s most lauded pieces of theater have been activist work,” Pettiford-Wates says, citing Tony Kushner’s “Angels in America” and Ntozake Shange’s “For Colored Girls Who Have Considered Suicide/When the Rainbow Is Enuf” as examples.

“Those pieces transformed audience capacity,” she continues, “and I’m not talking about numbers of people and butts in seats, I’m talking about their ability to see humanity and to embrace humanity. To recognize that difference isn’t demonic, that it’s not destructive, that it’s actually empowering.”

This is the legacy Pettiford-Wates and Gray and the entire executive leadership of the Conciliation Lab hope to carry on.