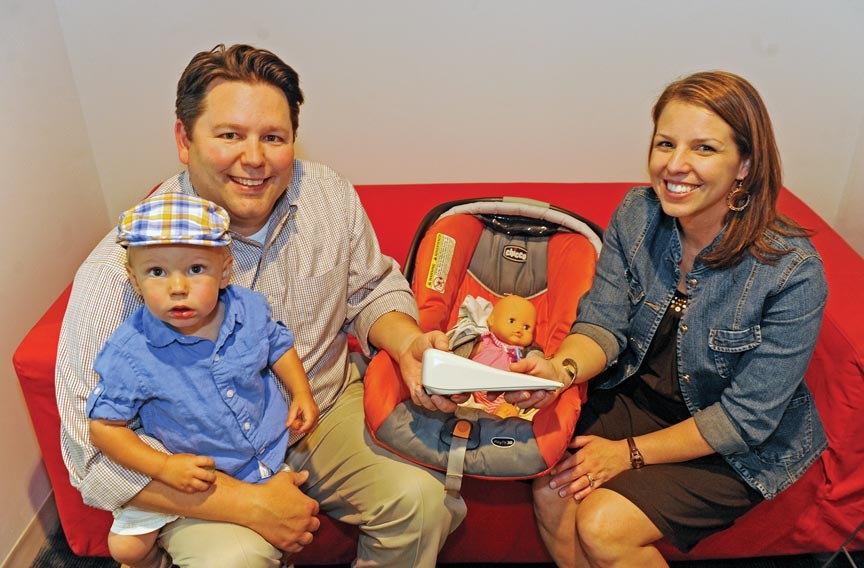 German luxury cars and a few barrels of grease.

From such unlikely concepts are successful companies made. Just look at Richmond-based BioRide, Ledbury and PoshTots.

But what about automatic cradle rockers, greeting cards for broken relationships or German lebkuchen cookies? Could one of these be Richmond's next big thing?

A competition to discover the region's most promising new start-up has provided a platform for local entrepreneurs to pitch their wildest dreams.

More than 50 entrepreneurs signed up for the Start-Up Competition as of Monday (May 8 was the registration deadline), sponsored by the Greater Richmond Chamber's I.E. entrepreneurial initiative and Tumblr (Style Weekly is a media sponsor). During the next month, finalists will be chosen to compete June 21 at CenterStage. The winner gets $10,000.

Several ideas are tech-based. Thank-YouPro is a mobile-phone app that designs, prints and mails customized thank-you notes for $2.99, less if you buy in bulk. It may sound like etiquette heresy, but it's better to send a printed note on time than never to send one at all, founder and chief executive John Testement says. And with a scanned signature and handwritinglike fonts, he says, "quite frankly, you often can't really tell."

Some are inventions. Brian and Ashley Harding, a young Chesterfield County couple with a 19-month-old son, are pitching a small device called the Dozer that automatically rocks an infant's car seat or cradle.

"There's always that fussy time" when you're transferring a baby from the car to the house or otherwise moving him around, Ashley Harding explains. The rocking device, which looks like a sewing-machine treadle, helps soothe the infant back to sleep. "It just gives you that extra bit of time," she says.

Other start-ups in the competition are the fulfillment of long-cherished, if quirky, dreams.

College librarian Amanda Hartman has spent four years perfecting her recipe for a confection made from almond flour, candied orange and lemon peel, spices and a lemon glaze. She calls them Gretel cookies, because lebkuchen doesn't roll off the tongue.

They're like "a German mouthgasm," raved one friend, who encouraged her to try to sell them. Hartman's baking in the Kitchen Thyme commercial kitchen (another entrant in the start-up competition) so she can meet state regulations, and she's searching for retailers to carry her cookies.

For 20 years Evelyn Allen kept an idea safely tucked in the back of her mind: a line of greeting cards for strained relationships. Such as for two sisters who haven't spoken in years, she says. Or a father who wants to reconnect with the children he abandoned. Or even "wayward children who need to apologize to their parents."

Allen recently lost the receptionist job she had for 19 years, which was just the kick she needed to start her company, Hearts-R-Mending. She's been busy composing cards for specific occasions: "The Lord has blessed me with the gift of verse," she says. Allen has even done some market testing. She sent her cards anonymously to nine grown siblings who've been quarreling for 20 years. It worked, she says: "Two sisters started speaking over the holiday."

All these entrepreneurs need, they say, is to win the $10,000 prize so they can better market and develop their products.

Even if their ideas sound improbable, don't dismiss them. It isn't the concept that matters as much as the person behind it, some of Richmond's expert entrepreneurs say.

The most important element for start-up success is "passion," PoshTots co-founder Andrea Edmunds says. "Go with your gut."

When someone tells Edmunds about a business concept, she says, "I will never tell them if I think it's a good idea [or] a bad idea." That's because six years ago a friend shared an idea that seemed doomed to crash. Edmunds kept her mouth shut, she says, and she's glad she did. That business became a success.

Of course you need a sensible strategy too, says Jerry P. Fox, Richmond managing partner of Cherry, Bekaert and Holland, the accounting firm that's putting up the $10,000 prize. "It starts with passion for what they do," Fox says, "but then really converting that passion into a business plan."

Kristi Lane is principal of Visible: Proof, a young business that helps start-ups with marketing, branding and eye-catching interior design. When two sisters approached Lane about starting a candy shop in Short Pump, she wasn't immediately wowed. "Another candy store? Do we really need that?" she thought.

But then, Lane says, she came to understand that the business was really about the shared experience of candy in childhood, and about delighting customers with the brands they recalled from their younger days. The shop, Sweet Spot in West Broad Village, is thriving.

Lane says she can tell within 30 seconds of meeting someone if their business will likely fly or fail.

A solid idea from someone who's ho-hum about it? Won't work. But if the person making the pitch is feverishly excited about it, Lane bets they'll succeed. "OK, you're going to make it," she thinks. "You're going to do something incredible here." S