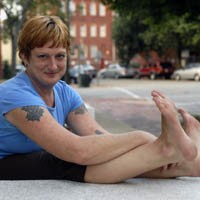 After eight years of presenting some pretty wild and provocative dance pieces to Richmond, it might be that Starr Foster just got tired of working with a stage. So in June she got a bunch of Appomattox Governor's School students to perform some pieces in the James River, with the audience sitting on the rocks. Some of those watching were there to drink beer and had no idea what was going on.

But that's OK with Foster. She's been sending it out there, choreographing work for audiences in Richmond, Seattle, Florida and elsewhere. What's more, she's been successful at it, often a rarity for an artist. But she says it's because of the 10 women in the company, all trained in different styles, like a "Charlie's Angels" of dance.

She says she's taking modern dance to the people, and that extends to the schools, where modern dance is rare indeed. Her company recently started the Neighborhood Project at places like the East District Family Resource Center, choreographing a dance work for at-risk youth from different places. Most hadn't performed before. It's an extension of the outreach work the company used to do at schools, but it's more site-specific -- at the Resource Center or the river.

It makes a stage of the city and dancers of people who never thought they'd do something like this. And makes an available audience wherever there's a warm rock.