Starlets in the City

After landing in New York, two former Richmond burlesque dancers provide humor behind the scenes of “The Immigrant.”

But the spunky James Madison University graduate, whose real name is Kendra Lansing, was "ready to be a little fish in a big pond," she says. And her 20s were quickly running out. So roughly three years ago, she headed north.

Lansing got an apartment in Brooklyn and a good waitress job at the restaurant Prune, where she still works, waiting on regulars such as Claire Danes, Steve Earle, Monica Lewinsky, Bette Midler and Jake Gyllenhaal. "I just put him on my mailing list!" she says of the latter. She also stays busy performing burlesque shows weekly.

But the biggest surprise happened early on. Just four months after getting to the city, she was asked to audition as a featured extra on the new film "The Immigrant," by acclaimed director James Gray ("Two Lovers"). The call came from her friend and mentor RunAround Sue, aka Susan Gardner, a Richmond native and graduate of Virginia Commonwealth University, who runs the Sugar Shack burlesque agency in New York. 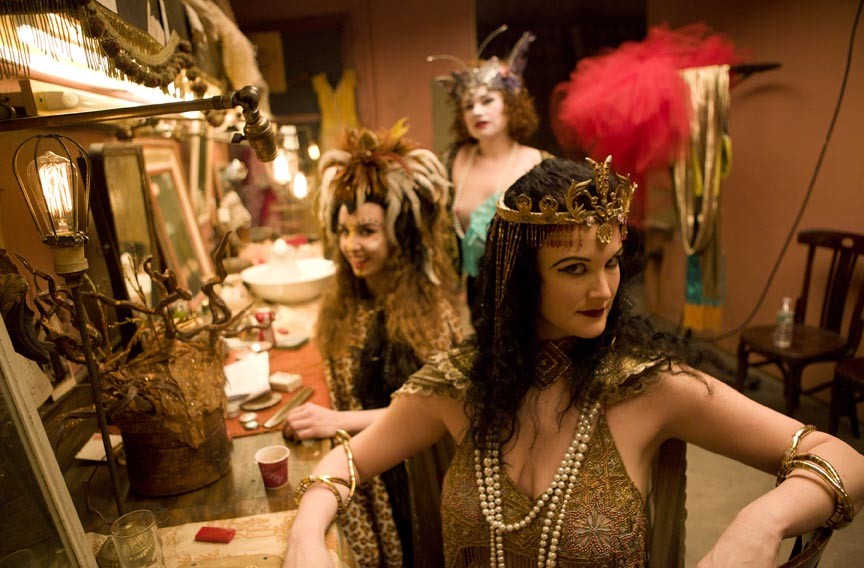 Lansing says her nerve-wracking audition took place in a tiny office in front of the director, legendary costume designer Patricia Norris, of "Twin Peaks" and "Scarface," and lead actor Joaquin Phoenix. She thought she blew it.

"They had us take off our tops and walk around in a burlesque style. It was in this terribly lit office, overhead lighting, very unflattering," Lansing says. "I think Joaquin was embarrassed but," she adds, laughing, "he didn't look away or anything,"

Lansing got the part as one of Bruno's girls, a coterie of 1920s dancers pimped out by Phoenix, who plays Bruno. The other big star in the film is French Oscar-winner Marion Cotillard, who plays a Polish immigrant named Ewa lured into the underworld straight from Ellis Island. Gardner has an even more prominent role as a Bruno girl with speaking parts and was credited as the film's burlesque choreographer.

The director, inspired by the early-20th-century tales of his Russian Jewish grandparents, has called it his "most personal" film to date. He wanted to hire real New York burlesque dancers for authenticity, Gardner says. "Burlesque has an amazing history. And back then in New York, it was basically a preview for that night's prostitution, which was much more common then."

Reviews of the film have been strong, with several major publications calling it a masterpiece, and the evocative, glowing cinematography by Iranian Darius Khondji ("Midnight in Paris") is being hailed as an early Oscar favorite. New Yorker critic David Denby swooned that the shots of Bruno's girls in the yellow light of a bathhouse "fit easily among classic genre paintings of female bathers."

Once shooting began, the nine burlesque girls stayed together and brought lighthearted humor to the somber set, evading the crew member designated to coral them, whom they called their "sexy prison guard." Their first shoot took place in a tunnel in Prospect Park during January when it was 30 degrees outside, leaving them cuddling under heated blankets with Cotillard in a much-used still from the film.

"Sue got frostbit on her nipples — it was that cold," Lansing says. "But there was no weirdness while cuddling. Marion's a fucking dream. Stunning, stylish and sweet."

After the filming, Cotillard gave each Bruno girl a quartz crystal because she said they'd brought so much energy to the set. "I put mine on my desk on a little shelf," Lansing says. Gardner's sits in her window.

Lansing describes Phoenix as a formidable presence given to rapping Lil Wayne songs and constantly smoking cigarettes on set.

"Super chill guy. At one point, he was having a hard time getting through a scene and we were laughing with him, making light of it," Lansing says. "He was like, 'actually this isn't funny' — he's a serious actor, unlike some of us. James [Gray] was always telling us, 'I really don't think you realize this, but this is a sad movie!'"

Gardner recalls convincing Gray to include certain dance sequences that she devised in rehearsals on the historic Kaufman Astoria Studios stage in Queens — numbers inspired by old photos and a Laurel and Hardy routine. She credits her self-confidence and perseverance to acting teachers at Mills E. Godwin High School and VCU.

Though she has no speaking parts, Lansing was thrilled with her close-up scenes. "My cigar smoking in the bathhouse made it," she says, "even if my boobs didn't."

Her first scene involves Bruno bringing Cotillard to dinner with the girls. "We had my work restaurant Christmas party the night before," Lansing says, "so I was so incredibly hungover. I was sitting there thinking: If I have to throw up in front of Marion and Joaquin, oh my god!" she says.

But cinematographer Khondji made her look amazing, she says: "When he's looking at you, you feel like a work of art. He really is the star of the movie."

A longer scene of hers involves a "women of the world" dance sequence, in which Bruno's girls are dressed up to resemble Miss Japan, Miss Egypt and so on. Lansing, credited as African Princess, was painted in black face. "But James said it was just too much," she says, "so the scene was cut."

Lansing attended the New York premiere courtesy of the Weinstein brothers. Gardner, who's entering grad school for social work, was too busy studying.

"There was a red carpet and super-fashionable people like Isabella Rossellini," Lansing says. "I said 'hi' to Joaquin and he asked me to sit down, and this girl was staring at me and I realized it was Uma Thurman." She laughs. "Everything was so memorable." 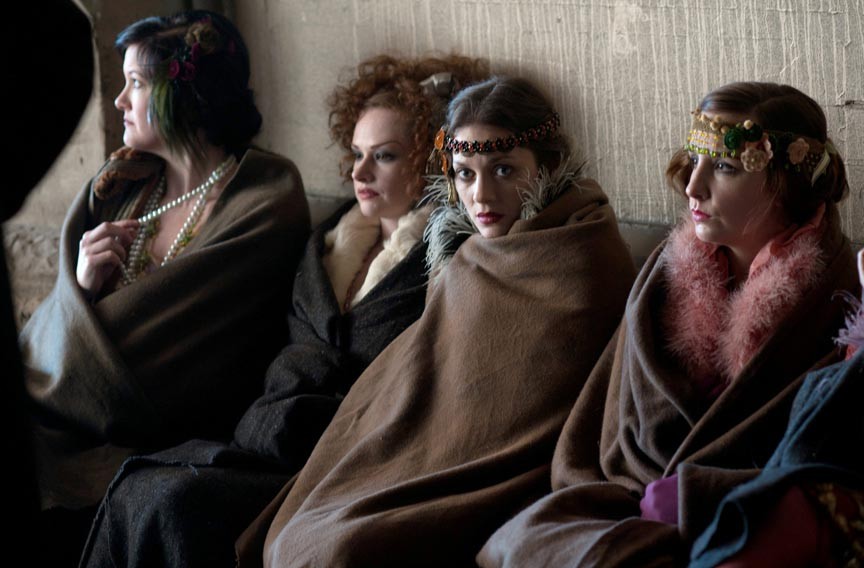 But their real premiere involved throwing a modern burlesque party for the cast at the Delancey bar in the Lower East Side, where Gardner holds burlesque events. Gray, Phoenix and supporting actor Jeremy Renner showed up.

"We wanted them to see us do our real thing. I look like Mary Poppins through most of the film, so we had social hour and I did my 'Slow Motion' routine to [rapper] Juvenile," Lansing says. "Joaquin kept getting in trouble for smoking on the rooftop. It's funny he's a big star, because he doesn't like being the center of attention. I took him to the side of the stage to see better but it was too close to the spotlight for him."

Since filming ended, Gardner has stopped performing burlesque while she prepares for a career in social work. Lansing isn't sure whether she wants to be an actor, noting that she doesn't have $3,000 to join the Screen Actors Guild. But since her film gig, she's done background work for the Netflix show "Orange Is the New Black" and Steven Soderbergh's "The Knick" on Cinemax.

"Maybe when ["The Immigrant"] DVD comes out, we'll have Bruno's Girls' Bloopers," Lansing says. "Or maybe we should just have a Bruno's Girls burlesque tour and we can come to Richmond!" S