Star Alignment: Richmond Spends a Night of Predictions and Profanities With the Long Island Medium 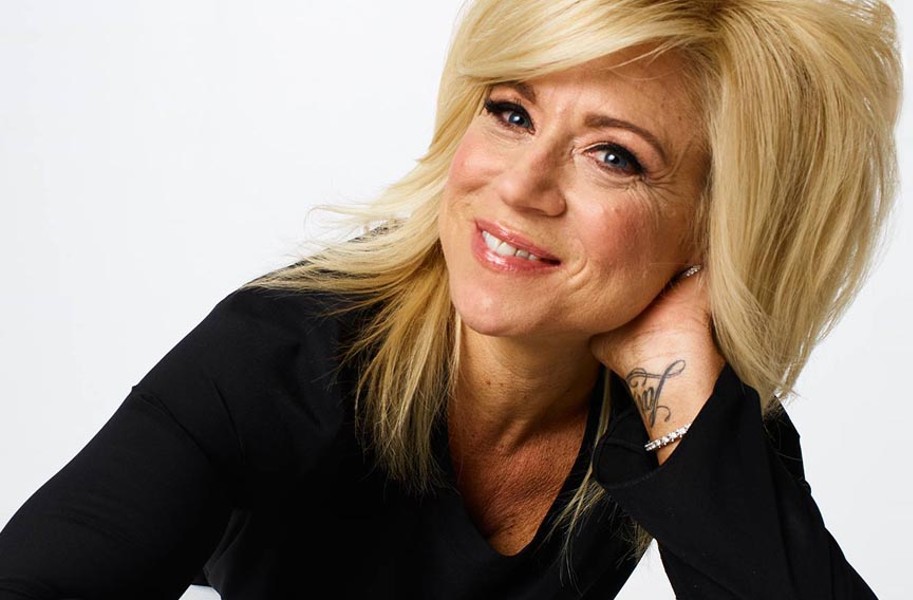 Her hair is a perfect omega.

Her nails are bone-white.

Her shoes are blinding.

And Richmond loves her.

Caputo apologizes for technical difficulties that briefly delay the show, but don’t worry: “Spirit never fucks up,” she says, sending the audience into an uproar.

In rapid-fire Long Island-ese, peppered with playful profanity, Caputo recounts her story — how spirits speak to her, how she feels their presence everywhere — and pre-empts doubters. “I don’t read your body language,” she says. “I read your soul.” And: “Spirit is only allowed to channel good things. This is about healing.”

She descends from the stage, trailed by two cameras that transmit her face, and those in the audience, to the screen. Her bronzed cheekbones shine. The readings begin.

She channels a father. “Know that I wasn’t disappointed, and I wasn’t afraid to die,” she tells his daughter. “Did you save one of his hats or something?”

“Yes. It’s in my purse,” the daughter says. She pulls out the baseball cap, her dark eyes brimming with tears.

She channels a son who died young. “He says, ‘Mom, I have no regrets about my life.’ Do you understand that?”

The mother takes a shuddering breath and shakes her head no.

“Perfect,” she says when she gets a detail correct — or when an audience member offers the information.

“How do you understand that?” she asks when she’s conveying an ambiguous message: an emerald ring, a tightness in the chest.

And when it seems she’s made a mistake, Caputo smoothly segues to another spirit. “Where does the husband come in that’s also departed?” she asks one woman.

“Um, that was by divorce,” she responds. The cameras slide to a new face.

Audience members mostly are women, young and old. So many of them have brought ashes in their purses. So many wear bracelets stamped with babies’ footprints. Everyone has tattoos of their lost sons and daughters and brothers and fathers. They have carried their heavy sorrows into this theater, to lay them down at Caputo’s jeweled feet.

And when they are chosen, and stand blinking into the fierce lights of the cameras, hope and grief fight on their faces in a way that’s difficult to watch. Caputo tells a 24-year-old woman that her deceased father is proud of her.

Caputo says, correctly, that the daughter carried a picture of her father as part of her wedding bouquet.

“Thank you,” the daughter whispers.

Near the end of the night, Caputo channels a husband whose wife cared for him during a long illness. He’s sorry he complained so much, Caputo tells the woman, who is older with dark circles under her eyes.

And did you find anything in his suit pockets? Caputo asks.

Yes, the wife replies: “I found money all over the place. … I found thousands of dollars.”

“That motherfucker,” Caputo says. “I hope you bought yourself a beautiful diamond ring. Or a car.”

“Well, I was good to myself,” the woman acknowledges.