Punchline Pride serves up a night of standup for the LGBTQ+ community.

In 2018, Apple Brown Betty attended the Black Cat Conference, an event advertised as a “night of sex-based infotainment for women.” The Richmond event’s goals were to destigmatize sex and empower women.

While giving a talk at the event, Betty touched on the notion that people try to dismiss queerness as being related to childhood sexual trauma. Afterwards, Betty was approached by a young lesbian.

“She came up to me after my talk and she had tears in her eyes,” says Betty, a bisexual standup comic. “She told me that I could help a lot of people, people need to hear what I have to say. It was very touching, very moving, and I never forgot her.”

When Betty began doing standup comedy two years ago, she saw that there was a need to create an event for LGBTQ+ comics here in Richmond. 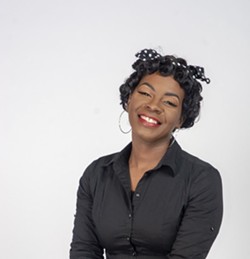 “As comedians, we kind of work out our trauma on stage, and as a person who identifies with any marginalized community, I saw an opportunity to be of service through comedy,” Betty says.

This led her to found Punchline Pride, a standup event taking place Saturday night at Sandman Comedy Club. The show features an all-LGBTQ+ lineup. Aside from making the audience laugh, Betty hopes the event will create a space for people to connect with each other.

“It’s a killer lineup that I’m super excited to have,” says Betty, who is headlining the event. “I’m glad they all said yes [to being in the show], because these are all people who are busy, working comics.”

The show will be hosted by Lucy Bonino.

“She’s super funny. She has a worldview that’s refreshing,” says Betty of Bonino. “I wouldn’t classify her as doing dark humor, but it comes from the recesses of the mind, the things we don’t talk about.”

“He’s super successful, very seasoned,” says Betty of Oakes. “What I like most about Anthony is, he does clean comedy that’s still very edgy and pushes the envelope. He can give a masterclass on pushing the envelope without being offensive to any one group of people.”

More than anything, Betty hopes Punchline Pride will create an inclusive space for those who attend.

“The show is for everybody,” Betty says. “Punchline Pride is a safe space to come, let your hair down, [and] laugh with your mouth wide open.”