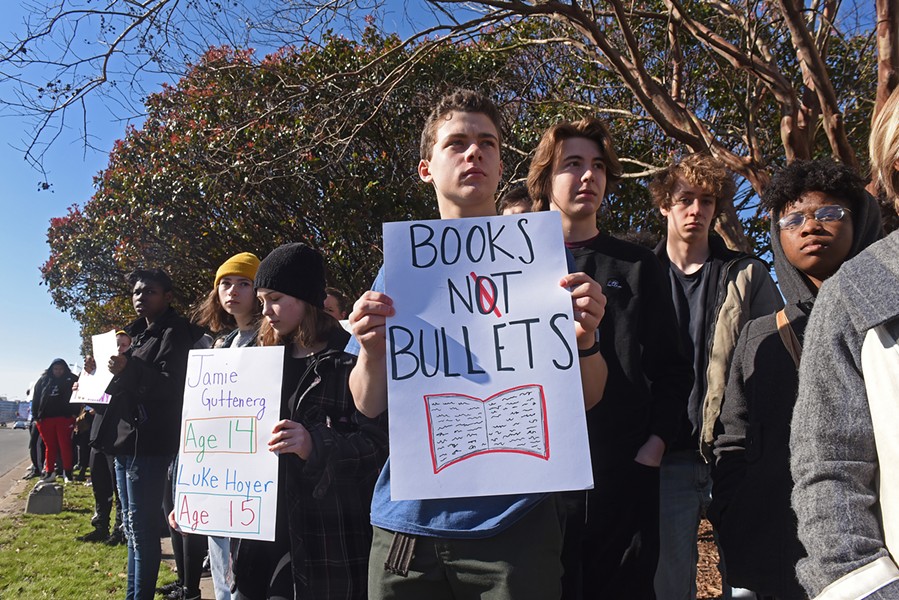 Scott Elmquist Around 90 students filed out of Open High School to march in silence in solidarity with the victims of the Parkland shootings on Valentine's Day.

At 9:55 a.m. Wednesday, about 90 students file out the front door of Open High School. Some hold signs, some chat with their friends and some walk quietly with hands in their pockets and hoods over their heads. The high schoolers cross Pine Street and line up along Belvidere.

“We’re going to have 17 minutes of silence for each of the individuals who were shot that day,” student Josue Ramirez says to the group.

Ramirez reads aloud the names of the students and teachers at Marjory Stoneman Douglas High School in Parkland, Florida, who died Feb. 14. He then reminds his classmates to please be respectful of the moment of silence, and a reverent hush falls over the crowd. With teachers and school administrators watching over them, the students stand in silence until 10:17 a.m.

Belvidere Street is relatively busy, and as cars and trucks fly by the kids, dozens honk and wave in solidarity. When the 17 minutes are up, the adults begin shepherding the group back to Open High, reminding them that it’s still a school day.

For 17-year-old junior Josiah Salgado, the walkout is an opportunity to be a part of something bigger.

“That was a little surreal for me. I have never in my life done anything like that for a bigger cause,” he says before returning to class. “I’ve never done anything bigger than me, and that’s really been calling to me recently. Parkland really hit me in terms of my peers and my safety and gun control in general.”

Salgado, who’s compiling a short film about the ongoing student-led movement on school safety and gun control, plans to attend the March for Our Lives in Washington on Saturday, March 24. He thought about sticking around Richmond that weekend for the march to the state capitol, but he feels that the protest in Washington will have a larger impact. He turns 18 in a few weeks, and he can’t wait for his first opportunity to vote. He’s already registered.

“It’s kind of sad, honestly, that we have to be the ones to do this,” Salgado says. “But I think it’s good because it’s going to show that our generation specifically is rising up and taking initiative to fix our problems that we have right now.”

About 10 miles away in Mechanicsville, students at Atlee High School also stand up and walk out of their classrooms. According to 17-year-old senior Kate Dotson, who finished a writing Standards of Learning test in time to join the walkout, teachers directed them to the school auditorium. Many students felt that “was not right,” she says, so part of the group left the building and stood around the flagpole instead.

“It was empowering to stand with people who were not afraid of standing up for their peers and their future, knowing that we were making a difference,” Dotson says.