The U.S. Postal Service is on a closing spree, but it’s not clear how it chose which branches to shutter. 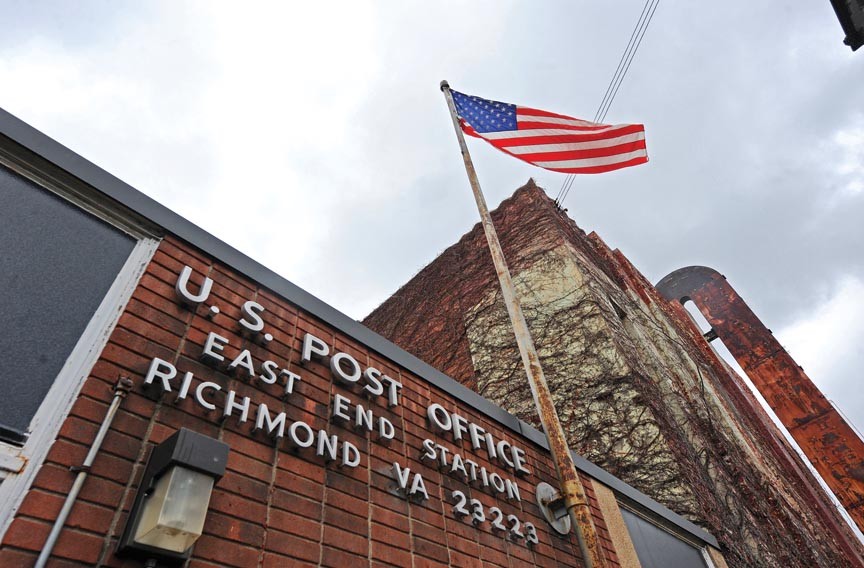 Willy Pressley is standing in front of the service window at Church Hill’s one and only post office when the topic of its possible closing comes up. “When do y’all shut down,” he asks the clerk through a thick pane of glass. It’s uncertain, she tells him. In regard to the long-term future of this 55-year-old building, nothing is.

The station at North 25th and East Marshall streets may be past its time, according to the U.S. Postal Service. Like thousands of stations across the country, it’s being considered for closure as part of a cost-cutting attempt.

But a recent report by a federal advisory committee cites multiple deficiencies in the process by which those branches were selected. Neighborhood residents such as Pressley, who’s lived in Church Hill since 1966, worry about the actual costs of the agency’s money-saving strategies.

The nearest alternative post office, he notes, is on Main Street in the heart of downtown. For the hundreds of Church Hill residents who, according to recent census data, don’t own cars, that may be a bridge too far.

“What about all the seniors, and the other folks here,” Pressley asks while sorting through a handful of envelopes. “When they need something from the post office, what happens to them?”

The Postal Service is at a crossroads. People are emailing more and shipping less. Delivery costs are up. Then there’s all that red ink. Last year the agency lost $5.1 billion.

As part of a controversial plan to cut some $20 million in expenses by 2015, the service announced the proposed closing or consolidating of more than 3,600 branches nationwide, with more than 90 of those in Virginia.

But upon review of the Retail Access and Optimization Initiative, the Postal Regulatory Commission bluntly concluded that the strategy — its name notwithstanding — is “not designed to optimize the retail network.”

What does that mean? For starters, people who rely on their local branches for things such as package shipping and money order purchases might lose convenient access to those services, says Ruth Goldway, the commission’s chairman.

“They said that they would determine the best offices to close, the ones that were least effective to the community,” Goldway says. “But instead they came up with these arbitrary screening criteria without taking into account public access.”

So how exactly did the East End station make the list? It’s a guessing game, really. The Postal Regulatory Commission describes a selection process seemingly led by bean counters in the Postal Service headquarters, with sites selected largely on the amount of annual revenue they generate and effect on service left out of the equation.

“They don’t have accurate records,” Goldway says. “Many of the smaller branches have their financial records lumped in with larger branches. It’s just how the system works.” In other words, there’s no way for the public to know whether the East End branch was underperforming, or what financial savings the Postal Service might gain by closing it. It’s also worth noting that federal law prevents the service from closing branches solely on the basis of revenue, or lack thereof.

What is clear is that the East End branch draws customers from one of the poorest sections of the city. Located in the heart of Church Hill, it serves nearly the entirety of the 7th City Council District, an area that’s home to more than 21,000 people.

Recent surveys by the U.S. Census Bureau indicate that 11 percent of residents living inside the census tract in which the branch sits are without personal transportation. That percentage increases in the tracts immediately east of the post office, an area that’s home to four of the city’s public housing developments — Creighton, Mosby, Fairfield and Whitcomb courts.

While that particular branch is easily accessible by bus to residents of the far East End, the alternative post offices aren’t, 7th District City Councilman Cynthia Newbille says: “Any of the other options present serious obstacles to access.”

For the Rev. Ben Campbell, lead pastor at Richmond Hill Christian retreat, it’s a clear indication that the decision makers in Washington are ignorant of residents’ needs. “People really need to pay attention to what it means to live in an urban neighborhood,” he says, “and what it means to live without transportation.”

For residents, there’s still time to make that clear. The Postal Service recently agreed to a congressional request to hold off closings until May. In the meantime, customers will have an opportunity to make their case to postal administrators as to why the East End branch should remain open at a public forum Feb. 15 at the post office, 414 N. 25th St., at 6 p.m. (A previous affair at the branch was canceled because notices weren’t mailed to neighborhood residents.)

At a meeting in her district last week, Newbille began what she hopes will be a grass-roots effort to keep the East End branch open. “It’s an anchor for the community,” she says. “We can’t lose it.”