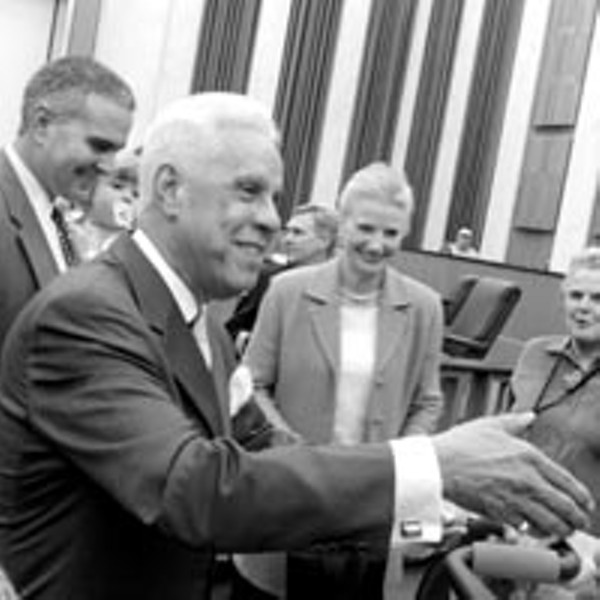 But Wilder's message went beyond Parker and Jamison. "I'm looking at all the measures that were approved like this," Wilder said, adding that he would be scouring other severance packages offered to senior officials at City Hall for signs of "backdoor deals." Then he met with Attorney General Jerry Kilgore Jan. 7, as Wilder put it, "to give us guidance, legally."

The week was full of Wilder flexing his political biceps: public hearings on Wilder's push for changes to the city charter, the inauguration with Bill Cosby, and the meeting with Kilgore, the GOP's likely gubernatorial candidate. And he lugged along two City Council members, Loupassi and William J. Pantele, to his press conference. The message: Wilder is taking names.

It's enough to make even longtime political scientist Larry J. Sabato blush. The professor from University of Virginia describes Wilder's return to politics as nothing short of "masterful." Wilder will dominate city and state politics at will, he predicts.

"He's turned a political retirement of irrelevancy … into a position of centralized power, not just for Richmond but for the state, at age 73," Sabato marvels. "Every major-party candidate is going to be coming, on bended knee, to Mayor Wilder."

But the overwhelming weight of Wilder's mayoralty also raises serious questions. Will anyone, on City Council particularly, challenge him? If City Council approves and the General Assembly amends the city charter to give Wilder the power of veto, what next? What happens if, say, Wilder decides he wants to put a new ballpark in Shockoe Bottom? Will there be checks and balances?

"I've always been in favor of checks and balances because the founders were correct," Sabato says. "But just suspend the rules while Wilder is in office," he adds sarcastically.

Does Wilder already have City Council under his thumb?

City Councilman E. Martin Jewell, in a tuxedo at Wilder's Jan. 3 inaugural ball, beamed with delight about the year to come. "We're a brand-new ballgame!" he exclaimed. "It's no longer each man for himself."

Indeed, Jewell says, there is a "seven-man team" out of nine council members who are prepared to be Wilder's supporting majority.

The two on the outs, according to a source who asked to remain unnamed, are Councilwomen Ellen F. Robertson and the Rev. Delores L. McQuinn.

At Wilder's press conference, just out of his earshot, Loupassi emphatically insisted he would stand up and disagree with anyone he believes is wrong — Wilder included. But so far everyone is on the same page, he said. "To be a fighter just to fight is just stupid."

City Councilman Pantele, who defeated Republican Thomas Benedetti in the November election, doesn't see constant conflict with the mayor in his crystal ball. "There is a mood of some excitement," he says.

He couldn't be happier that Wilder is investigating Parker and Jamison, because "City Council is outraged," Pantele says. Jamison couldn't find more than a paltry $300,000 to help distraught Shockoe Bottom business owners and their families after the August flooding, Pantele says, but somehow managed to find $85,000 for Parker and $175,000 for himself in severance.

"That's just extremely poor judgment in my view," Pantele says. "It's amazing how when the money is proposed to go to himself, or to a select group, the money appears out of nowhere."

While it's easy to agree to fight cronyism and to put more police on the streets to fight crime, Pantele says, disagreements with Wilder are almost certain.

"We may disagree along the way about one thing or another," he says. "From the conversations I've had with the others, I think this is going to be a strong Council. … Both sides of this government have to hear what the other is saying." S