Scott Elmquist A detail of the Annunciation at St. Paul’s Episcopal Church.

With Technicolor wings hovering over a surprisingly serene Virgin Mary, the be-crowned angel Gabriel holds his left hand aloft in a blessing. Oddly, he averts his gaze slightly off to the distance. Not looking at Mary is an act of grace that allows the Virgin, who has fallen to her knees with eyes downcast, personal space in which to process what she's just learned — that she will bear the son of God.

Nearby, a stylized dove, a symbol of peace, showers what may be rays of light upon the young woman.

The Bible describes numerous miracles and goings-on, but the Annunciation is one of the most momentous events within its pages. The scene is depicted handsomely in a stained glass window executed by the Tiffany Studios of New York. In 1901, it was installed in a rear corner of the sanctuary at St. Paul's Episcopal Church downtown. Through brilliant graphic design and mostly blue, lavender and dusty white hues of glass, it is clear that being in Mary's shoes, or sandals, required tremendous reserves of religious faith and trust.

With Advent next week, area churches should see a spike in attendance during the lead up to Christmas. Many of those attending morning services at churches may enjoy a visual treat that has significance at this time of the year: stained glass windows with scenes depicting the birth of Jesus Christ. Those churches generally have only one — of perhaps a dozen elaborate windows that illustrate religious narratives — that addresses the Christmas story. 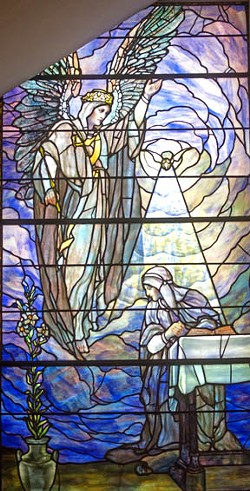 St. Paul's Church a century ago chose the Annunciation. The window, one of 10 at the church by Tiffany Studios, founded by Louis Comfort Tiffany, was given in memory of Mary Heath Newton and Eliza Nye Allen Davenport and Isaac Davenport Jr. Tiffany is synonymous with luminous stained glass, especially its distinctive favrile glass, a specialty of the workshop. Favrile comes from Latin for "handcrafted," and the glass is iridescent and multilayered, which give it a fluid character.

Tiffany glass was extremely popular in the United States the late 19th and early 20th centuries, and graces local interiors of not just well-endowed Richmond churches, but a synagogue (Beth Ahabah), homes (Maymont), cemetery mausoleums (Hollywood Cemetery), and a hotel (the Jefferson). Tiffany objects and windows are proudly displayed at the Virginia Museum of Fine Arts: Local collector and philanthropist Frances Lewis, and her late husband Sydney, collected Tiffany glass passionately and showered the museum with their largesse. 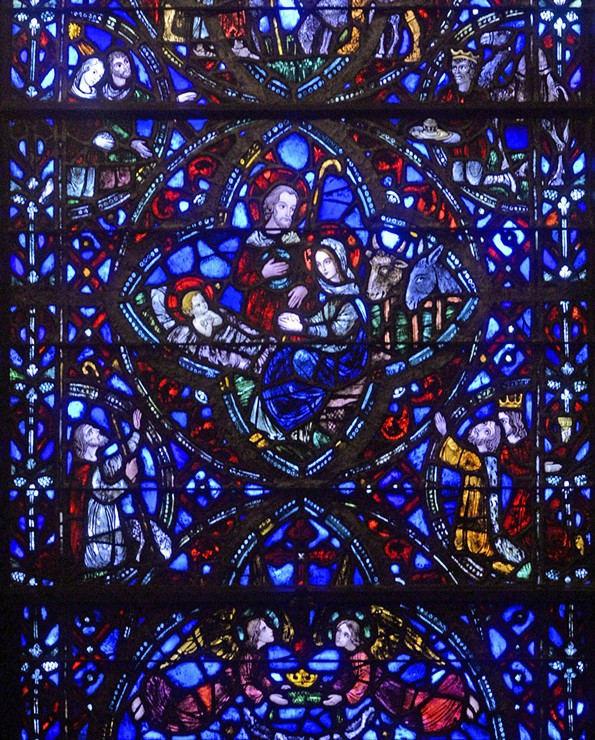 But St. Paul's has other stained glass treasures. In the undercroft (the level directly under the sanctuary) a chapel contains three stained glass windows. These are closer to the spirit of the windows those who lived in medieval times might have marveled at upon arriving at pilgrimage churches such as Chartres Cathedral in France. They are mosaic-like assemblages of intensely jewel-toned, pieces of glass. The proportion of the glass to the lead that holds the assemblage intact gives these windows a darker appearance. And because the viewer is drawn in closer to the window to decipher the nonverbal message, these windows offer a more personal experience. To those of us living in a world jaded by endless and seamless streams of visual information, it is hard to imagine how sensational and awe-inspiring it would have been to enter a religious space filled with light streaming through stained glass. To a mostly illiterate populace, the stories and scriptures contained in the windows would have been a revelation.

The St. Paul's chapel window that tells a Christmas story is the Marie and Kate Gerdy memorial, installed in 1936. In the center of the three-part window is a quatrefoil that frames the figures of Mary and Joseph with their infant son: A cow and donkey look on, a reminder that the family's low status relegated them to sleeping in a barn. In another vignette, an angel tells shepherds of Christ's birth and in another, three wise men and one camel are placed to the right of the manger scene.

This window, and its companions, was fashioned by Franz Mayer Co. in 1936, making it one of the last contemporary art pieces to come out of Nazi Germany to Richmond before the Second World War.

Christmas Eve services at the Cathedral of the Sacred Heart, on and engulfed by the Monroe Park campus of Virginia Commonwealth University, are a highlight of the holiday season here. No other church interior is as soaring, classically perfect or as acoustically thrilling as this Beaux Arts landmark dedicated in 1906. But Christmas Eve worshippers are denied a visual experience that occurs only during daylight: the Christmas window.

Located midway along the south aisle wall, a stained glass window depicts Mary, Joseph and baby Jesus in a traditional arrangement but in a blaze of eye-popping, colorful glory. Decidedly more modernistic and set with larger pieces of glass than the other works examined here, the window was created by the Francis and Pierre Chigot studio in Limoges, France. It was installed in 1956, along with other windows to replace the far less ornate enbrasures that dated to the church's completion some 50 years earlier. 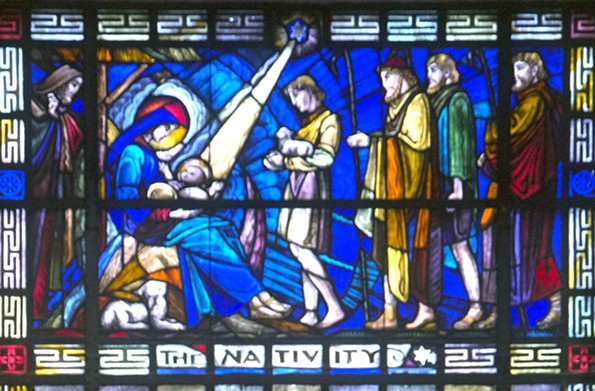 Another Fan District church with mid-20th century stained glass windows is First Baptist, whose campus is at Monument Avenue and the Boulevard. They were installed in the late Greek-revival-styled sanctuary in 1949, almost 25 years after the church's completion at the behest of the congregation's esteemed pastor, Theodore F. Adams. Designed by Katherine Lamb Tait, they were produced by the Lamb Studios in Tenefly, New Jersey.

The sanctuary windows of the upper balcony illuminate stories of the life of Christ. The corresponding windows on the lower level depict how those events influence the life and mission of the contemporary church. And unlike the graceful fluidity of the Tiffany windows, or the stoic character of medieval-inspired glass windows, the figures depicted in the First Baptist windows are rendered in stiff profile; akin to a Greek frieze — each a static tableau.

But not to worry, the 20th century was highly capable of producing beautiful works of art and these are among them. The Christmas window is a line-up of seven figures: From left to right are Joseph, Mary, the infant, a shepherd holding a lamb and three additional shepherds. The arrangement is simple, the message clearly delivered and the colors are brilliant, thanks in part to the extensive refurbishing and restoration of all the sanctuary windows earlier this year. 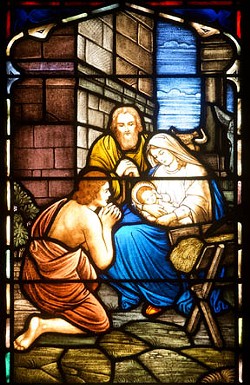 The large stained glass windows in the upper reaches of the light-filled church were reused when the congregation moved from its former sanctuary, which was at East Marshall and North Eighth streets. These memorial windows carry inscriptions in German, the language used almost exclusively by the congregation until early in the 20th century, and understandably discontinued with the outbreak of World War I.

In 1948, eight smaller stained glass windows were set in the walls along the outer aisles. These windows depict the life of Jesus. The first, the Christmas window, portrays his birth and takes its cue from the Book of Luke and its narrative of the visitation of the shepherds. It reminds the viewer that those who first recognized Jesus as the Messiah were not the highly educated, but those who lived close to God. The window is a memorial to Stuart Brauer. 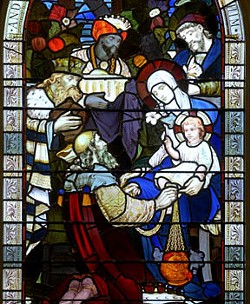 Those looking for a bold depiction in colored glass of the visit to the manger by the Magi would be well-served to visit Emmanuel Episcopal Church, tucked away in a sylvan setting off Brook Road near Azalea Avenue. The interior of this intimate, antebellum, Gothic Revival sanctuary with its wooden beam ceiling and plaster walls, is animated by 13 windows.

Close to the altar is a window installed in 1889 to memorialize John Stewart, one of the congregation's founders. "The Adoration" window places the three wise men, each clutching a gift, on the left side of the window. On the window's right side are Mary, child and Joseph.

The window was designed and crafted by the Charles Booth Studio in Tenafly, New Jersey, and it, too, was recently cleaned.

Of course, there are dozens of other stained glass windows in other area churches that tell in dazzling color the story of the birth of Christ. And sanctuaries and worship spaces will come alive with other activities and displays that celebrate the season — crèches, pageants, concerts, carol singing and seasonal decorations.

At St. John's United Church of Christ, in addition to its permanent Christmas window the nativity scene will become three-dimensional … and multiplied by 50. That is the number of crèches of various sizes collected over the years from around the world that will be displayed throughout the sanctuary. "They symbolize the universality of the message of Christmas," says the Rev. Linda Higgins, the church's pastor — and herself a collector of crèches. "They were constructed in dozens of countries, but they all say the same thing."

Hmm. Not unlike Richmond's trove of windows that celebrate the meaning of Christmas, whether designed and crafted in Limoges, Munich, or Tenafly. S