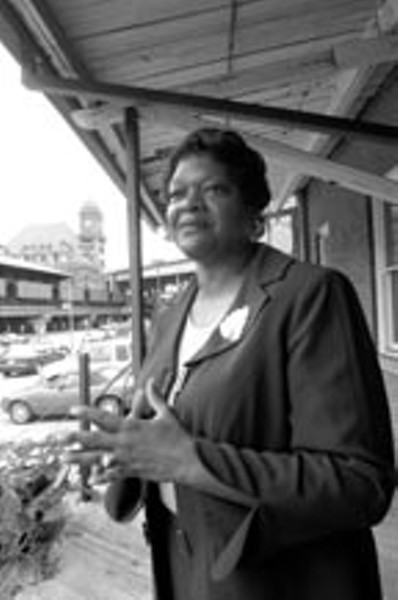 Some worry that the dig, widely viewed as an effort to thwart the Richmond Braves' ballpark plans, may stall engineering and site preparation work for a nearby stadium. A state official said last week that a significant discovery — the initial research will take up to six months — also could lead to a change in how the state and federal government view the Bottom's historical significance.

"If this research supports the claim that there are remains there of Lumpkin's Jail," says Robert A. Carter, community services director for the state department of historic resources, "there could possibly be a boundary adjustment to the national and state registries." There's no way to know when and how long it would take for the area to be included on the historic registries, Carter says.

The archaeological work itself, since the federal government isn't paying for it, shouldn't directly affect plans for development nearby, Carter says. But expanding the boundaries of the national and state historic registries could erect a potentially significant hurdle for a new ballpark.

In the event of a major discovery, the stadium site just north of the 17th Street Farmers' Market would be deemed more historically sensitive, increasing the likelihood that a new ballpark, or any other kind of major development, would disturb the area's historic fabric. That designation, in turn, could further jeopardize the ability of nearby business and property owners to obtain historic tax credits for renovation projects.

In a letter dated June 3, Kathleen S. Kilpatrick, director of the Virginia Department of Historic Resources, warned that "the stadium as proposed could trigger the removal of the Shockoe Valley and Tobacco Row Historic District from the Virginia Landmarks Register and from the National Register of Historic Places."

The removal of that designation, she continued, could have "serious negative economic consequence of foreclosing the opportunity of present and future property owners to use the state and federal historic tax credits to rehabilitate the remaining unrestored buildings in Shockoe Valley."

ACORN, the preservationist group that has taken the lead in repelling the downtown ballpark, is working on revising the nomination form that would put the site of Lumpkin's Jail, also known as the Devil's Half Acre, on the state and national historic registries as well. The property is currently not listed.

McQuinn, chairwoman of the Richmond Slave Trail Commission, which has been working to establish a walking tour of former slave-trading sites and markers, says the push for an archaeological dig started about a month and a half ago. She maintained the timing wasn't coordinated to interfere with the ballpark, but rather an effort to validate the area's rich slave-trading history.

"The ballpark didn't have anything to do with it," she said, adding that it is possible that a stadium could still be built nearby. "I don't know if they could co-exist. … But all of us need to appreciate the sacredness of the ground where we stand."

At least one ballpark proponent, local real estate developer Ted Cox, stood in the back of the crowd during the press conference Sept. 23, cracking a wide smile. The city needs to pony up another $2,500 to match the $2,500 given by ACORN to finance the dig in order to receive the state's $5,000. The total cost of the research is expected to be $10,000, McQuinn said.

Cox, seemingly confident a ballpark will be a reality, told McQuinn after the meeting that he and other business owners in the Bottom would be happy to pay the remaining $2,500.

They'd be happy to "pull together" a check, he told her. S