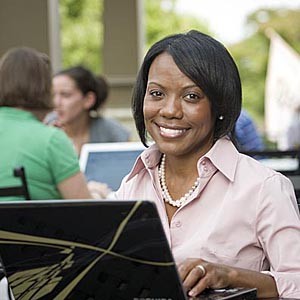 “Each of you is a pearl in progress,” Stacy Hawkins Adams tells the women's groups she speaks to. The toughest trials we endure, she says, shape us into “people of purpose.”

Adams knows this only too well.

Her first novel, “Speak to My Heart,” started out as a story about all the late-20s crises her friends were going through — boyfriends and jobs, the usual things. Then her son was born with a tumor on his heart, and Adams was plunged into a world of tests and prognoses. Life changed fast.

When Adams reread her novel, it suddenly seemed trivial. She rewrote the manuscript, which became a story about a woman struggling to forgive her mother's betrayal and keep her Christian faith. Published in 2004, the book soon was followed by two sequels. Adams' fourth novel, “The Someday List,” hit No. 7 on the Kindle bestseller list in 2009 and was nominated for a Library of Virginia fiction award.

In addition to writing and parenting (Adams' son is 9 and doing fine, the tumor on his heart having dissolved on its own; she also has a daughter, 12), Adams mentors other writers. She founded the Richmond chapter of the American Christian Fiction Writers, and this year began group coaching sessions called Author in You.

Adams, who also is vice-chairwoman of Voices for Virginia's Children, donates a portion of her sales from book release parties to local youth-focused charities. She also donates 30 hours of speaking time each year. She recently talked to inmates at the Brunswick Women's Correctional Center, telling them that they, too, are “pearls in progress.”

“I don't know how she packs 80 hours of stuff into 40 hours a week,” says Adams' friend and former Times-Dispatch colleague Robin Farmer.
Adams credits her family and friends with helping her do it all. And, she says, “I don't cook a lot.”