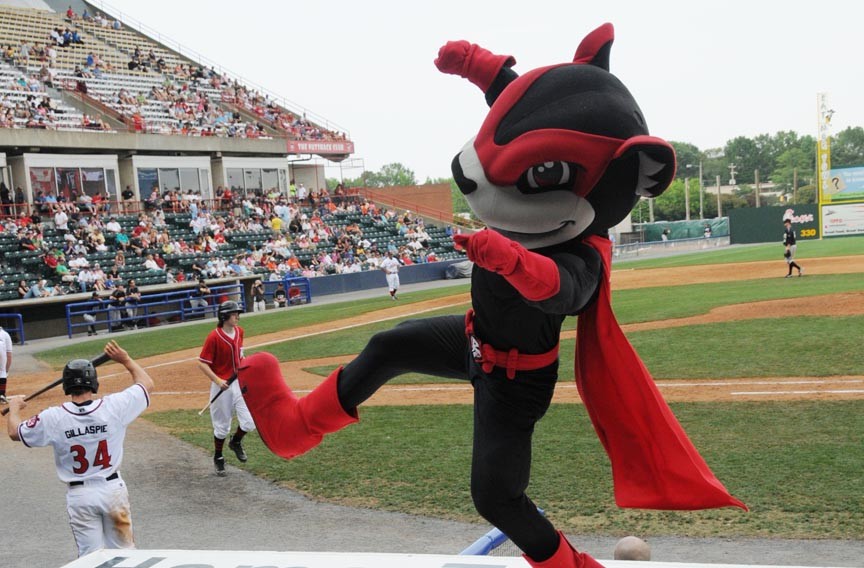 Understandably, Nutzy’s getting a little anxious. Two years after re-energizing Richmond’s dormant sports landscape with a new team — not to mention alligator wrestling and rally pigs — the owners of the Richmond Flying Squirrels are already playing the dreaded “we’ll leave if you don’t build it” card.

Team owners recently contacted Minor League Baseball to initiate discussions about a possible relocation, The Richmond Times-Dispatch reported Oct. 25. Mayor Dwight Jones immediately issued a statement declaring the city is preparing the property next to The Diamond on the Boulevard. City Council passed a resolution heaping praise upon the team’s owners. Squirrels managing partner Lou DiBella also issued a statement after the dust-up, declaring “we are not actively looking to other locations at this time.”

Still, all the commotion begs the question: Would the Squirrels really leave so soon? The team, after all, led the Eastern League in attendance in 2010, averaging 6,626 fans a game. This year, they did slightly better, averaging 6,679 fans a game. They’ve also dropped $2.5 million into the aging Diamond and spent considerably more on branding, bringing in a management team widely considered one of the best in baseball.

“I think it’s a serious long-term threat. I think it’s a nonserious short-term threat,” says Kevin Reichard, editor of Ballpark Digest. DiBella is also a boxing promoter, Reichard adds — so bluster is part of the package. “Fish has got to swim, and Lou’s got to talk big.”

There’s a reason DiBella moved his team to from Norwich, Conn. When the Richmond Braves relocated to Gwinnett County, Ga. — for a new stadium, of course — in 2008, there were plenty of minor league franchises itching to replace them. Richmond has a long history of supporting baseball, and there simply aren’t many markets of Richmond’s size without existing teams.

The real question is whether the Squirrels could make more money elsewhere. “They are going to conduct a cost-benefit analysis and determine whether they could make enough on an alternative market,” explains David Swindell, a sports economist at the University of North Carolina at Charlotte.

When new owners buy a team, Swindell says, they typically expect to post a profit by the fourth year. That’s where a new stadium can make a real difference. Newer facilities are built to keep people spending inside the park — multiple restaurants, sports bars and arcades for the kids, for instance. It’s more about the potential to make money inside the stadium, Reichard says, not raw attendance figures.

Chuck Domino, chief executive manager of the Squirrels, says that’s not really the goal. “We’re hoping that a new stadium would generate more attendance, period,” Domino says. A reasonable goal, he says, is 7,500 a game.

The city has promised a new stadium would be built all along. In a statement, Jones says preparatory work has already begun on the stadium site, but the city needs financial help from its neighbors — Chesterfield and Henrico counties — to finance a new $40 million to $50 million ballpark. But did the city wait too long?

Domino says frustration grew over the last year as talks with city officials tapered off. “In the first year, we were on target for a 2014 baseball season in a new stadium,” he says. “It just seems we’ve been stuck in the same spot.”

And from the Squirrels’ perspective, time is leverage. Jones is entering an election year, assuming he runs for re-election, along with all nine City Council members. Domino says the team wants to see considerable progress with a new baseball stadium in the next four or five months, or it may consider other options. The threat of losing the Squirrels would obviously become damaging campaign fodder.

And, of course, that doesn’t even broach the real policy questions surrounding government-subsidized baseball stadiums. Sports economists widely agree they generate next to no real economic impact, and are just as likely to be a net loss for taxpayers. “It certainly becomes a legitimate political question to ask, ‘Why should we subsidize your profit margin?’” Swindell argues. “Government doesn’t build movie theaters.” (Believe it or not, some do actually build performing arts centers.)

DiBella moved his team to Richmond, however, with the understanding that a new stadium would eventually be built. DiBella’s group also has committed to putting up a fourth of the cost of a new facility, $12 million or more, equal to the contributions from the city, Henrico and Chesterfield.

“Certainly we wouldn’t move just to move,” Domino says. But: “I don’t want anyone to think these are idle threats. We would really do our due diligence. … We would look at all options if we needed to.” S