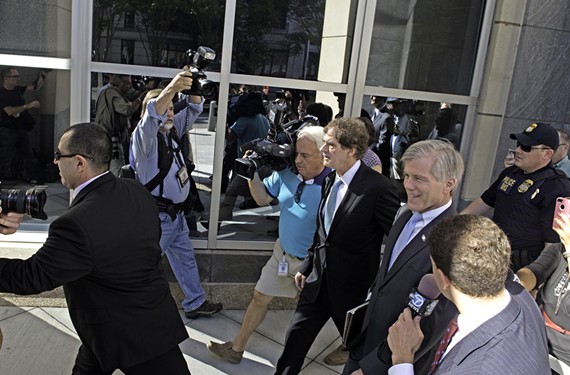 Thanks, Senators. We needed that.

Whether they like it or not, state Sens. Tom Garrett, Bryce Reeves, Tommy Norment, the majority leader, and the rest of their recalcitrant colleagues in Richmond just became the poster children for Virginia's newspaper industry. If publishers around the commonwealth don't use these politicians' snarky remarks in promotional ads, they will have missed a great opportunity.

In case you haven't heard, whiners in the General Assembly have been griping about ethics reform, even as they worked on legislation to address ethical problems. You see, they blame the press for forcing them into stringent measures they don't like.

These unhappy lawmakers apparently pine for the good old days when pols were free to slurp up as many freebies as they wanted as long as those freebies were reported. They called it The Virginia Way.

And it didn't work.

With one former delegate in the federal pen on bribery and extortion convictions and a former governor headed to federal prison for corruption, The Virginia Way became a punch line, a naive assumption that all politicians in the Old Dominion were honorable.

Both houses on Tuesday passed reform legislation. The measures lowered the value of gifts elected officials can accept from lobbyists or those with state business from $250 to $100 and even addressed the issue of "intangible" perks.

Make no mistake. Many of the politicians were unhappy with the bills. Even those who voted for them.

"Most of us are going to vote for this bill. Why? Because we have the press that's going to beat us over the head if we don't," Reeves said.

According to Pilot reporters who were in Richmond on Tuesday, Garrett actually huffed, "There's this perception that we're out here driving around in Ferraris."

Of course there is. Because one politician - former Gov. Bob McDonnell - was caught doing just that.

We've all seen the pictures, senator.

At the risk of sounding cynical, none of us is so naive as to think McDonnell is the only one who's been tooling around the countryside in a wealthy patron's sports car or staying for free in borrowed vacation houses. Sadly, this bill may not completely stop such behavior.

But it's a start.

It appears that McDonnell broke no Virginia laws with the gift-grabbing behavior that landed him and his wife in trouble with the feds. In fact, had it not been for federal prosecutors, he might be barnstorming around Iowa right now.

Clearly, Virginia needs to put limits on gifts. Politicians have demonstrated that they can't police themselves. Don't take my word for it. Look at the lists of goodies they gobbled up last year.

But even as they crafted laws to make life a little less plush for themselves, some grumbled about the role of the media.

"You know why we are doing this," Norment blustered at a hearing on the senate bill last week, according to The Pilot. "Because the media is on our back."

Good. That's exactly where the press belongs. Members of the media need to be shining a spotlight on questionable political behavior, legal and illegal. The public has a right to know how government business is conducted. If newspapers don't tell them, no one will.

It's unfortunate that Virginia needs laws to stop legislators from taking gifts worth more than 100 bucks. Shoot, some of us wish the amount was zero. No gifts. Ever.

To borrow a phrase from former first lady Nancy Reagan, they ought to be able to "just say no." She was talking about drugs, of course. But gifts seem to be every bit as addictive as crack to politicians.

According to Pilot reporters, Norment on Tuesday reiterated that it was the press that forced the ethics votes. To shelve the bills would be disastrous, he warned his colleagues.

"Trust me, we will be lambasted, we will be ridiculed, we will appear on every opinion page and every newspaper in the commonwealth of Virginia because we did not act," Norment said.

Well, he got that right.