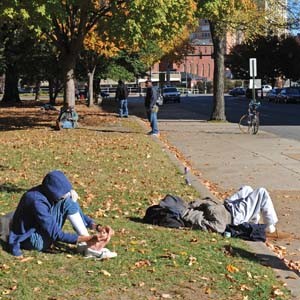 Can the homeless claim squatter's rights?

Advocates for the homeless in Monroe Park are crying foul over the park's planned $6.2 million renovation, asking where the homeless will go. But another issue has yet to be raised. If a squatter can legally lay claim to abandoned property after occupying it for an extended period of time — in Virginia, it's 15 years — perhaps it's possible the homeless can do the same at Monroe Park.

It likely would be an uphill battle, but at least a claim could be raised. While commonly referred to as squatter's rights, the legal term is adverse possession, in which someone can claim title to a property after occupying it.

Brenda CastaAñeda, a lawyer for the Virginia Legal Aid Justice Center, isn't sure whether the concept applies when the dispute is over public land. Monroe Park occupies nine acres of public green space at the heart of Virginia Commonwealth University. To be successful, a squatter must prove his or her right to legitimate ownership, she says, adding a caveat: “I wouldn't necessarily call people who are homeless squatters.”

Given that the park's public, proving ownership might not be possible. And because they don't actually live in the park, homeless people who frequent the park aren't due a notice of eviction. But hypothetically, someone who filed a case would be granted a hearing, CastaAñeda says, which might cause a delay in Monroe Park's renovation. While no firm timetable has been set, construction could begin in April.

Meanwhile, the controversy over the park's renovation isn't dying down. City Councilman Charles Samuels met with homeless advocates at the Carillon in Byrd Park last week to brainstorm alternate plans for serving the homeless when the park closes.

Like the homeless who congregate there, the food programs that serve in the park will be displaced once it's closed.