With the warmer weather on its way, Richmond theater-goers in the mood for some light entertainment are in for a double treat. Two musicals just opened in town and both are tributes to big stage shows of the 1920s and 1930s, boasting catchy tunes, upbeat dance numbers and talented ensembles.

First, there is 5th Wall Theatre's production of "Pump Boys and Dinettes," a musical revue in the style of the Grand Ole Opry. Set in Frog Level, North Carolina, this country musical zooms in on two small businesses sitting side by side on Highway 57: the Pump Boys' service station, where the Pabst Blue Ribbon flows freely and fishing trips are a holy endeavor, and the Double Cupp Diner, where sisters Rhetta and Prudie Cupp serve up hot coffee, fresh pie and plenty of sass.

Audiences at this musical will enjoy toe-tapping country and western songs about fishing, drinking, beach vacations and the importance of tips. It's fast-paced and fun, with ample opportunities for audience participation. This is the kind of show where sitting in the front row may mean you find yourself onstage, dancing with Prudie Cupp or receiving a serenade from Jackson, the romantic among the pump boys. They'll even send you home with a car air freshener or a Polaroid photo with the cast as a souvenir.

The cast of "Pump Boys and Dinettes" is composed of incredibly talented quadruple threats. Actors perform their songs and bits while playing musical instruments, with tap shoes, kitchen utensils, and a few cast-iron pans for percussion. Director Richard M. Parison Jr. has a knack for smart casting, and he's built an excellent ensemble with palpable onstage chemistry.

John Mervini is just right as the Pump Boys' ringleader Jim, and as the nerdy L.M., Mike Cefalo oozes charm from behind a thick pair of glasses, piano and an accordion. Michael Bamford is swoon-worthy as Jackson and Sean Powell steals a scene or two in his role as the mostly silent Eddie. Rachel Marrs and Desiree Roots Centeio are perfectly matched as Rhetta and Prudie Cupp, respectively, and one of the best musical numbers was the slow ballad love song, "Sisters," in which the two of them lament their fraught sibling relationship.

Other standout musical numbers include "Fisherman's Prayer," in which the pump boys rise at dawn to engage in their most sacred tradition, "Be Good or Be Gone," in which Rhetta Cupp issues a warning to Jim if he wants to keep dating her, and "The Best Man," which has Desiree Roots Centeio prancing and teasing the audience as she sizes up all the men at her disposal. 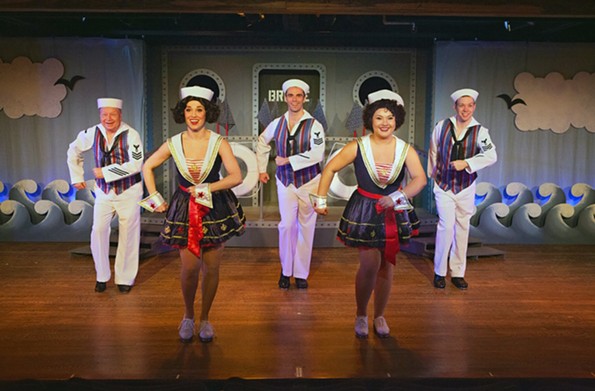 Swift Creek Mill's "Dames at Sea" channels Busby Berkeley in the show that kicked off actress Bernadette Peters' career and helped usher in the off-off-Broadway movement when it opened at the legendary Caffe Cino in Greenwich Village in 1966. With a plot centered on Broadway newcomer Ruby's rise to stardom, which happens overnight, "Dames at Sea" parodies the big spectacle-driven Broadway dance shows of the early 20th century.

Tom Width's direction emphasizes the silliness, with over-the-top reactions and lots of great physical humor from all his talented actors. Anne Michelle Forbes is a bubbly delight as the squeaky-clean and naive Ruby, who steps off a bus and into Broadway stardom — and into the arms of handsome sailor-turned-composer Dick, played by Travis West. Nicole Morris-Anastasi is perfect as Ruby's hard-boiled tap-dancing friend Joan, and Derrick Jaques is a joy to watch as Lucky, Joan's boyfriend. Robyn O'Neill and Steve King had great comedic chemistry as aging Broadway starlet Mona Kent and her old flame, the Captain.

Overall, though, the cast of "Dames at Sea" don't really gel as an ensemble. Maura Lynch Cravey's costumes are all adorable and add much to the visual appeal of this production. And while Alissa Pagnotti's choreography is fun — I especially enjoyed a scene in which actors dance with umbrellas, open and twirling around Ruby's face — it sometimes feels confined. Width's set hides the orchestra but keeps the action close to the lip of the stage, so all of the dancing happens in this flat, shallow space. It's campy, a quality I usually enjoy, and one that's definitely in the spirit of this musical's avant-garde beginnings. But in this case, on this stage, it means the big musical numbers can feel a bit underwhelming at times. S