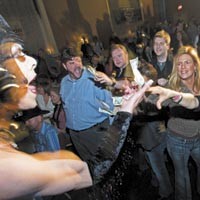 Only a third of the 22 drag shows scheduled have come to pass. Music and cigarette smoke spill out of the Renaissance Conference Center's packed ballroom, where guests wind their way through banquet tables to the end of the catwalk. They dole out singles for the flashy dresses filled out with fake tits, while painted lips move in sync with classics from the gay canon: Bananarama, Sonny and Cher, hits from the musical “Rent.”

In the foyer beyond the bar, a few feet from the ice sculpture in the shape of the Fan Free Clinic's logo — which tonight's fundraiser benefits — a drag king fiddles with his camera. He came all the way from Charlottesville, ace bandages wrapped tight across his chest.

“They tuck, we bind,” he says mischievously. Still a few months shy of turning 21 — with the cannot-drink-Xs across his hands to prove it — he says the hour's drive is worth it. Richmond, it seems, is becoming the place to be for alternative lifestylers. The scene's better here, he says, where “gay people always come out in the spring and summer.”

The seasonal call for gays, lesbians, transgenders and bisexuals may or may not be a product of the weather. But for Richmond's sexual minority, with its long history of closeted conservatism, social activities with a political point seem to be springing up more than ever before — fighting for their rights with a party.

Case in point: Roland Winston. Standing at the back of the room with a drink in one hand, he explains his cause, a group called Join the Impact. On the same day Barack Obama was elected president, Proposition 8 passed, banning gay marriage in California and jump starting a wave of gay activism. The measure is still under review at that state's Supreme Court, and Winston's group is poised to throw either a party or a protest on the day it's announced.

Join the Impact launched a few days after the 2008 elections. The recent political cycle has energized folks to stay active, says Kevin Clay, a recent Virginia Commonwealth University graduate who attended the Fan Free Clinic fundraiser and the even larger 20th anniversary party April 4 for Equality Virginia, a statewide lobby group that fights discrimination against sexual orientation and gender identity.

“The 2008 election was the first time I got politically engaged and I think for a lot of people that was their first political experience,'” he says. “But what's the next step? There are all these causes I still care about.”

In Clay's case, the next step was launching gayrva.com, an online clearinghouse for community events throughout the city. Only a few weeks old, it pulls together events from the city's scattered social groups ranging from the $3 Bills — a gay sports team — to the Fourth Friday meet-ups where droves of revelers break out of the traditional gay drinking enclaves such as Babe's and Godfrey's and descend en masse on a mainstream watering hole.

While the Fourth Friday meet-up crosses cultural lines, Scott Sibley's new Richmond Queer League, with a Facebook presence that's topped 300 members, aims to bridge subcultures within the queer movement. Sibley, a former Marine who dated a fellow Marine for three years during his service, was distressed by what he saw as the balkanization of gays versus lesbians versus transsexuals in the city. He also launched a queer night for all at the Pearl nightclub Tuesdays in Shockoe Bottom.

“The only way you can fight ignorance is to show people we aren't that different,” Clay says. “Maybe with the social events it's easier to digest than protesting with big signs. Baby steps.”

The gathering at the Renaissance demonstrates the same. A Tina Turner impersonator snatches up single dollar bills between choruses of “Proud Mary,” and all of the ticket proceeds go to the Fan Free Clinic, Virginia's first free clinic and first free HIV and AIDS outreach program. The event generates $7,500. Four local gay bars have closed for the night to funnel people to the event.

“I think the community is just kind of at a tipping point where they want to get out in the public eye,” Clay says, and in Richmond, just being out of the closet in public seems to be a political act.

Not that it should be, says John Dougherty, executive director of the Richmond Organization for Sexual Minority Youth. Among other things, his group runs youth groups here and in Charlottesville that try to teach sexual minority kids how to advocate for themselves.

“I think a lot of what we do is build safety and security in being who we are in a public way,” he says. “There continue to be very few adult role models because in the adult community there are very few protections for those who are out. … Today you don't see many couples, if any, walking down Cary Street holding hands.” If you do, he adds, it's often teenagers driven by rebellion and the expectation, if not the intent, is to encounter some disapproval.

ROSMY is gearing up for its second annual alternative prom for high-school students who may feel uncomfortable showing up with same-sex dates to their proms, or in dresses when they're expected to sport tuxes — or vice versa.

“It's still a big deal for us to be doing this alternative prom and it shouldn't be,” Dougherty says. “It shouldn't be that exciting. It should be a prom.”

Sibley echoes Dougherty's sentiments. All the protests, and parties and pride are nothing new.

“We have always been here and we want our equal rights and we aren't going to stop until we get them,” Sibley says. “But we're doing it nicely.” S