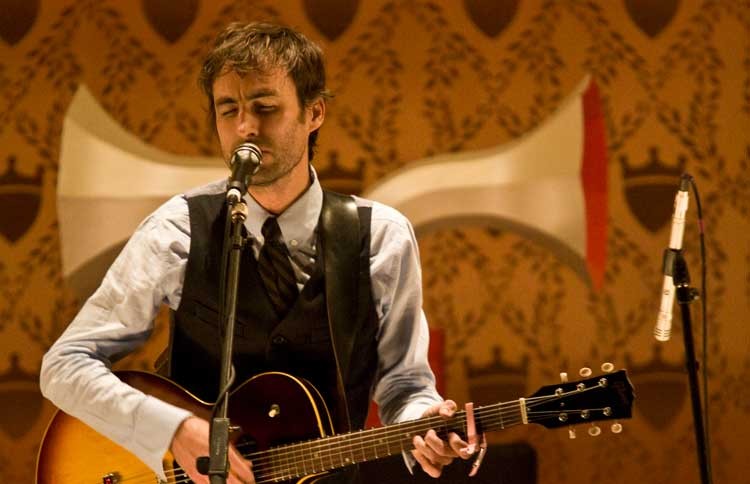 Andrew Bird is an engaging songwriter, whistler and multi-instrumentalist whose Suzuki-honed craft is respected by fussy critics and casual listeners alike. “Break It Yourself” (Mom + Pop), his most personal record to date, explores a new style of songwriting and complex, yet effortlessly played arrangements of imaginative pop songs. Lucky sock monkey in tow, Bird braves the heat to play Lewis Ginter Botanical Garden on July 11 with gospel legend Mavis Staples.


Style: You began playing music at the very early age of 4. When did you find your voice?

Bird: Not until I joined a rock band when I was 19. Even then it took a while before I could think of myself as a singer. I was very musical as a kid and whistled a lot. I remember being in the backseat of my parent’s car singing or humming and one of them said something along the lines of, “You shouldn’t consider a career in singing.” My parents were very supportive, by the way, so it was just a casual comment. But there’s a lesson for parents. Kids listen to what you say. I never forgot that and just never tried to sing until much later on.


My understanding is that this album came together fluidly, with quite a bit of each player doing their own thing. Tell me more about that experience.

As opposed to other records where you kind of deconstruct the song to put it back together on a record, I coached this one more with a performance ethic. We weren’t trying to nail a record, but just rolled tape while we were trying to figure out how to play these songs. Something about that lack of expectation and pressure led to a really nice, fluid style of playing that you can hear that way.


Some of the best writers have the ability to create characters and stories so compelling that the listener is convinced it’s a confessional. How personal are these songs?

I never considered myself a confessional songwriter. This record is as close as I’ve come to putting personal things closer to the surface. Of course, that stuff is in some way always there, but how much I’ve encrypted it has always varied. But with this one, it’s all based on personal experiences.

The exception would be “Lazy Projector,” where at the beginning of the song it’s talking about the end of a relationship and the editor in the head that decides what you remember from that experience. You don’t have much control of that editor that kind of gives you snapshots of when you were with that person. Are the memories good ones or bad ones? This song is skeptical of that editor. Then, the back half that sounds more confessional is really the song I wrote for the Muppet movie that didn’t get used. I took the references to purple fur out.


You’ve referred to playing ideas in your head as opposed to say, constructing a pop song. Do you find that your creative process is fairly consistent?

I typically don’t like to do the same thing twice. I always like to be in some kind of uncomfortable situation. I think it’s a good sign if you are somewhat embarrassed about the songs you are writing, in so much that you are questioning if you are really supposed to reveal these things. The thing that’s consistent is the lack of consistency. It’s kind of like an amoeba. Ideas are floating around in your head, and they attach themselves to songs like molecules and then break off and attach to other songs. When you capture that on a recording doesn’t mean it will stop happening. I have little snippets of melodies in my head that I’ll play and then butt it up against another idea and see if they complement each other.


You’ve fused genres over twelve albums, composed a score, the list goes on and on. Is there anything you would like to try artistically that you haven’t yet?

I’m having trouble putting it into words what I would like to do next. I’ve touched on it in some of the instrumental music I’ve done, but I haven’t really come up with what to hang it on. It’s more like ecstatic playing and recalls religious folk music of Mediterranean areas. I hear it in the music of North Africa as well. It’s a very melodramatic thing and I really feel it when I’m playing it.


Let’s talk about the legend, Mavis Staples. You are playing Richmond and a handful of other shows with her.

We played a show in Chicago together at The Hideout Block Party and I was beside myself with excitement beforehand. She played right before us and it was the best rock ’n’ roll show I’ve ever seen in my life. I could care less if we played with The Rolling Stones, but Mavis Staples is Mavis Staples! Her records from the late ’50s and early ’60s are so moving. I used to listen to a compilation by The Staples Singers before every show to remind myself what music is supposed to feel like.


What’s the most impressive thing about Ms. Staples?

One thing that’s remarkable is that she’s survived decades when other soul musicians lost their groove, so to speak. How many people came out the other side of the ’80s with their aesthetic intact? Her band is incredible and so tasteful. That ecstatic, religious music that I was talking about earlier is something you get from Mavis too.


What’s up with the dapper sock monkey that seems to follow you around? He’s always propped up on stage, atop a speaker.

That was made by a woman from Toronto. She made one for everyone in the band and I just got really attached to mine. You get a little superstitious when you play every night and if he’s not there, it feels like something could go wrong.


Does he have a name?

No, that’d be silly. A name would just be too cute and he’s cute already, so that’s the problem. He’s just The Monkey.