Has Bryan Park shaken off its clandestine reputation in time for it's 100th birthday? 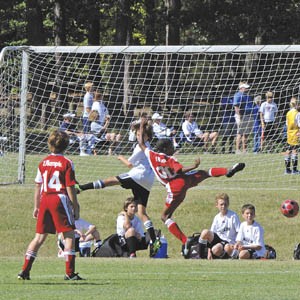 As Bryan Park prepares to celebrate its 100th birthday, has it finally shaken its reputation as a gay cruising spot?

For decades, the 262-acre North Side park has been a destination for stunning spring azaleas, peaceful woodland strolls and dudes looking for dudes. “Shelter parking lots or just drive around the Azalea loop,” advises the website cruisinggays.com, which lists popular spots for men to meet men, including Bryan Park. “Warnings: Undercover cops cruise the area periodically.”

From 2000 to 2004, police reported 81 incidents of indecent exposure in Bryan Park, as well as a handful of busts for prostitution.

But from 2005 to 2010 there have been no police reports of indecent exposure in the park (and just two prostitution incidents, both this year), according to the city police crime database. In 2008, there was one report of a “suspicious package,” but we're assuming that's unrelated.

“We've seen a similar decline in the loitering of, um … unsavory, unattractive … well, we've seen a decrease in loitering and in cruising activity,” says John Zeugner, president of Friends of Bryan Park.

Zeugner credits active park users for pushing out cruisers: the Richmond SEAL Team training classes, Central Virginia Soccer Association games and the ever-present disk golf players, who have ranged over the park from sunup to sundown ever since the city installed a course in 2007.

Also, Zeugner says, “as the park has been better maintained, we've seen a decline in inappropriate behavior.” Efforts to curb cruising began in 1995, when concerned residents convinced the city to close most of the park to vehicle traffic. Gates that automatically close at sundown were installed about 10 years ago. Just this year, the city spent $600,000 to spruce up the park, adding a retaining wall to Young's Pond and restoring the lake and fountain in the azalea garden.

The soccer association, in conjunction with the city, has also been planning to build a modern, $210,000 restroom and storage facility near the soccer fields. Currently there are port-a-potties and, as Zeugner puts it, “old and kind of unsavory bathrooms.”

Despite the improvements, public perception has been slow to change, Zeugner says. He hopes people will come out for the big centennial celebration on Saturday, Sept. 25, and see the new Bryan Park firsthand.