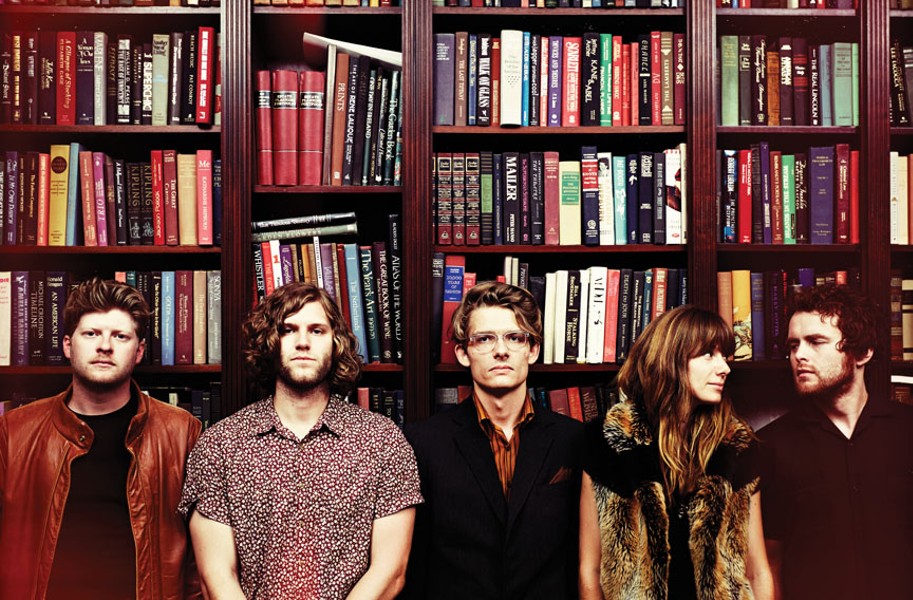 Don't call Avers a supergroup. Sure, it's composed of folks who play in bands you know and adore: HyperColor, the Head and the Heart, Farm Vegas, Mason Brothers and the Trillions. But when Style Weekly caught up with Avers at Lemaire its members were eager to explain that the group isn't just another side project. And they really wanted to figure out exactly why Daryl Hall of Hall & Oates was downstairs.

"He was just checking in," says J.L. Hodges, positively giddy having caught a glimpse of the pop icon. It takes several moments before we're able to regain focus and discuss Avers, but talk of random encounters is the perfect segue, given the band's unplanned beginnings.

"I still marvel at how this all came together, purely by chance," James Mason says. "Adrian [Olsen] and I had a mutual friend and we just talked about doing something. It's kind of magical."

Following the discussion of some musical endeavor, time opened up at Montrose Recording, owned by guitarist Olsen, and the current members showed up. What unfurled was a band with no expectations, no boundaries — and certainly no plans to be a supergroup. Avers embraces collaboration and mutual admiration that verges on cultish in the best of ways, to the point where tongue-in-cheek monikers are given to various band members.

"We joked that we were basically making what you might call psychedelic music, so we should be a cult," says Mason, aka Brother Rainbow, laughing.

Kidding aside, singer and bassist Alexandra Spalding acknowledges that members leveraged the nuances of solitude for inspiration. "On the spiritual side of things, whenever we had an issue with where to go next with a song, we'd ask Brother Horse, which is what we dubbed the spirits of the studio," she says, laughing.

The band wasn't conversing with some imaginary creature, but rather the quiet space not found in usual recording studios. "We'd go out by the bonfire and consult the Horse and have conversations with each other fully intending to figure out the situation and feel what's happening in the moment," she says.

Located off the entrance to a 240-year-old house, Montrose Recording is the "perfect place to get lost," both geographically and mentally, Spalding says — bonfires and all. The studio is chock full of vintage equipment used by a host of past Richmond luminaries such as Mark Linkous of Sparklehorse, and it all harnesses something familiar and inviting, perhaps the cornerstone of Avers' musical signature.

"Montrose is the nucleus," says drummer Tyler Williams, known for his nationally popular Sub Pop band, the Head and the Heart. In just eight days, 10 songs were born, according to guitarist Charlie Glenn, "a remarkably short amount of time in this day in age." It would be the genesis of the band's debut album, "Empty Light."

So far Richmonders have been treated to only two songs via Soundcloud, but recent performances across the East Coast have showcased an unpretentious exploration of sound, as spontaneous as their origin and shaking with intensity and passion. While its vibe has been called psychedelic, there's very little of Avers that can be compartmentalized. Its sonic world is a complex animal. The dreamlike expanse of woozy guitar trails might have you gazing off, but when you least expect it, intense percussion bites you in the ass. Ultimately, it may lay you down with the playful lick of strummed guitars, or push you back into another dimension.

"This is the first time I've been in a band where I thought it would even be remotely a good idea to write lyrics together," Hodges says. "We were open to what each other suggested and built up a weird trust that came together quickly. From the first night, it was collaborative." It's that spirit that makes it awkward to call the whole affair supergroupy, side project or otherwise.

"We all have other bands," Williams says, "but it's about wanting something so badly that you'll take up your off time with it. The way it came together bonded us in this way, so now we have to follow that."

Though the debut is mastered and named, the members aren't quite sure when they'll release it. "We're waiting to see what happens," Williams says. "We're out playing some shows and having a great time, but there's no rush to release the full record just yet. Our objective now is to let people hear this, piece by piece."

There are plans to hold more creative sessions to "keep the spark alive," Spalding says, adding that "we want to see where we go as a band." That said, the one definite thing the six-piece has planned is more touring. They've put out feelers to play festivals, including the Austin Psych Fest in May. "I think July is going to be a busy month for us," Williams says.

As for how that will play out across a group of musicians with other commitments, they have no worries. For now, they've shared their individual schedules and booked shows in the time they have off. And when the band hits the road, it looks like the van will be filled with smooth sounds. "I'm gonna bring so many Hall & Oates tapes when we hit the road again," Hodges says. S

Avers plays Strange Matter on Saturday, Feb. 1, at 9 p.m., with White Laces and Sleepwalkers. Tickets are $8. People 18 and older admitted.