Spider-Man and Obama? The First Nerd Sells Out 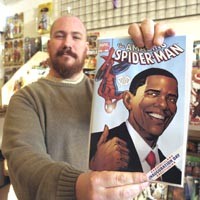 Before he'd even been sworn into office, Barack Obama was already doing his part to stimulate Richmond's economy — with a little help from Marvel Comics.

Customers lined up outside the door of Velocity Comics at 904 W. Broad St. last week to snap up a limited edition version of Amazing Spider-Man No. 583, which features the hero sharing the cover with Obama.

Inside the comic, Spider-Man teams up with the new president to foil an Obama imposter at his inauguration, earning Obama's thanks — and a fist bump — for a job well done. (Obama, our historic first fan-boy president, said on the campaign trail that he collects Spider-Man and Conan the Barbarian comics.)

Velocity owner Patrick Godfrey was selling the ultra-rare Obama cover version for $14.99 — far less than the $70-plus bids it fetched on eBay. Velocity sold out Jan. 14 in about 20 minutes. A larger second printing of the comic available Jan. 21 is also expected to sell out.

Though Godfrey intended to limit sales to one copy per customer, one local evildoer foiled his plans, he says: “He was one of the first people in line, and he brought five bums in with him. We didn't catch it until we saw them giving him the copies outside. ... He played his scam well.”

Where's Spidey when you need him?