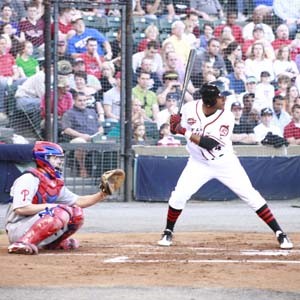 A former Richmond Flying Squirrel, Darren Ford, is getting a nice souvenir of his two months in the major leagues: a World Series ring.

The 25-year-old outfielder was called up Sept. 1 by the Squirrels' parent team, the San Francisco Giants, which won the series against the Texas Rangers on Nov. 1. “He's the only Flying Squirrel who's appeared at the big league level,” says Jon Laaser, director of broadcasting for the Squirrels.

Ford scored the game-winning run in his first Giants appearance, breaking a tie game against the Colorado Rockies — and that was after a delayed flight kept him from arriving at the ballpark until the second inning.

“I'll say this, the kid didn't hesitate. He can fly,” said the Giants manager, Bruce Bochy, about Ford in an Associated Press article about that game.

Ford was used as a pinch runner in seven games with the Giants. And although he sat in the dugout during the playoffs and World Series, he'll still get that ring, which has yet to be made.

What Ford, a New Jersey native, will be doing next season isn't clear. Depending on how he performs in spring training, there's a possibility the Giants will move him to their Triple-A team, the Grizzlies of Fresno, Calif.