Special Ed and the Shortbus 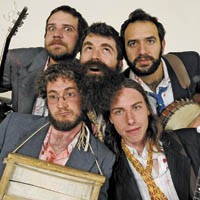 That we should all live to see the day that Special Ed and the Shortbus, Richmond's beloved, absurdist string band, should become respectable. And in only six years.

"It's funny … our sound has changed a lot," says Josh Bearman, mandolinero/vocalist for the group (and Style music critic). Where once it was eight, time and temperament have shaved the band down to a tight, high-energy core of five members. In the beginning, Bearman says, there was much flailing. "Well, there really was no direction."

But unfortunately for the band's baser impulses, it did mature, and talent asserted itself. It's telling that of all the 21st-century bluegrass and old-time music outfits out there adopting the manner of their ancestors, it's Special Ed's fiddler, Aaron Lewis, who won the top prize for bluegrass fiddle at last year's Old Fiddler's Convention in Galax.

The focus and polish is an interesting counterpoint to the band's satiric approach to music-making, that absurd aesthetic that now includes short films and tune-filled plays. Anything but the normal stuff.

Bearman is weary of the "ubiquitous, hokey nostalgia that is just so prevalent." He says the old-time bands writing about "their old dog and moonshiners in the hills" — subjects they know nothing about — is disingenuous.

Which is why they tend toward the satiric subjects, why they'll write songs like "Don't Worry About the Poor" and "Sell Your Babies to the Army" from ultra-right-wing perspectives. It's why they all married one another onstage during a skit commenting on the gay marriage ban. It's why, for a long time, an armpit-fart solo was an essential part of the act.

"We spend a lot of time on dada nonsense," he says. "But not so much toilet humor anymore." A direct result of the loss of their underarm flatulator.

"I can understand why people wouldn't want us," he says. The band's name has been as much a burden as a blessing. Sure, there are folks who are drawn by curiosity, but as the band becomes more serious in their musical approach, being unable to play respectable venues like Ashland Coffee & Tea begins to sting. And Bearman's aware that there are people who stay away from Shortbus shows because of the name on the marquee. "From our point of view, we'd rather that they at least come and were offended," he says.

At any rate, there's a lot to consider now. The Shortbus has begun incorporating klezmer into their mix, a blend of traditional and wildly unhinged music well-suited to the band's personality. It's another element that separates them from other old-time bands, defines them as something hard to define, except perhaps as a lost child of Frank Zappa. "It should be pretty much anything goes," Bearman says.

The band's taking its first grown-up trip across the pond, touring Europe in the fall. They'll be hitting the Edinburgh Fringe Festival and some others. There's also a Midwest tour in the works. But Bearman's excited about Europe — he expects the Continental attitudes to be more receptive to the band and its name.

Somewhere in there, they'll launch their next project, an outgrowth of the Halloween show they did last year: the zombie string band album. For a band that eschews old dogs, an album of zombie tunes is the logical next step. What's really scary is that, with the kind of talent and ambition they're playing with now, a ballad of the world's saddest zombie might become the new old-time; "Grandma's Brains" might become the standard of tomorrow.