A light but sturdy drama, “The King's Speech” stutters a bit in its conclusion. 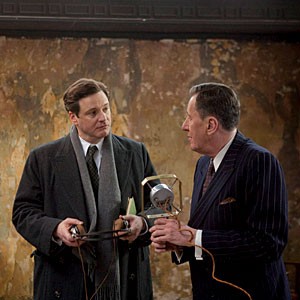 A movie about a guy learning how to overcome a speech impediment doesn't sound all that exciting.

To be sure, “The King's Speech,” about the relationship between the Duke of York (Colin Firth) and his speech therapist (Geoffrey Rush), greatly benefits from the high profile of its characters. I suppose there's a lot at stake when the stutterer needs to deliver a worldwide radio broadcast about the Nazi threat, although “The King's Speech” also gets at the discomfort and embarrassment of stammering that anyone would feel.

The movie also offers the kind of sturdy acting, well-written script and nice touches of detail you hope to get from a period film. And though it suffers a little from staginess and conventional pacing, the movie even manages a few moments of inspired cinematography. “The King's Speech” ultimately falls short of momentousness, but it's a mildly enjoyable drama which shows that everyone, no matter how lofty his or her station, has demons to contend with.

The duke's problem is that he stutters, badly. We first see him at Wembley Stadium, trying to give an address at the behest of his father, King George V (Michael Gambon). We don't know if he finishes but if the movie stuck around to find out it would probably have been too long for one sitting.

In one example of the duke's attempts at a remedy, a quack instructs his lordship to stuff his mouth full of marbles in “the classical cure” favored by the Greeks. “How many has it cured since then?” asks his wife (Helena Bonham Carter), who then seeks out the advice of Lionel Logue (Rush), an eccentric therapist and minor Shakespearean actor. His name seems like one that would give the tongue twisted trouble, but Logue conducts himself like a Svengali; a cure seems imminent. The movie has other plans, however; it's not always so easy, we learn, for a king to take the kind of personal, intensive therapy required to treat such an affliction, much less make it work.

One of the film's strengths is its ability to make us care about the duke's impairment while taking excursions into the rigors of royal life to show why it's so important that he overcome it. King George V dies, and the ascension to the throne by the duke's brother (Guy Pearce) leaves the country in some turmoil. He's capable and the people adore him but he decides to abdicate to marry a divorcee (Eve Best). The crown and incumbent responsibility of radio addresses fall upon the head of the duke, now the king, and the times are serious. Hitler is invading Europe; Churchill (Timothy Spall) looks more somber than ever.

In this way we get two or three stories in one, the personal one about the stammering problem but also a look at the inner workings of a royal family and how important that family's health is to the nation it reigns over and its place in the world. At the same time, however, the movie begins to have trouble maintaining its own qualities. In providing a lot of interesting details in a brief amount of time, many of the minor characters, as important as they were in real life, come off as wax figures. We get a lot of Churchillian jowly elocution, for example, but the man says very little. Similarly, while the movie appears to relish showing off the royal progeny, princesses Margaret (Ramona Marquez) and Elizabeth (Freya Wilson), it doesn't have much to say about what kind of queen the latter would go on to become. Derek Jacobi is wasted as an anodyne Archbishop of Canterbury.

These gripes are minor in comparison to the movie's bigger flaw, which is an inability to wrap everything up convincingly. “The King's Speech” seems set up to deliver something big at the end — a cure, a revelation, or a cathartic moment between the king and his therapist — but the version we are given is somewhat of a letdown. (If one wanted to quibble further, one could point out that the problem overcome in this climax was actually solved at the beginning.) It involves an important speech, of course, and though the stakes are made to seem very high, by this time we've lost some focus on the king. He seems relieved, and we're glad, of course, but perhaps left wanting a little more to warrant a movie on speech therapy. (R) 111 min.