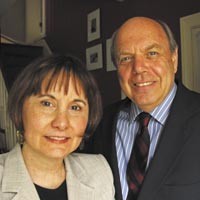 A leadership shakeup at SPARC, the School of Performing Arts in the Richmond Community, has led to the abrupt retirement of Larry and Jennifer D. Brown, long the heart and soul of the city's youth performing-arts-training program, sources say.

What precipitated the Browns' exit was unclear at press time. Both, however, say they'd been planning retirement long before recent events.

Last week, a source confirmed that Randy Wyckoff had been brought on in a temporary capacity to manage the organization, saying that the Browns' departure was not entirely voluntary.

Wyckoff, a well-known executive for hire with a reputation as an interim leader for organizations in transition, says he's been retained by SPARC, but declined to discuss the circumstances of his arrival. Wyckoff, a 35-year veteran of the financial industry, is former executive director of the Children's Museum of Richmond, where he arrived in 2003 in part to lead an overhaul of that nonprofit.

Wyckoff referred questions to the group's board president, Jerry Samford.

A woman answering the phone at the organization's office early last week professed unawareness of Jennifer Brown's departure: “She's on vacation right now,” she said, indicating it was “the first I've heard” of any possible leadership shake-up. She also referred calls to Samford.

The Brown's history with SPARC is long, and also central to the organization's growth as the area's premier private performing arts program for young people. The school was formed in 1981, with Jennifer Brown working as an assistant instructor to founder Jeri Cutler-Voltz.

When Cutler-Voltz died in 1998, Brown became executive director, and her husband was brought on. In the 11 years of their leadership, the organization grew from serving about 200 children a year with a budget of less than $200,000 to one serving more than 10,000 pupils statewide on a $1 million budget.

SPARC, which has always counted on rented space and cooperation from area schools, recently bought a building on Hamilton Street. Most recently, Jennifer Brown served as artistic director and Larry Brown as managing director.

A few hours before press tme Monday, Samford issued a statement confirming the Browns' retirement effective June 15, and praising the couple for their service and SPARC's growth.